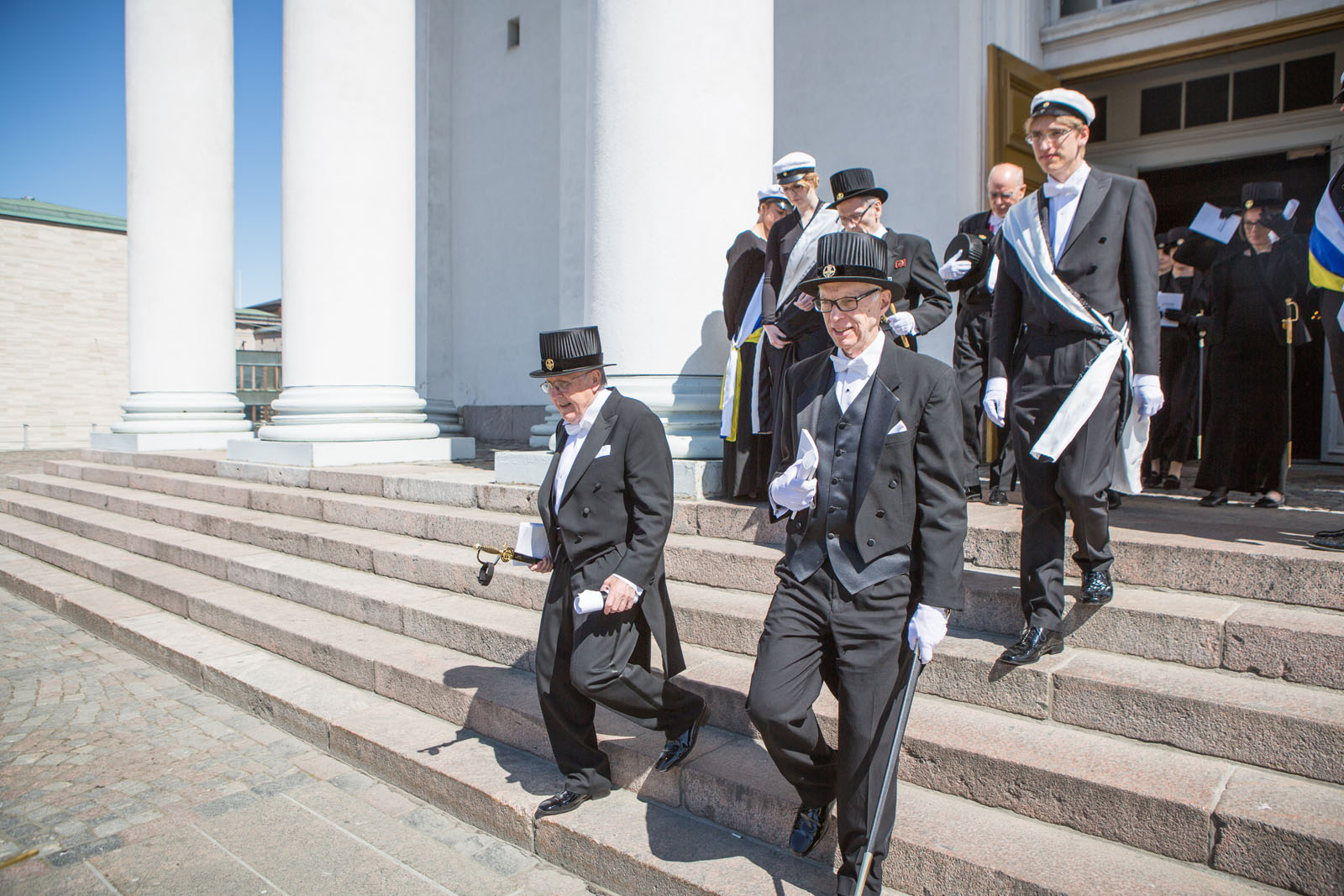 Sociology Professor Douglas Maynard, center, leaves the Great Hall at the University of Helsinki after receiving an honorary doctorate. With him are other honorary degree recipients as well as doctoral and master’s degree graduates. (Photo: Mikka Verto)

Sociology Professor Douglas Maynard has received many honors in his career but until recently, they never came with a sword.

Maynard studies conversations as varied as police interrogations, survey interviews, and casual interactions. His goal: understanding what makes them work well or go awry. An affiliate of the Center for the Demography of Health and Aging and the Waisman Center, he is currently investigating the testing and diagnosis of autism spectrum disorder and end of life conversations in cancer care. In June, the American Academy on Communication in Healthcare presented him with the George L. Engel award for outstanding research contributing to the theory, practice and teaching of effective health care communication and related skills.

It’s a notable achievement. But for grandeur, it couldn’t quite compare to the honorary doctorate Maynard received in May as part of graduation at the University of Helsinki in Finland. As he and his wife, Joan, learned, the Finns take the recognition of their doctoral and master’s students quite seriously. It is a three-day affair that includes a seaside picnic, a ball, an ecumenical service, and a nocturnal procession through campus to a hilltop observatory, culminating at sunrise.

And of course, the presentation of the sword – which signifies the “sharp” quest for knowledge and truth, Maynard says.

The sharpness wasn’t merely symbolic. The day before the degrees were conferred, the honorees gathered at Helsinki City Hall for a sword-whetting. As the whetstone was doused with champagne, Joan Maynard served as the “swordwhetteresse,” turning the stone while her husband held the blade to its edge. 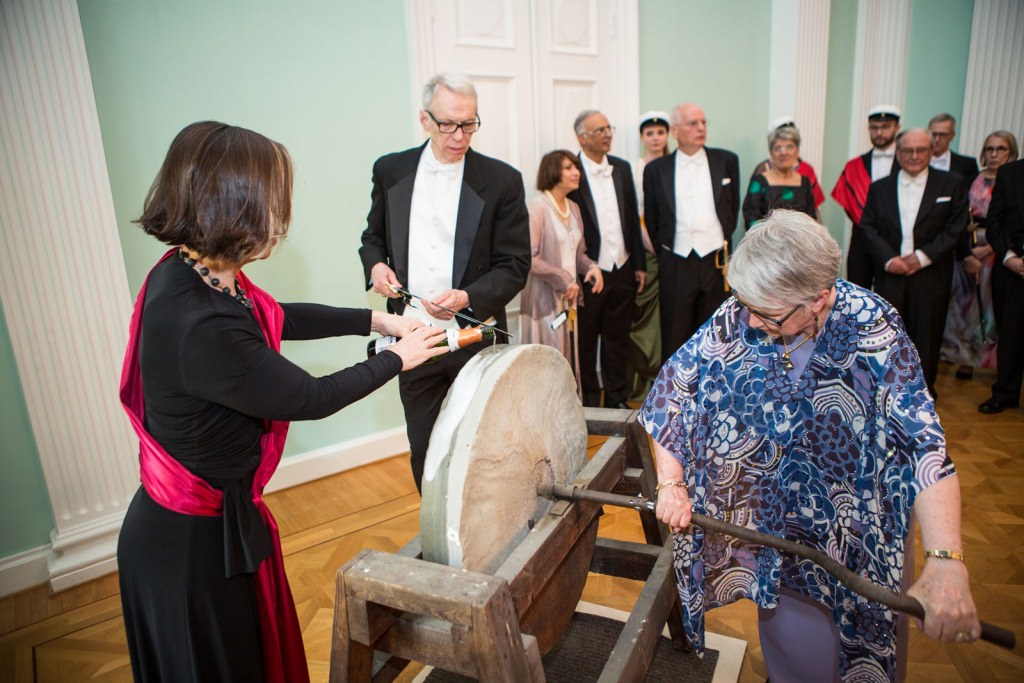 The next morning in the university’s Great Hall, Maynard received his honorary degree as well as a top hat, representing freedom of thought. 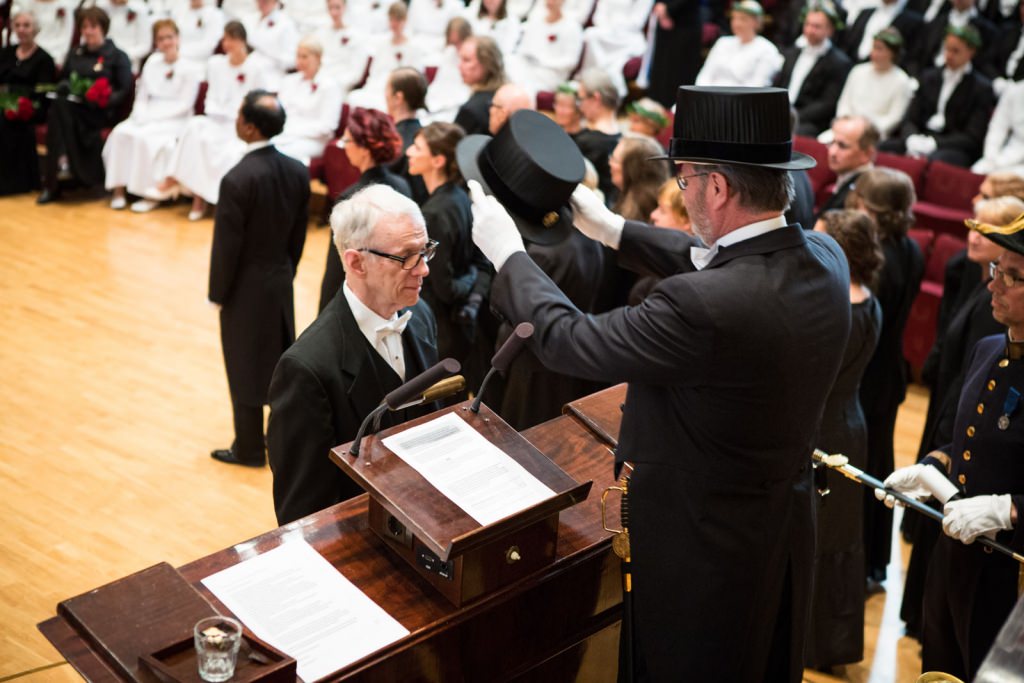 Degrees in hand and swords on hip (a process admittedly more difficult for the female honorees, who were cautioned that most dress fabrics couldn’t support the weight of the blade), the recipients joined a procession to a cathedral for an ecumenical service. 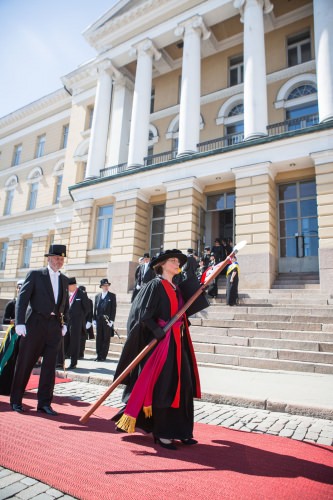 Here’s how Maynard describes the experience:

“All of it was fun – the food at every meal was wonderful and, even though much of the ceremony speeches were in Finnish, the sense of welcome and honor was very palpable throughout the three days. But the best part was the ball on Saturday night. It was filled with what the classical sociologist Emile Durkheim called ‘collective effervescence.'”

The new Ph.D.s, master’s graduates and honorary doctors gathered for dinner and dancing, both organized and spontaneous. Each group did the polonaise, a Polish dance that dates to the 15th century.

“We had to learn on the spot but it wasn’t too difficult,” Maynard says. “It involves stepping forward arm in arm with your partner, bowing inward to one another, then another step and nodding outward to the people on the side, then more steps and nodding inward, then outward.”

“The speeches were about celebrating the community in which social scientific investigations occur. Helsinki is having its own budgetary problems like UW and many of the speeches were about the importance of funding university research and education, and you could feel the sense of a ‘community of science’ and an orientation to the collective good – not just for the university but for the whole society.”

After midnight, as some participants headed out on the late-night trek around the city, the Maynards went to get some rest — grateful, Maynard says, to have been part of the experience and impressed by the Finns’ reverence for scholarship and tradition.

“It has made me feel that we Americans need to recover the sense of ceremony surrounding educational achievements,” he says. “Ours seem so perfunctory. Actually we’re trying to do something in our department about this and, for the first time this year, had our own separate celebration for the undergraduates who completed their degree in our department. We also have a separate departmental Ph.D. and M.A. celebration. But these are nothing like the Finns!”

The celebrating done, there remained the dilemma of how to get the sword home. It clearly couldn’t be carried on and it was too long to fit in a suitcase, so the university is shipping it and the hat to Madison.

“They haven’t arrived yet and I’m not sure what we’ll do with them,” Maynard says, “but probably hang the sword somewhere and maybe put the hat on a bookshelf.”