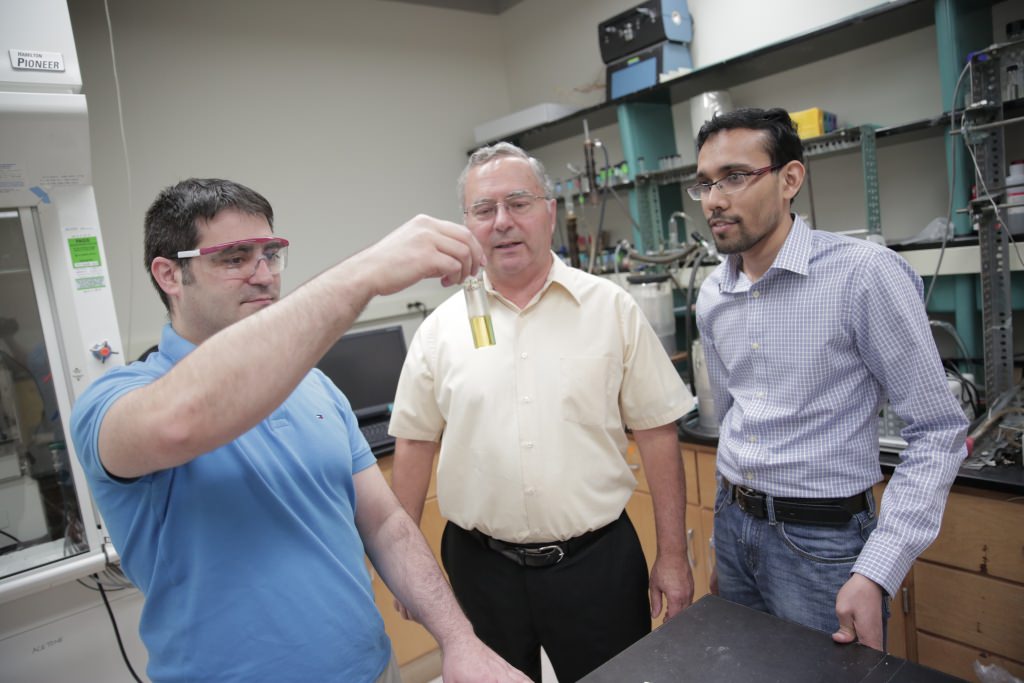 UW–Madison engineers, from left, David Martin Alonso, James Dumesic and Ali Hussain Motagamwala, examine a vial of furfural, one of a group of valuable products the researchers can now create as part of the biofuel refining process. Stephanie Precourt/UW-Madison Engineering

Technologies for converting non-edible biomass into chemicals and fuels traditionally made from petroleum exist aplenty. But when it comes to attracting commercial interest, these technologies compete financially with a petroleum-based production pipeline that has been perfected over the course of decades.

Winning that competition — or at least leveling the economic playing field — requires a leap forward. And by developing a new process for obtaining not one, but three high-value products from biomass in one fell swoop, University of Wisconsin–Madison engineers and their collaborators have now made that leap.

The researchers, led by James Dumesic, professor of chemical and biological engineering, published their results today (May 19, 2017) in the journal Science Advances.

Their new process tripled the fraction of biomass converted to high-value products to nearly 80 percent, also tripling the expected rate of return for an investment in the technology from roughly 10 percent (for one end product) to 30 percent. 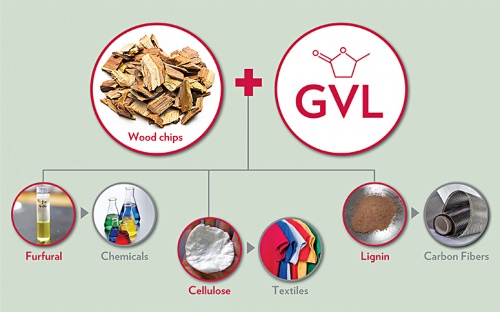 UW–Madison researchers and collaborators have developed a new “green” technology for converting non-edible biomass into three high-value chemicals that are the basis for products traditionally made from petroleum. Graphic courtesy UW–Madison/Phil Biebl

“When a technology is new and risky, proving its economic feasibility and profit potential is critical for attracting investors,” says David Martin Alonso, the study’s first author and a researcher in chemical and biological engineering at UW–Madison. “That’s why we are very excited about its 30-percent internal rate of return.”

Alonso is also director of research and development at Glucan Biorenewables, a UW–Madison spinoff company co-founded in 2012 by biomass conversion technology pioneer Dumesic.

The magic key for turning all three components — cellulose, hemicellulose and lignin — of lignocellulosic (non-edible) biomass into distinct high-value products is gamma valerolactone (GVL), a solvent that is derived from plant material and has several highly appealing properties.

“GVL is very effective at fractionating the biomass,” Alonso says. “But it is also much more stable than other solvents, allowing us to reuse 99 percent of it in a closed-loop process. Until now, solvent loss had been a major bottleneck for making a renewable and carbon-efficient bio-refinery economically feasible.”

It also explains why the new technology is so “green.” It starts with renewable biomass, has a very high solvent-recycling rate, needs miniscule amounts of acid, and uses all three fractions of biomass, minimizing waste. And the list of GVL’s advantages goes on.

“GVL is also feedstock-agnostic,” says Ali Hussain Motagamwala, Dumesic’s doctoral student and a co-author on the paper. “We have demonstrated that it works on corn stover, switchgrass, hardwood trees like white birch and poplar, and softwood trees like loblolly pine. In fact, we have shown that it is an effective solvent for more than 30 types of biomass.”

Several industry sectors may benefit from the new technology. Pulp and paper mills can turn two currently unused biomass fractions — hemicellulose and lignin — into commercial products, in addition to making paper from cellulose. With an additional step that increases its purity, they can also spin cellulose into fibers to produce textiles.

Car manufacturers can convert plant-derived lignin into carbon foam and fibers, avoiding the sulfur smell that reduces the appeal of lignin derived from other sources. Scientists at the University of Tennessee, who are co-authors on the study, demonstrated that lignin can also be used to make battery anodes, traditionally made from more expensive graphite.

Last, but not least, the new technology converts hemicellulose into furfural, a chemical intermediate that is the basis for a variety of plastics, polymers and fuels. Too expensive to be produced by U.S. companies, furfural is imported from China.

“Depending on furfural from China, and on petroleum from OPEC countries, means that the market is volatile,” Motagamwala says. “But since biomass is something every country has, bio-refineries may create a more stable market.”

Dumesic says the next challenge is to de-risk the technology.

“Now that we have proven that GVL is very effective at separating the three biomass fractions without diminishing their value, we see a path forward to becoming cost-competitive with a petroleum refinery,” he says. “Our next goal is to demonstrate that this new kind of bio-refinery can deliver a wide range of advanced biofuels and commodity chemicals as end products.”

Larry Clarke, Glucan Biorenewables CEO, will use his company’s platform to scale up the process and help realize its market potential.

“Since this simple, yet elegant and robust technology provides multiple value chain options, I believe it has the potential to transform the global biomass industry,” he says.

Study collaborators include Troy Runge, a UW–Madison professor of biological systems engineering and an expert in biomass fractionation; Christos Maravelias, a UW–Madison professor of chemical and biological engineering who performed the techno-economic modeling; the U.S. Forest Service; and the University of Tennessee’s Center for Renewable Carbon.

Dumesic and several study collaborators are authors on patents related to this work held by the Wisconsin Alumni Research Foundation and Glucan Biorenewables.

This study was funded in part by the National Science Foundation Small Business Innovation Research Program, and is based in part on work supported by U.S. Department of Energy (DE-FC02-07ER64494).