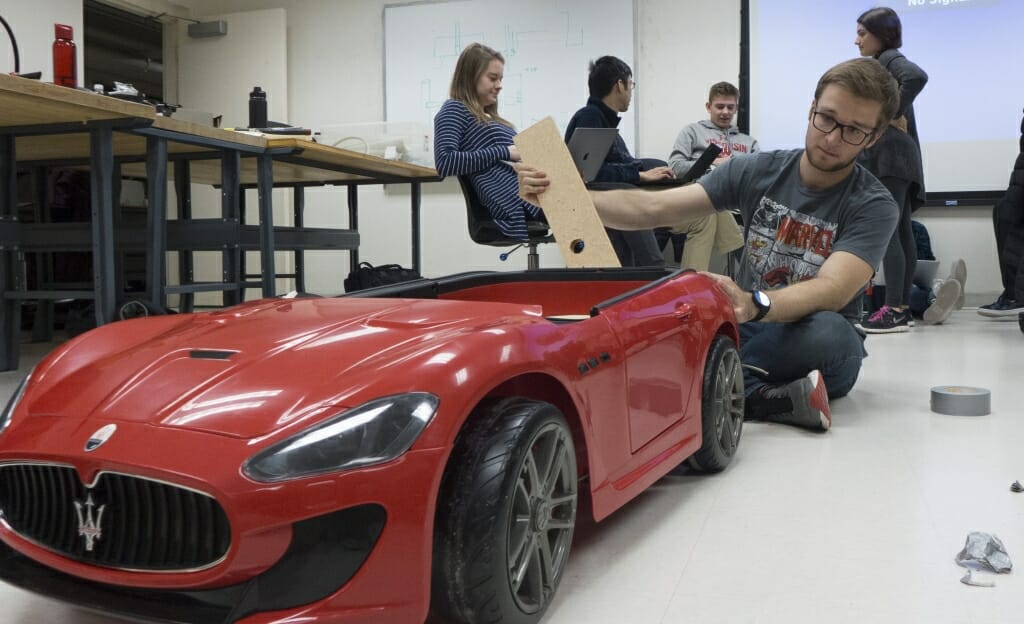 UW-Madison freshman James Charapata, working on a mechanism to allow a parent to steer this car for a child with disabilities, says, “We proved to ourselves we were not crazy, are on a good path, and once we can make it without duct tape…” The freshman design course at the UW–Madison College of Engineering offers satisfaction, he adds. “ I love making people feel like they have control of their world. I have a couple of family members who are less fortunate, and I have seen their faces light up when I was able to help.” David Tenenbaum

A retracting pacifier to ease a toddler sometimes-difficult “weaning” process. A medicine box for a motorcycle that transports health workers to remote villages in Uganda. And a toy car adapted for a child with neurological problems.

It’s all in a semester’s work for one session of an introductory engineering design class taken by about half of University of Wisconsin–Madison’s College of Engineering freshmen.

Thirty projects from all nine sessions of 170: Design Practicum will be displayed to the public in the Engineering Centers Building Lobby, 1550 Engineering Drive, Madison, on Wednesday, Dec. 13, between 4:30 p.m. and 6:30 p.m.

Each project came from an outsider with a pressing need, a brainstorm, or both, says course director Tracy Jane Puccinelli.

The course’s goals blend creativity, fun, cooperation and real-world applications, she says. “This is their first year of college and it’s critical to show some context. They have been working really hard with math and science but may not realize how that applies. They don’t necessarily know what an engineer does, and this class is an opportunity to see what they can do with those skills.”

Students in Interdisciplinary Engineering 170-Design Practicum “are here to play, have fun, explore designs, and see what it’s like to work with a team with different interests, backgrounds, cultures,” says Puccinelli. 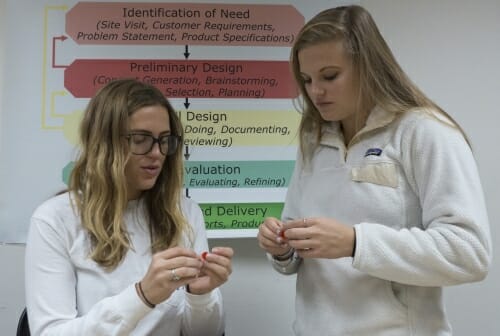 Emma Pappano (left) and Zoe Schmanski wrestle with springs for a pacifier intended to ease a toddler’s liberation from an essential oral appliance. David Tenenbaum

The pacifier group was working on prototype number three, made, like the others, on a 3-D printer. On this day, they were attaching a spring and a screw to slowly retract the pacifier and, at least theoretically, cause the toddler to gradually lose interest in the pacifier. As the group fiddled, Zoe Schmanski, a freshman intending to enter biomedical engineering, remarked, “This is a nice change from the classic math and science classes I have taken. Coming into the lab, I have more freedom. We don’t have to follow standard procedures.”

Emma Pappano, also a biomedical engineering prospect, says Learning SolidWorks [prototyping software] was a challenge. “They throw you in right away … that’s one of the fastest ways to learn anything, especially with this hands-on type of work.” But programming often revealed that thing “that is in your mind should work doesn’t always work. I was surprised at how many times we had to start over.” 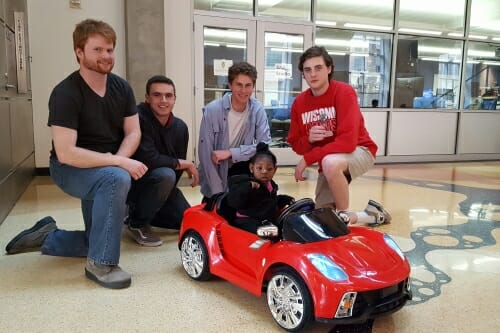 A “Go-Baby-Go” car was adapted by past Engineering 170 students for this driver — a girl named Lundyn. United Cerebral Palsy of Greater Dane County

Matt Jahnke, a social worker who directs adult programs at United Cerebral Palsy of Greater Dane County, has asked the class to build many projects over the years. Projects have included a Frisbee launcher to help a person with limited ability be active outdoors. Mobility is a big focus, Jahnke says. In fall, 2016, “a man came to the Engineering Centers Building on campus in a wheelchair to try out adaptations the students made to his standing frame. Beforehand, he was only able to stand for only 30 seconds at a time. As soon as they strapped him in the new adaptation, he took off and mingled with the other student groups for a half hour. When it was time to go home, his family had to go find him.  That was quite the transformative experience that the students created for him!”

Two factors explain the project choice, Jahnke says. “Generally, these are things that don’t exist in the commercial market, or are really, really expensive. This program has been hugely valuable because it is solving problems for people who usually can’t afford a commercial solution. These impressive young students come up with ideas and creative solutions to problems every year. It is a real pleasure to work with them each semester.” 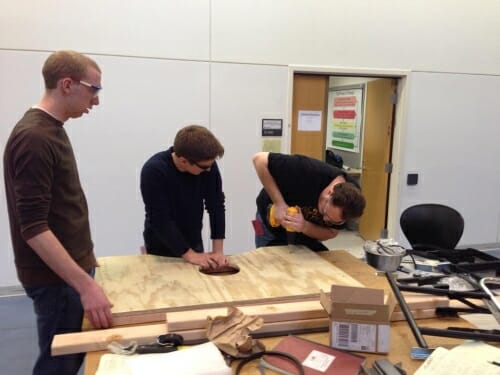 The design class has multiple benefits for students, says Puccinelli. “Freshmen get the chance to experience what it’s like to be an engineer — to solve a problem through the design process. Freshmen often don’t know all of the engineering options until they have the chance to talk with faculty and other students.”

Puccinelli adds that doing a good deed with your hands and your brain — aided by a wisp of technology — helps solve a persistent problem in engineering: broadening participation. “It’s been shown that hands-on design courses correlate with retention for underrepresented minority students. This course shows the context as they struggle through difficult math and science courses, because they can apply science and math to solve a real problem. Having the opportunity to help a real client with a real need inspires students to be truly invested in their projects.”