Eyeball-licking geckos, wiggling brain cells and a whole planet’s worth of weather are among the winners in the University of Wisconsin–Madison’s 10th Cool Science Image Contest.

“The quality of the images and videos produced on campus by scientists and people passionate about science is always so impressive,” says Terry Devitt, a judge and one of the founders of the contest. “It is always a very hard job, but a very enjoyable one, to choose the best among them.”

A panel of nine experienced artists, scientists and science communicators judged the scientific content and aesthetic and creative qualities of the 101 images and videos entered in the 2020 version of the contest, which began as part of The Why Files, one of the first popular science news websites.

Cameron Batchelor and Ethan Parrish, graduate students, Geoscience, for a look at the climate-describing bands of color in a slice of stalagmite.

Natalie Betz, associate director, UW–Madison Master of Science in Biotechnology, and Anya Wolterman, Macalester College undergraduate geology student, for their section of rock from a rift in the Earth’s crust in the Lake Superior region.

Caitlin Carlson, graduate student, Department of Bacteriology, for a view of a pair of leaf cutter ants sniffing out each other’s pheromone thumbprint.

Guilherme Gainett, graduate student, and Prashant P. Sharma, assistant professor, Department of Integrative Biology, for an electron micrograph of the spiny leg of a new species of harvestman arachnid.

Ran Zhang, scientist, and Dalton Griner, graduate student, Department of Medical Physics, for an X-ray of flowers used to test and improve mammograms.

Nisha Iyer, postdoctoral fellow, Wisconsin Institute for Discovery, for a picture of a crested gecko licking its own eyeball.

Robert Morgan, graduate student, and Keith Bechtol, assistant professor, Department of Physics, for a snapshot of thousands of distant galaxies made while hunting for the source of a single subatomic particle.

Michael Petersen, Edward Williams and Ray Collier, all staff of the Wisconsin Crop Innovation Center; and Frank McFarland, graduate student, Department of Agronomy, for their image of the first transgenic hemp plants.

Chris Morrow and Tiaira Porter, graduate students, Department of Neuroscience, for a video capturing the movement of neural stem cells switching from dormancy to activity. 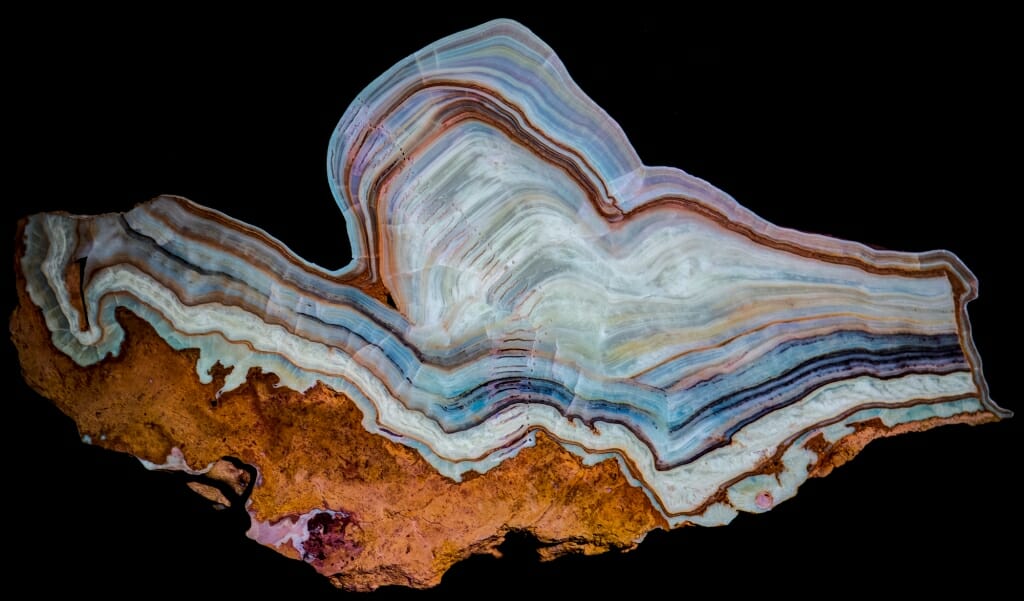 1 This slice of stalagmite — at 250,000 years old, the oldest dated stalagmite in the Midwest — is being used to study the climate of ancient mid-continental North America. The colored layers reflect changes in soil above the cave in which the stalagmite formed, with rich soil (and thicker vegetation) revealed in deeper orange bands and less organic matter (and fewer plants) in light green. 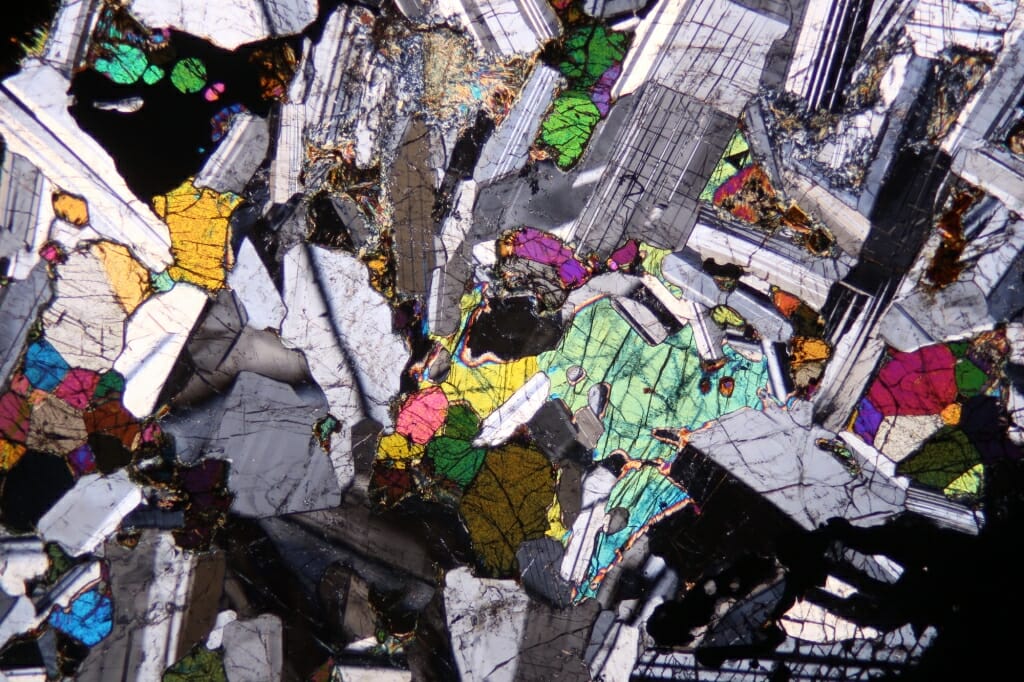 2 This thin section of troctolite, an igneous rock composed of feldspar and olivine, was collected near Duluth, Minnesota, from the Proterozoic Midcontinent Rift. The rift is a tear in the Earth’s crust caused by continental plates colliding in the Lake Superior region. Polarized light accentuates vivid colors. 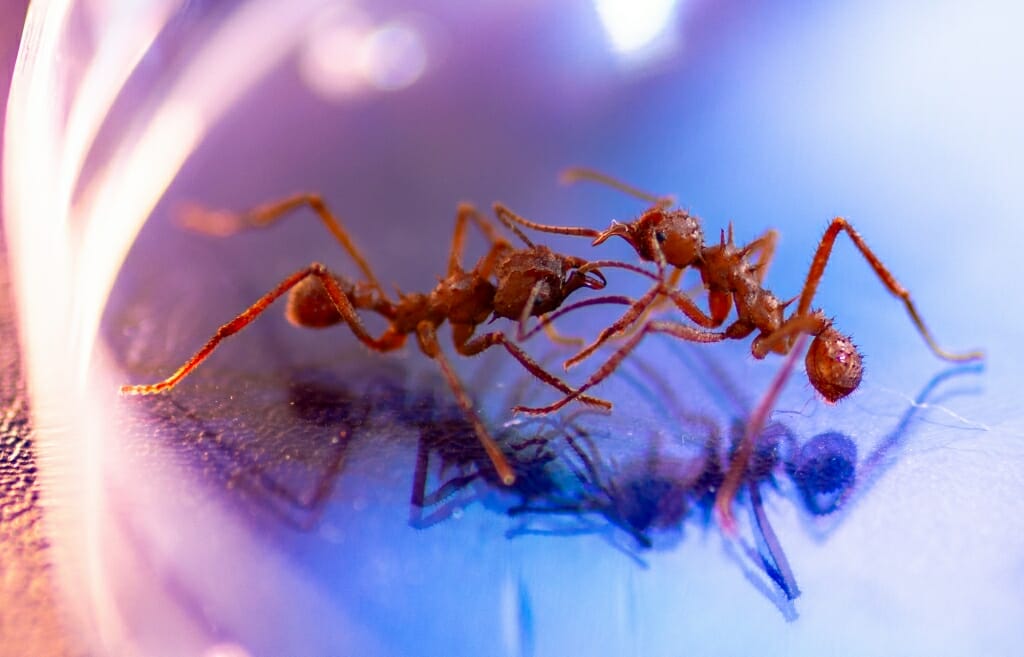 3 Each colony of leaf cutter ants has a unique chemical thumbprint, a combination of pheromones that members of the colony can recognize as their own. These two Acromyrmex echinatior ants from different colonies are inspecting each other’s pheromone signatures. 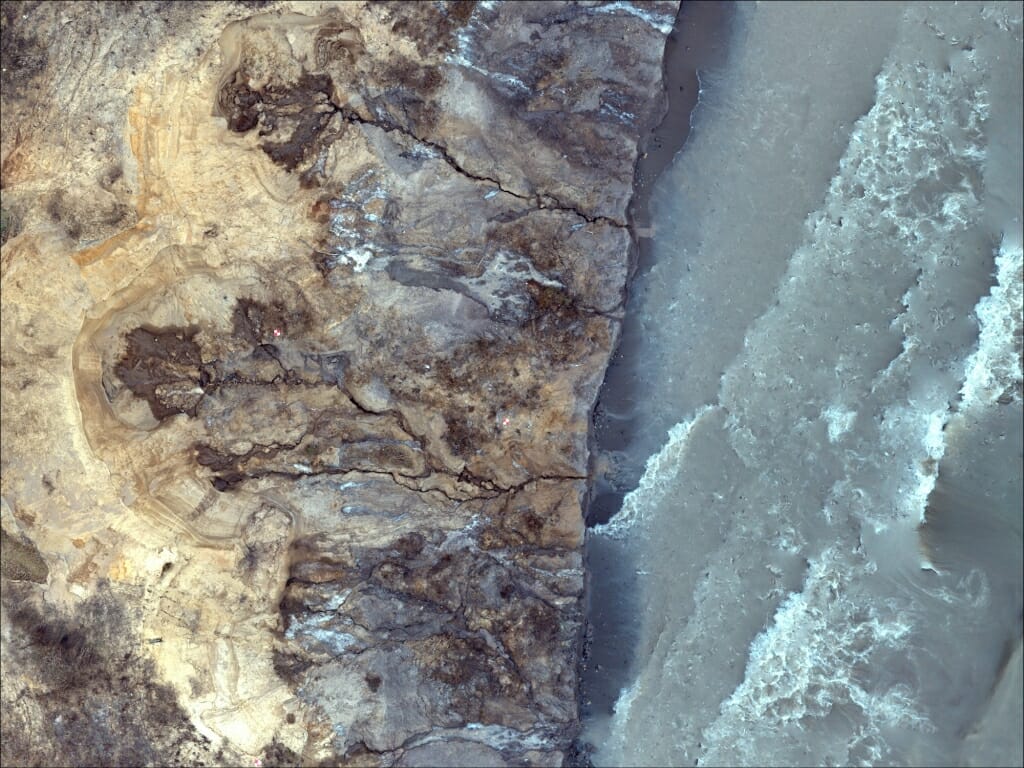 4 Storm-driven Lake Michigan waves cut away bluffs in Warnimont Park in Cudahy, Wisconsin, while the freeze and thaw of seeping groundwater wear at the crest. Researchers study the intertwined effects of waves and groundwater on erosion with three-dimensional models of coastal bluffs based on overhead images captured by drone flights. 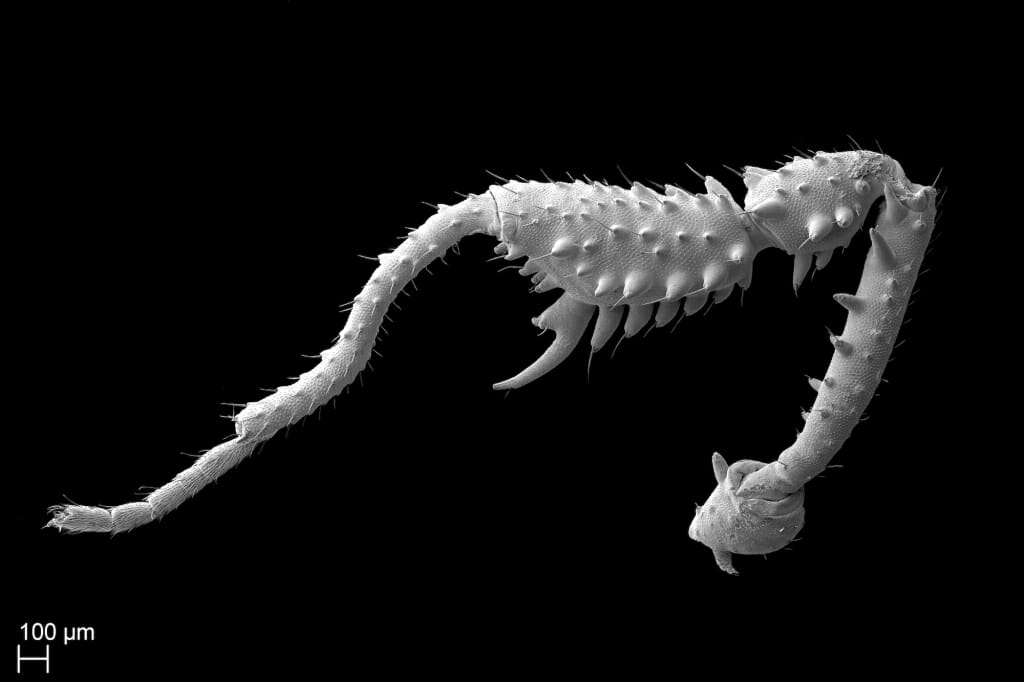 5 The spines armoring the leg of a tiny, newly described species of harvestman, Zalmoxis adze, are a remarkable work of sexual dimorphism — they’re completely absent in females. While leg details were an important way to differentiate this arachnid as a new species, little is known about how the heavy spikes serve males in the leaf litter on the forest floor of Papua New Guinea. But it may be very showy or very violent. 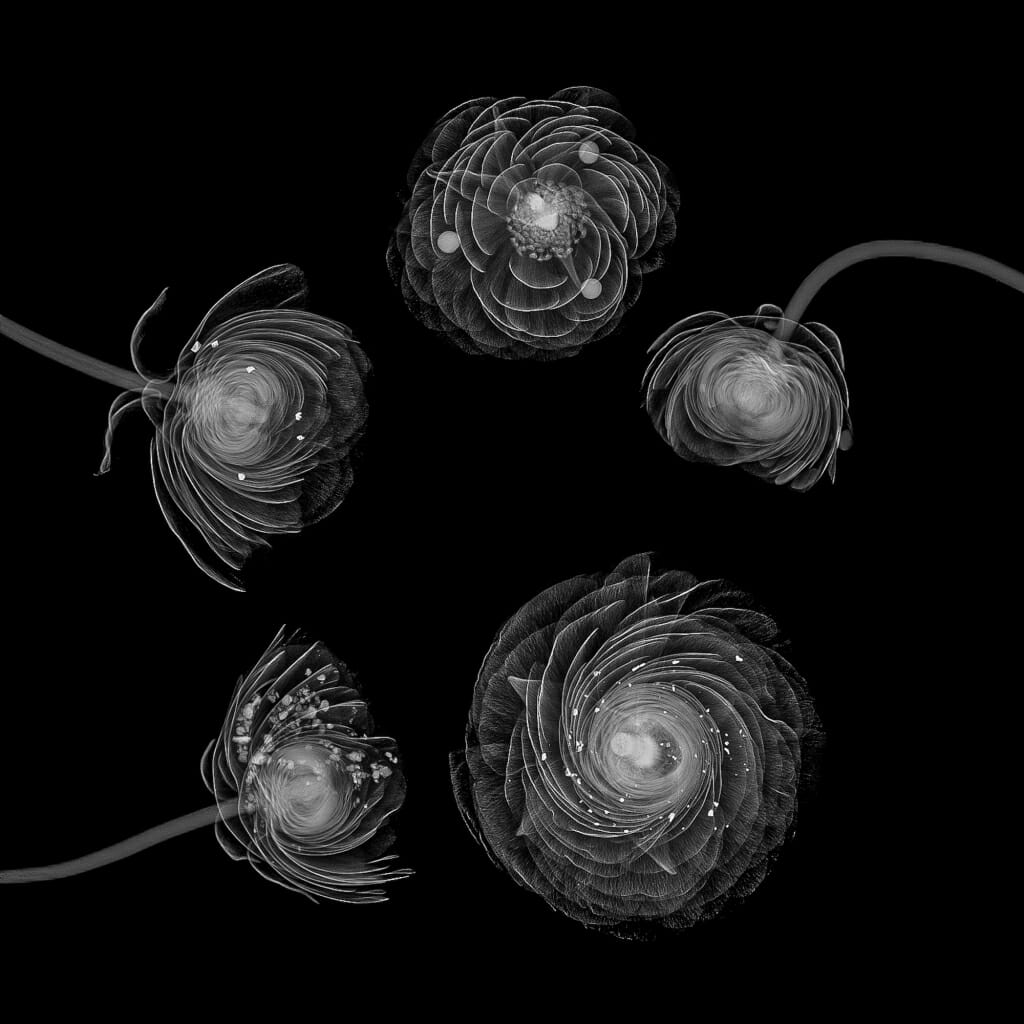 6 Flowers stand in for healthy breast tissue in this mammography image, while added calcifications — Can you spot them all? — represent the sort features doctors look for in X-ray images in an effort to catch breast cancer in early, treatable stages. UW–Madison researchers are working to improve detection of patterns of tiny calcifications for faster, safer, more effective diagnosis. 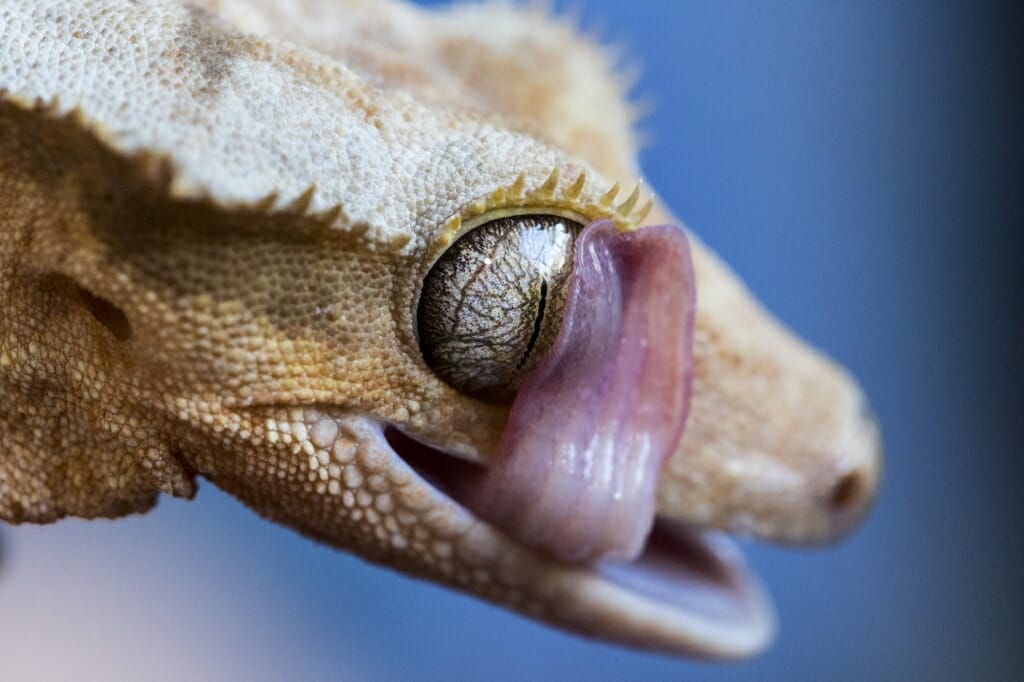 7 Crested geckos have clear, immovable eyelids, and a swipe of the tongue is the best way to keep them clean and moist. With veritable superpowers like the ability to see in the dark and climb vertical surfaces, geckos often serve as models for bio-inspired engineering. 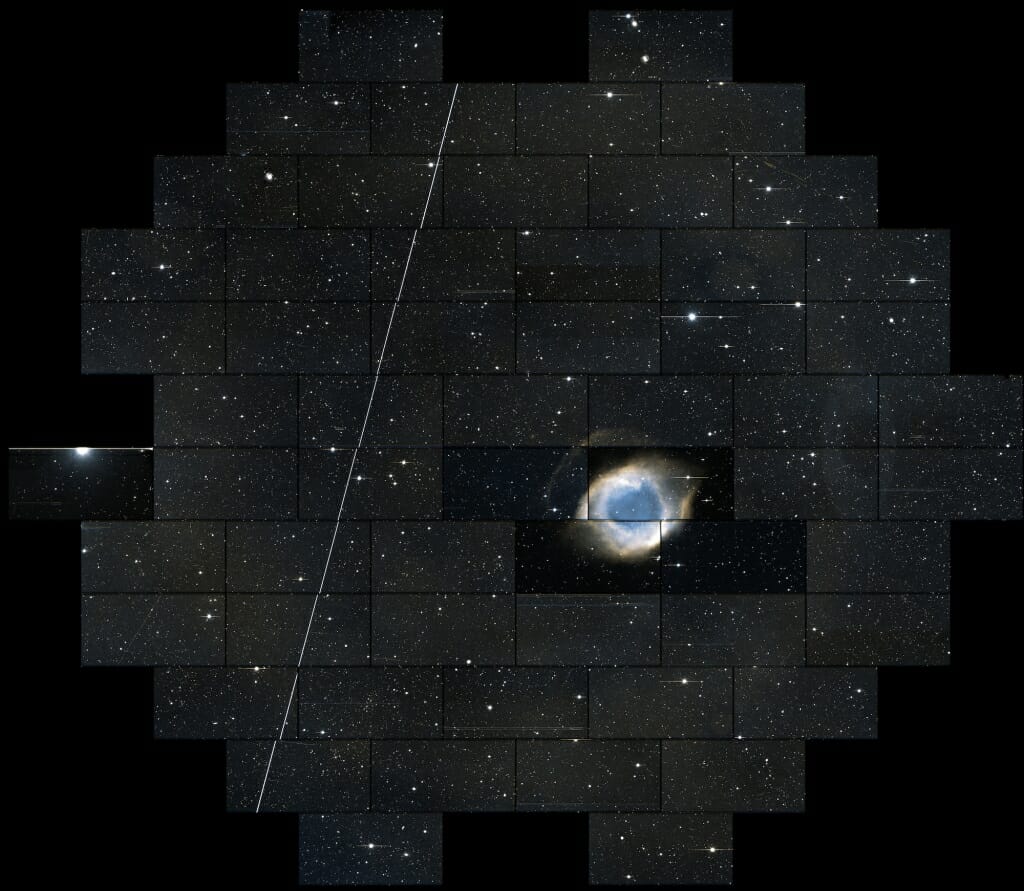 8 This snapshot of the sky contains thousands of distant galaxies, each containing billions of stars. The UW–Madison physicists who made it were looking for the flash of the explosion of a single star, the potential source of a sub-atomic particle called a neutrino, spotted zipping through the Earth by the IceCube Neutrino Observatory at the South Pole. The distant galaxies, swirling billions of light years away, are all the harder to see because of nearby objects, like the pictured Helix Nebula. 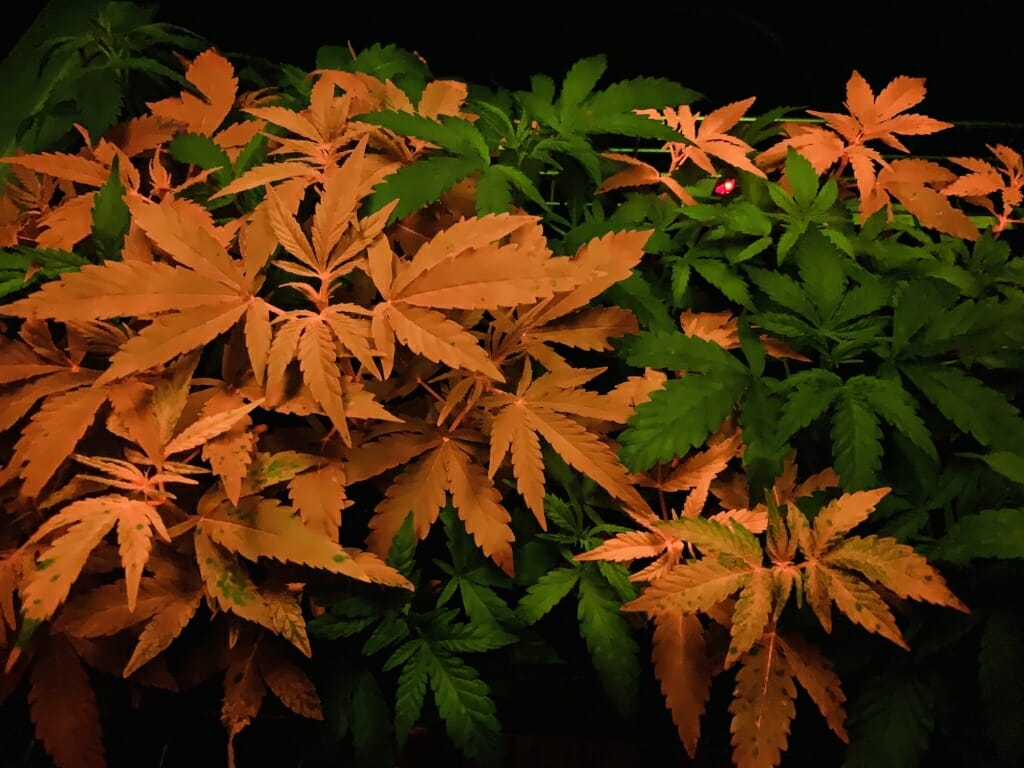 9 Thanks to a gene similar to one that makes some fish glow, leaves of the first transgenic — that is, augmented with genes from another species — hemp plants appear red when seen through a special filter, while leaves of an unaltered plant are a familiar green. Successfully engineering changes in hemp opens the door to alterations that could affect disease resistance, crop yield, fiber quality and cannabinoid compounds. It offers potential benefits for farmers, consumers and medical applications. 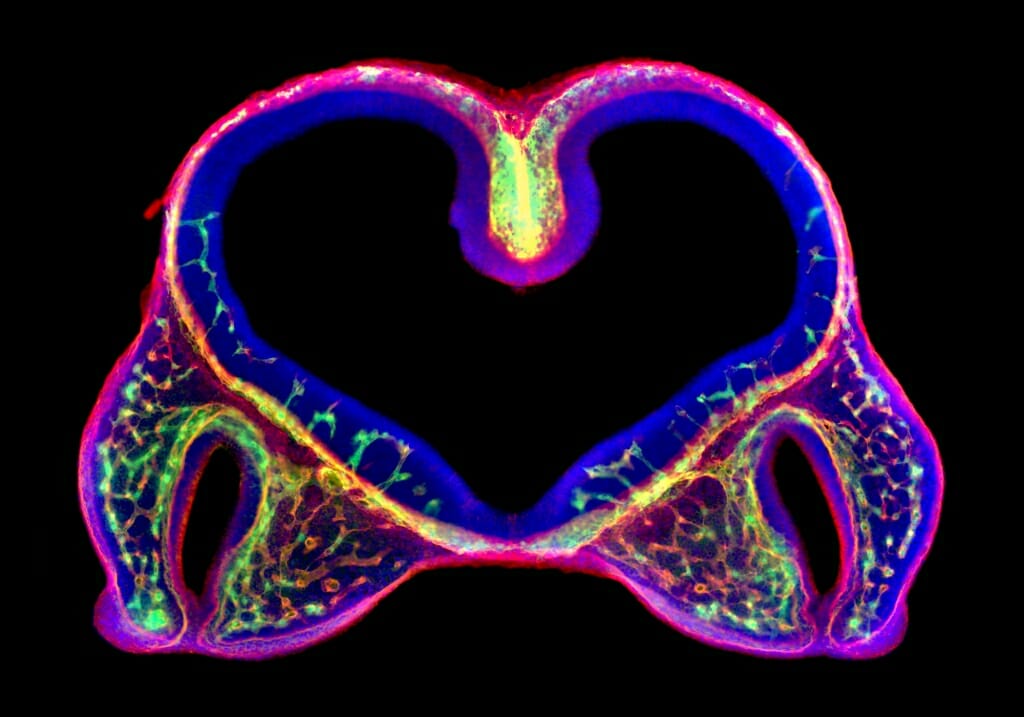 10 This section of the head of an 11-day-old mouse embryo was expertly prepared to highlight blood vessels — marked by the green and red of endothelial cells and laminin protein, respectively — in the developing brain (the heart-shaped structure at the center). The vessels are particularly dense at the lower end of the two black slits that will become nostrils, where tissue is fusing together to form the upper lip. If the tissue fails to fuse, the mouse will be left with a birth defect studied by the researchers in the lab that produced the image: a cleft lip. 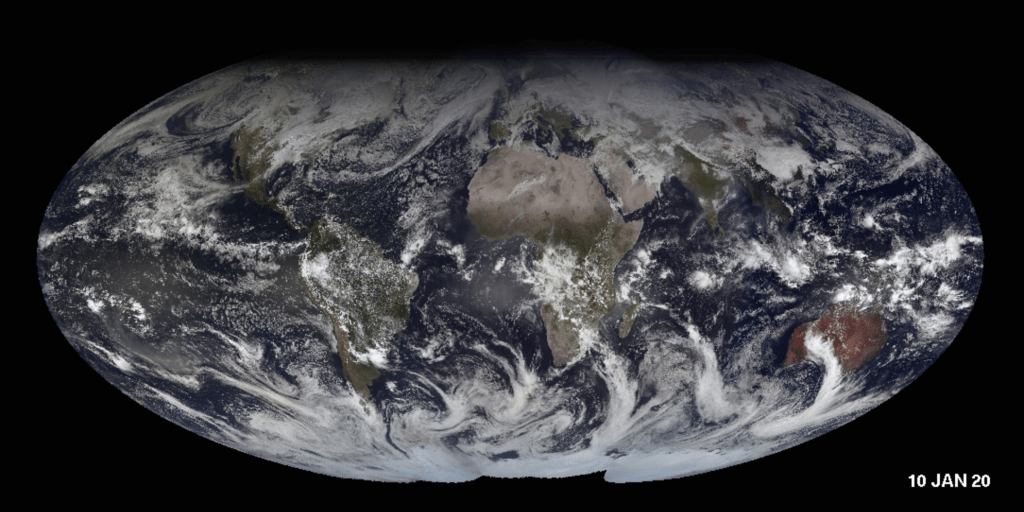 Combining more than 90,000 individual images taken by five satellites — two American, one Japanese and two from the European Space Agency — perched 22,000 miles above the Earth makes for an animated view of global weather patterns. Strong storms span many days, and seasonal shifts come and go as the sunlight over the poles waxes and wanes and the planet spins from March 2019 to March 2020. Click on image to launch animation.

Neural stem cells switch from a dormant to an active — very active, in many cases — state in this video from the lab of Neuroscience Professor Darcie Moore. The vigorous wigglers are starting a protein-maintenance program critical for efficient activation and differentiation into health brain cells.

“There was enthusiastic support right out of the gate, and that enthusiasm has grown year after year,” says Devitt, once editor of The Why Files and the recently retired director of research communications at UW–Madison. “Sharing science through imagery is another way to show how science works, and what you can learn from getting a close-up view of nature. And we all love to see something new and amazing.”

The contest winners — along with a slideshow of all entries — are typically displayed each fall in the McPherson Eye Research Institute’s Mandelbaum & Albert Family Vision Gallery on the ninth floor of the Wisconsin Institutes for Medical Research, 1111 Highland Ave. An exhibit will be scheduled and announced as activity on campus allows.

The 2020 winners show off the breadth of research and technical and scientific expertise at UW–Madison. The images were captured by experts in their scientific fields, trainees, students and curious amateurs, using flying drones, smartphones, cutting-edge electron microscopes and Earth-facing satellites orbiting tens of thousands of miles away.

Their subjects are both everyday and ephemeral, large enough to encompass billions of stars, and more minuscule than an ant.

The Cool Science Image Contest helps recognize the technical and creative skills required to capture images or video that document science or nature, and benefits from sponsorship by Madison’s Promega Corp., with additional support from DoIT Digital Publishing and Printing Services and the UW–Madison Division of the Arts.

Winning entries are shared widely on UW–Madison websites and in public exhibitions, and all entries are showcased in a slide show at the Wisconsin Science Festival.