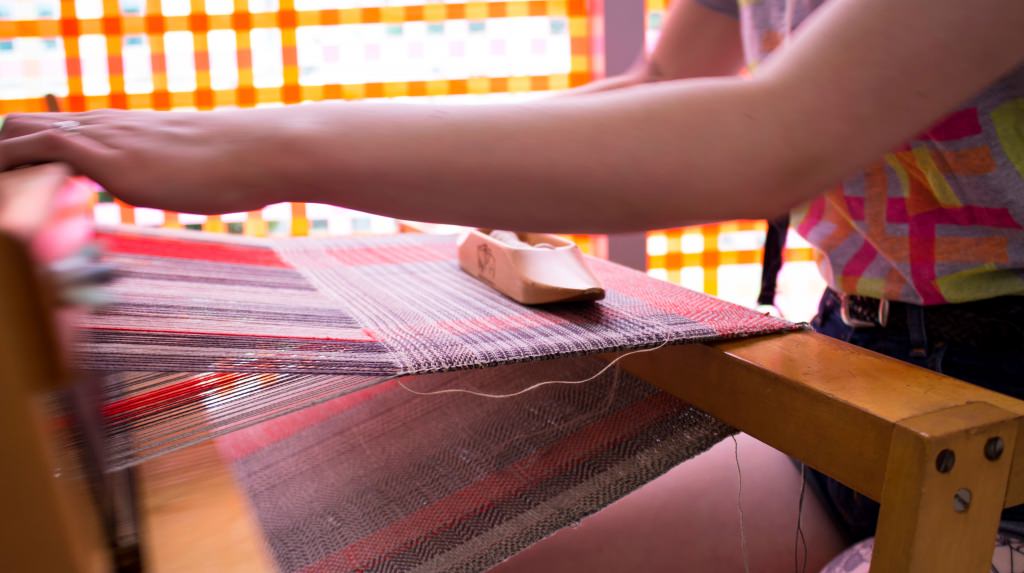 The Weaving Lab is located in the northwest corner of the Wisconsin Institutes for Discovery in the Image Lab, 330 N. Orchard St., room 1160. The project, which was started by Professor Marianne Fairbanks, is being hosted by WID’s Professor Lynda Barry. The Weaving Lab is open until Aug. 22. Emily Hamer

Much as they combine threads to create fabric, visitors to the Weaving Lab this summer have also entwined art and science.

Now in its second summer, the Weaving Lab: Plain Cloth Productions allows members of the community to weave on five floor looms for free in the Wisconsin Institutes for Discovery.

School of Human Ecology Assistant Professor Marianne Fairbanks, who started the project last summer, says participants have made mats, lab coats, towels and pillows out of the cloth that has been created. It’s fitting for the lab to be in the Discovery Building because the lab isn’t just about making fabric, it’s about artistic inquiry, she says.

Fairbanks wants the public to investigate questions about weaving, especially those in the realm of scientific discovery, such as the engineering of the loom or the process of weaving. 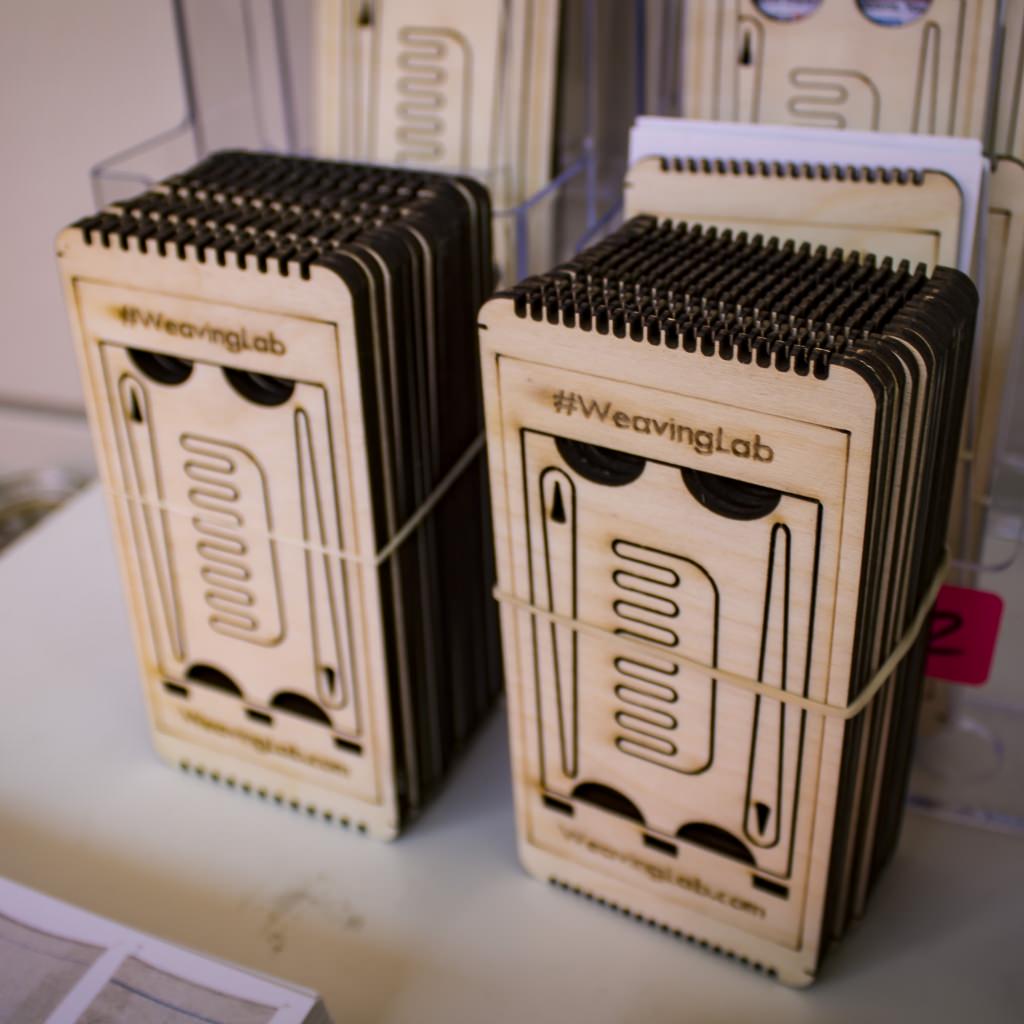 New this summer, are portable looms that visitors can take with them to weave at home. The loom is the size of an iPhone and invites weavers to offset the time they spend on their phone with material creation. Emily Hamer

Each of the five looms in the lab focuses on a different question about weaving. One asks the weaver to listen to a record while he or she weaves and explore how weaving relates to time and rhythm. Another loom encourages the weaver to consider how the weaving patterns connect to math. Weavers are also asked to consider whether weaving provides meditational value.

“I don’t have any conclusive answers for any of these questions, but they’re things that I want the people who come to the weaving lab to consider or think about. Usually it turns into a conversation about that,” Fairbanks said. “I do think that then the output — the things that we make together — somehow represents those questions.”

Recent graduate Erica Hess, who assists in the lab, said on average she sees around 10 people come in to weave per day. Fairbanks said she enjoys hearing the perspectives of a wide variety of community members, from scientists to kids.

Asuka Suzuki, a 12-year-old from the Madison area, said coming to the weaving lab is one of his favorite hobbies. Suzuki has biked to the lab to weave almost every day this summer.

“It’s quite fun to come here and try out the looms and experiment with the different weaving techniques,” Suzuki says.

Cloth is something we use every day, but we often take it for granted, Suzuki says.

UW-Madison materials scientist Gabriel Méric de Bellefon agrees. He became interested in the Weaving Lab because fabric and textiles are all around us, but he didn’t know how weaving actually worked.

“You start from this thread, then putting them together with this machine, it becomes very strong and also beautiful,” Méric de Bellefon says.

Many weavers find the process meditative.

Suzuki found it relaxing to see the cloth being formed, getting bigger and bigger as he kept weaving. When weaving with an album, Suzuki said he found a rhythm, weaving to the beat. Overall, he found it relaxing.

For Méric de Bellefon, weaving became a very automatic motion, with a single focus. Recent fine arts graduate Kat Bunke, who assists in the lab, says when she weaves, her mind gets “lost in a different headspace.”

Fairbanks hopes there will be research on the mental benefits of weaving some day.

For both metal and fabric you start with something weak — like simple atoms or thread — and when you arrange then in a certain way it becomes very strong, Méric de Bellefon said. 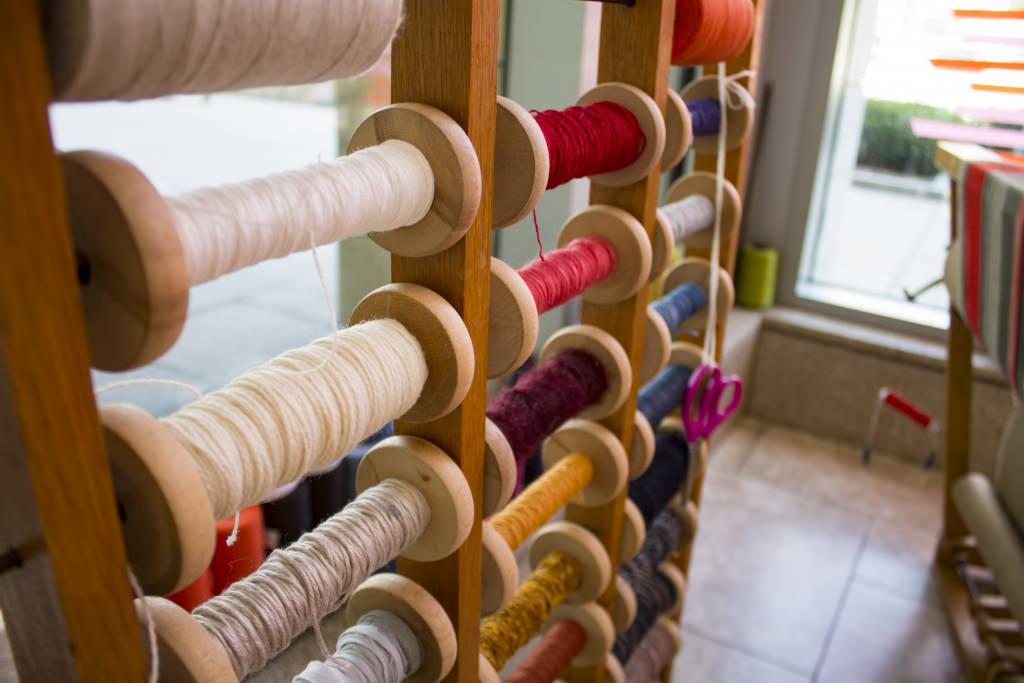 All of the fabric in the weaving lab starts as simple yarns and threads. UW materials scientist Gabriel Méric de Bellefon says the weaving together of threads to create a strong fabric reminds him of the arrangements of atoms that create steel, which he observes under a microscope. Emily Hamer

To allow weavers to continue exploring weaving at home, Fairbanks used a laser cutter to create portable looms about the size of an iPhone that people can take with them. In addition to making the loom portable, Fairbanks said she also thought it was interesting to juxtapose technology with weaving.

“It comes back to this wanting to get us out of the digital realm and back into the material realm,” Fairbanks said.

The pocket-sized looms also have a stand so people can display their fabric when they’re done. This serves as another form of community engagement, as Fairbanks hopes people will post their weaving creations online and tag the #weavinglab.

While the final products of weaving are exciting, Fairbanks said at the Weaving Lab, it’s more about the process.

“Really it’s the act itself,” Fairbanks said. “I’d say with all of these looms they’re set up not so much about the final product as much as they are about the process of getting people to experience weaving with us.”