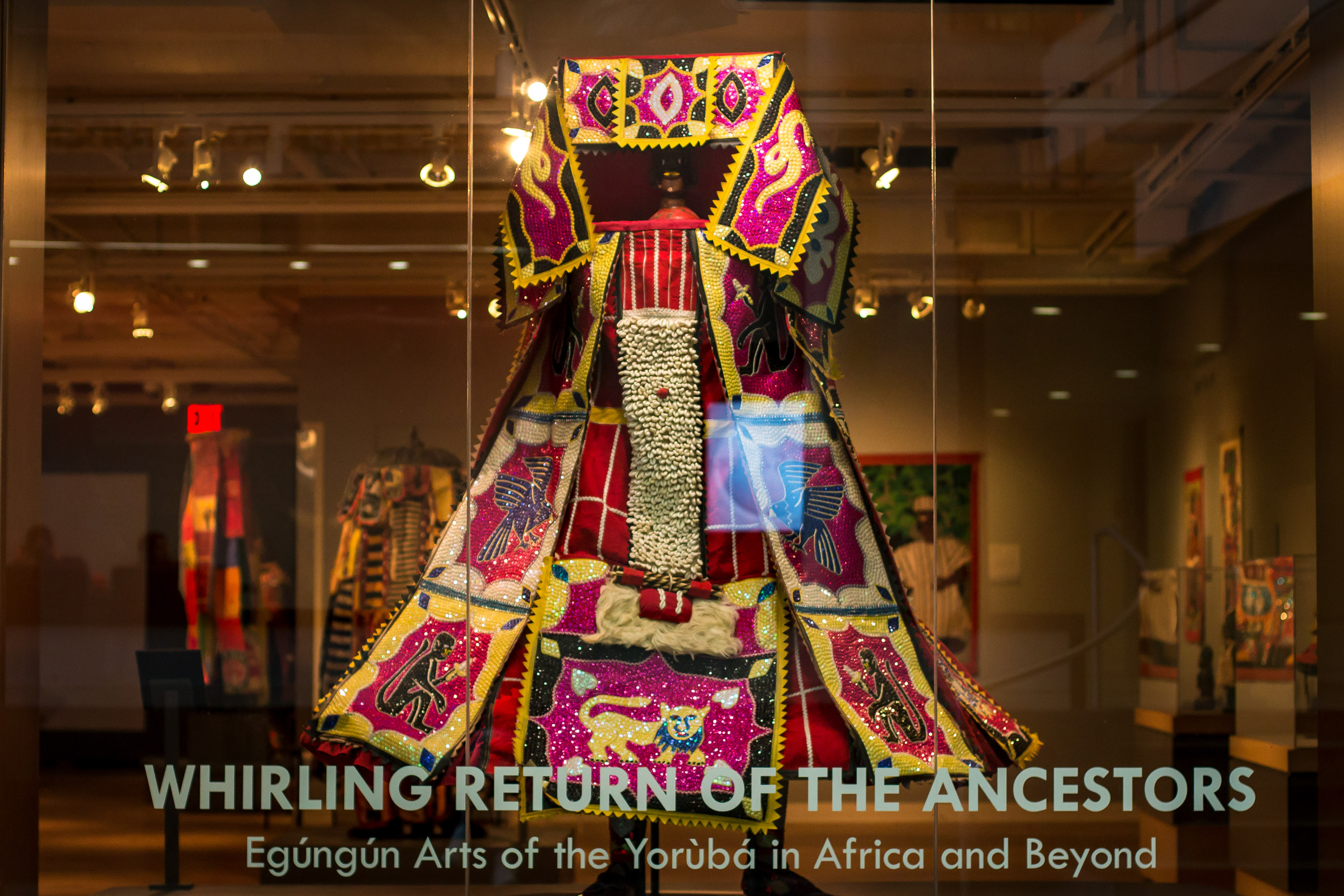 Students, staff and faculty collaborated across departments to create the “Whirling Return of the Ancestors” exhibit, which highlights one tradition of honoring the departed among Yorùbá people in Western Africa and the diaspora. Emily Hamer

As you enter the Ruth Davis Design Gallery in the School of Human Ecology, a lively beat of drums and singing hums in the background.

A deep pink costume adorned with shiny beads and sequins stands tall in the front window, its many layers nearly reaching the ceiling. The piece slowly spins in circles, bringing to life the spinning dances of Egúngún masquerades, which are celebrations of the ancestors among Yorùbá peoples of West Africa.

Toward the back of the gallery, a video of Egúngún festivals in Nigeria and South Carolina plays. The costumed dancers whirl around in circles and interact with audience members. The audience never sees the dancers inside because the performers “become the ancestors they’re dancing to celebrate,” says David Newell, director of exhibitions and outreach at the Ruth Davis Design Gallery.

“The costumes have these hanging panels that flare out like propeller blades and they also create a breeze,” Newell says. “It’s referred to as the breeze of blessing. Basically it is your ancestors are reaching out to you and that is the essence of them touching you, is the breeze that’s created by these costumes spinning around.”

The exhibit, aptly called the “Whirling Return of the Ancestors” is from Jan. 24 to April 8 in the Ruth Davis Design Gallery in Nancy Nicholas Hall. With costumes, videos, sounds, photos, statues and text stories, the exhibit highlights Egúngún arts and the traditions of Yorùbá people in a multi-sensorial experience.

Evjue-Bascom Professor Henry Drewal from the departments of art history and Afro-American studies departments, proposed the exhibition to the gallery last year, and worked with 16 students to prepare the gallery last fall in the Art History Curatorial Exhibition Practice class. 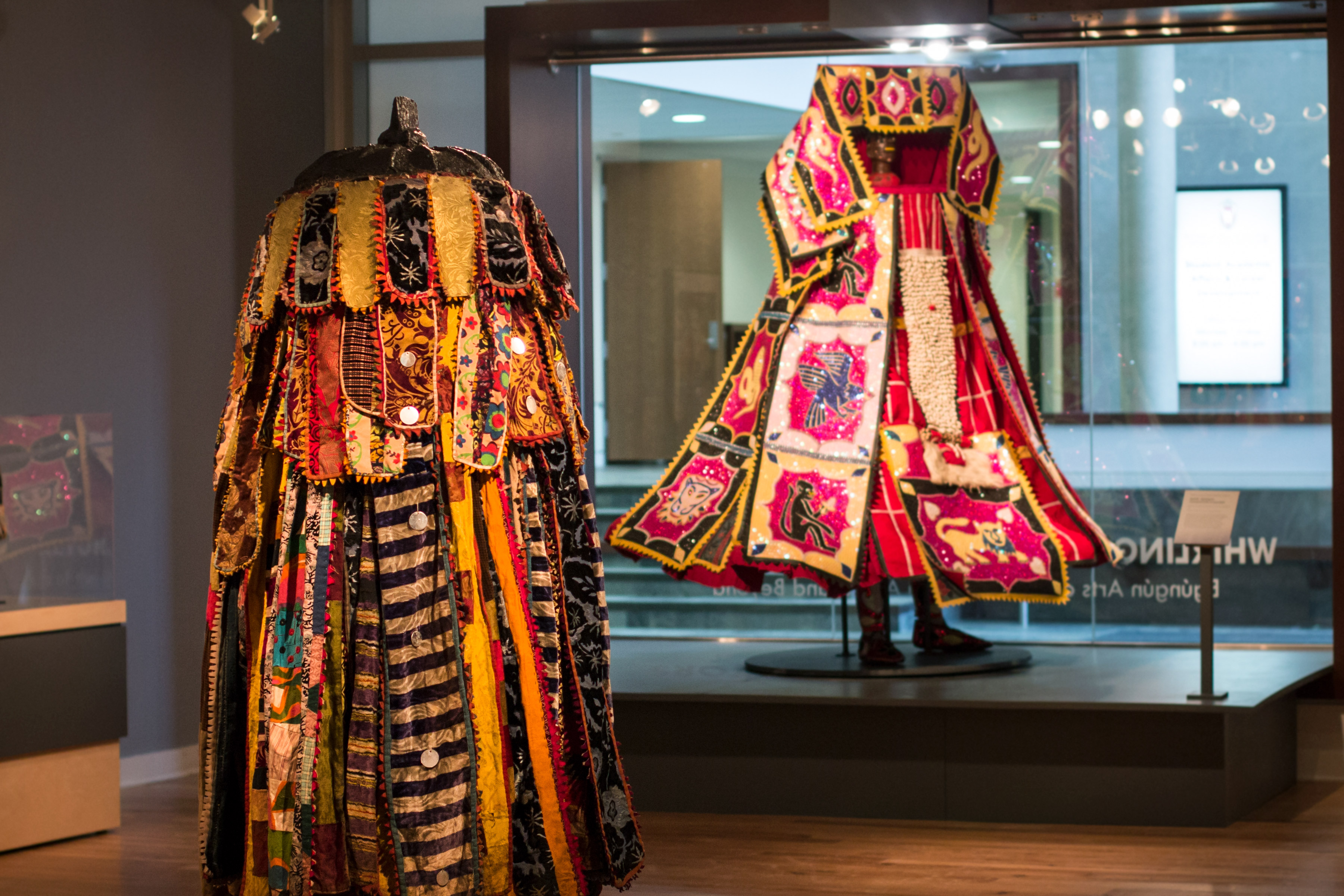 Egúngún costumes can weigh more than 60 pounds. The costumes are constructed as a hat, so that weight rests on the heads and shoulders of the performer. Emily Hamer

In the class, students had just 15 weeks to create the exhibition, whereas some museum exhibitions take 2-5 years of planning, Newell says. Students decided the floor plan, layout, lighting, colors, storyline, flow of the gallery and placement of objects. Each student also did a 10-page research paper on one of the items in the exhibit, then had to distill their research down into 50-75 words for the object label in the exhibit.

In addition to the exhibit itself, there are also a number of public events to dig deeper into Yorùbá traditions and how other cultures connect to them. Events coordinator for the African Studies Program Will Porter, who is also a doctoral student at UW, says one of the upcoming events “Death, Culture & Coffee” is going to ask people to consider how we honor our ancestors in our own communities. 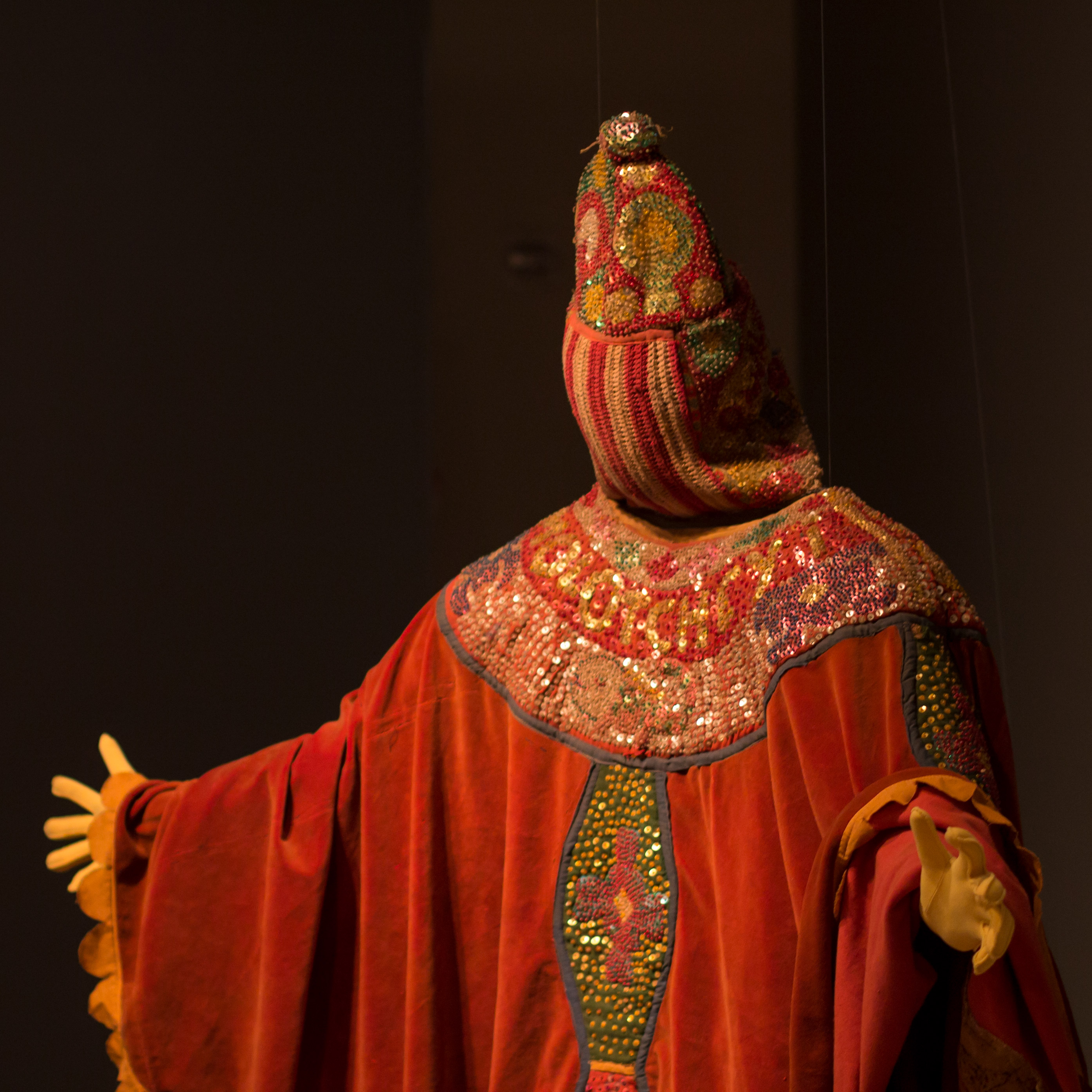 During performances the dancers spin their large circular cloths around and around in circles, fanning them out like a pizza dough. Emily Hamer

This upcoming April there will also be a two–day symposium with presentations by many of Professor Drewal’s former PhD students that will end with a live performance of Egúngún masquerades from Oyotunji African Village, South Carolina and a dance party.

Drewal says he has worked on the arts of Egúngún for many years, and wanted to bring the arts and history of the Yorùbá people to campus. He says Americans often don’t understand the richness and diversity of arts that come out of Africa. Egúngún masquerades are similar to Mexico’s Day of the Dead celebrations in that they honor the departed (as seen in the animated film CoCo), yet most Americans have never heard of Egúngún.

And Yorùbá traditions expand beyond the shores of western Africa. Egúngún masquerades are celebrated in South Carolina, Cuba, Brazil, Trinidad and other places in the Caribbean. Part of the exhibit encourages viewers to honor and celebrate their own ancestors by inscribing their names on a communal, interactive Egúngún memorial. Emily Hamer

Drewal lived in Africa with Yorùbá people for more than eight years. He apprenticed under a Yorùbá artist and documented Yorùbá arts and festivals. For the Yorùbá people, just because someone is dead doesn’t mean that they’re gone. They’re just somewhere else — on a different plane — but they’re always with you, Drewal says.

Drewal, along with his former student Bloaji Campbell, commissioned an Egúngún costume from the Republic of Benin. Its first appearance is in this exhibition. Thinking about this Yorùbá tradition helps Drewal remember his own departed and how they have helped shape his life. He says they are with him whenever he thinks about them, just as for the Yorùbá people, they are never truly gone.

When they go to the exhibit, Drewal hopes viewers will do the same. He wants people to consider how they honor their dead and learn from this African example of the Yorùbá people. One interactive piece in the exhibit invites visitors to honor their departed by inscribing their names or writing a poem.

“That’s one of my hopes for this exhibition,” Drewal says. “That we come to understand different cultural practices as part of what unites us as humans.”

Three public events related to the exhibit are coming up March 1, March 7, and March 11. The symposium is April 6-7; and from April 5-8 there will be performances and workshops by a troupe of Egúngún masqueraders, singers, and drummers from Ọ̀yọ́tunji Village, South Carolina.