Symposium showcases gamut of student research, some of it already making lives better 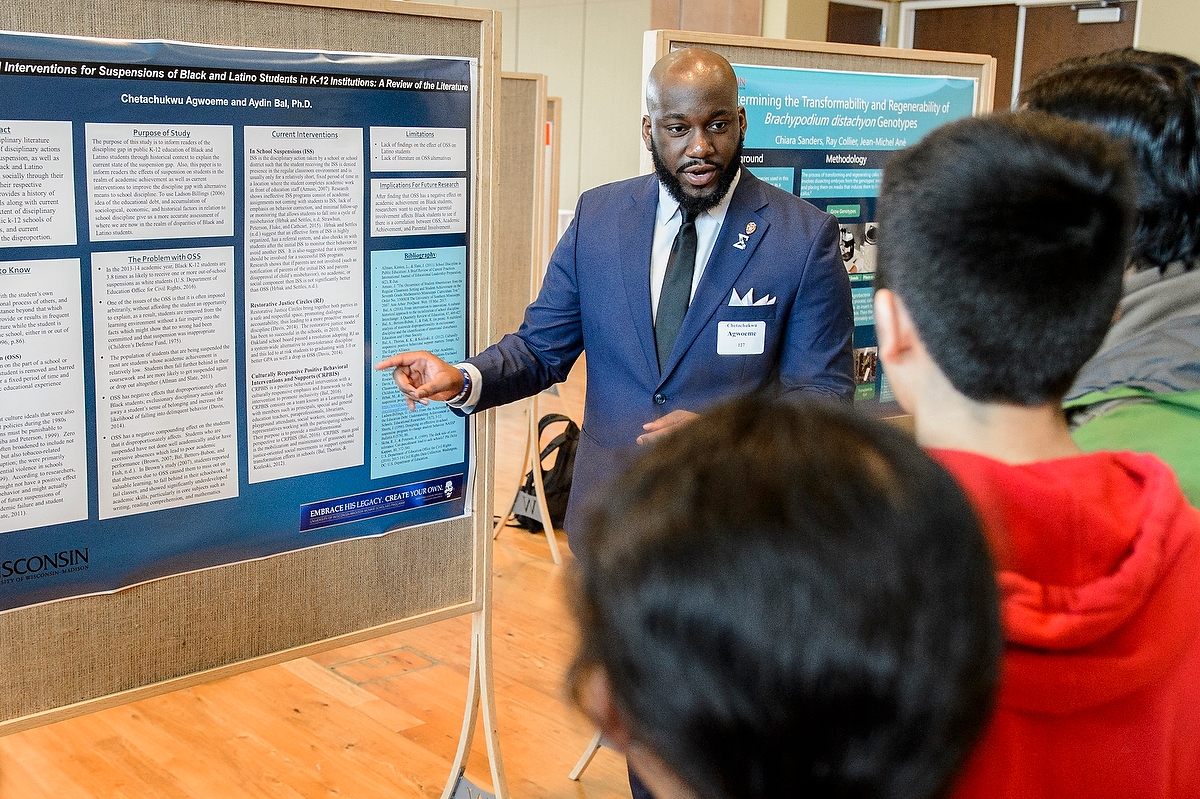 A few months ago, UW–Madison senior Sam Marquardt spent part of a day at Union South digging through the trash.

Last Thursday, Marquardt and classmates Rhianna Miles and Caroline Mitchell were back at Union South, this time to present their findings at the 2017 Undergraduate Symposium. The event, dubbed “a celebration of undergraduate research,” showcases talent from across the campus.

A record 683 students took part this 19th year, representing 496 projects. Of those, most were presented as either poster displays or talks.

The effort to study the waste stream at Union South illustrates how a lot of the research on display Thursday has immediate, real-world value, said Bret Shaw, an associate professor in the Department of Life Sciences Communication and the mentor for the project. The waste stream was contaminated to the point where something needed to be done, he said.

Students in his class studied the issue in multiple ways—in-person observations, a survey, one-on-one interviews, the trash audit.

“We learned that most people care about recycling and composting and want to do better, but they don’t always have the knowledge and know-how, so they get very confused,” Marquardt said.

In five bags of recycling, for instance, the students found more than 100 pieces of plastic silverware. The utensils are not recyclable.

After the students studied the problem as a class, they broke into teams to brainstorm solutions. The winning plan by Marquardt and his research partners includes a social media educational effort and stickers on items that explicitly say “recyclable” or “compostable.”

Union South management is reviewing all the student recommendations and plans to implement some of them, Shaw said.

The symposium “shows that we really are a research-focused university,” said Lindsey Waite, a junior from Arlington Heights, Illinois.

Her research on how calorie restriction affects voluntary movement of aging rhesus monkeys drew considerable interest from people filing past the 298 poster presentations. She found that monkeys placed on a long-term diet with calorie restrictions still become less active as they age, but at a much slower rate than other monkeys.

Senior Kylie Markeland of Madison and her research partners examined the impact of book formats on word learning by testing 146 preschoolers. Contrary to popular belief, the children learned more words from eBooks than print books.

“We can’t know the minds of preschoolers, but we hypothesized that kids get really excited about screens, so they may be more engaged and pay more attention,” said Markeland, who worked on the project with classmates Lexie Deignan, Mary Pulvermacher and Kaelyn Schreiner.

Eight freshmen in an Intro to Engineering class dove into helping a Madison woman with a severe form of cerebral palsy who needed a device to keep her engaged emotionally, intellectually and cognitively. The woman is in a wheelchair and has a complicated set of symptoms, said Mitchell Tyler, a senior lecturer in biomedical engineering and the course instructor. Tyler became aware of the woman through the organization United Cerebral Palsy of Greater Dane County.

“Once you have an actual person involved who needs what you’re doing for use in her daily life, it becomes so much more than just a class project with a deadline and a grade,” said student Daisy Garcia, of the Los Angeles area, who met the woman during the research phase.

The students showed off the completed device Thursday. Made of polycarbonate, it is about the size of a cereal box and attaches with suction cups to a tray on the woman’s wheelchair. It includes LED lights that change color, a speaker system, a screen and a fan. The audio plays the woman’s favorite songs (lots of Disney tunes), while the screen offers a slide show of images that please her (she’s partial to photos of cuddly animals and hunky men).

“This isn’t something that can be readily purchased on the market,” said student Siddhant Jain of Menomonee Falls, Wisconsin. “It was meant to be specifically for one person. But we will be making our plans available so that others can adapt the device to their own needs.”