Drosophila erecta is an African fruit fly with a big problem: The male sexual organ is so rough that sex acts, almost literally, as a two-edged sword — necessary for reproduction, but physically injurious.

Because evolution places reproduction as first among equals, females have developed overlapping solutions to their dilemma. First, as Amir Yassin, a scientist in the University of Wisconsin–Madison Laboratory of Genetics recently discovered, females have evolved protective armor plates in their reproductive tract. 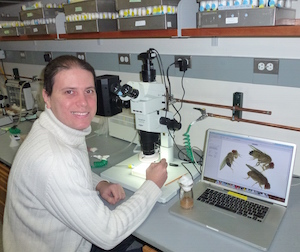 Amir Yassin was first author of a paper in Nature Communications that analyzed how evolution could simultaneously favor two different colors for females. John Pool

But “females still have an incentive to avoid excess mating attempts beyond what they need to reproduce,” observes John Pool, senior author of a paper published this week (Jan. 18, 2016) in the journal Nature Communications.

And that explains the second solution: a “cross-dressing” strategy that colors many females as dark as males, reducing the amount of injurious male attention.

However, Pool, an assistant professor in the laboratory, says the ruse only works if some females retain the distinctive lighter color. “By resembling males, the darker females are successful at hiding from males, but that only works if there are other, lighter females.”

Having established that optimum reproduction “demands” females of both colors, Pool and his colleagues homed in on a well-known pigment gene called “tan” that creates the color on the exoskeleton, as they focused on how the genetic controls could deal with such a contradictory need.

Some female Drosophila erecta fruit flies have a dark coloration that camouflages them as males, reducing the number of copulations and, therefore, the amount of injury. Michel Veuille

“We localized the trait difference to a particular sequence that regulates how much tan is turned on, and we concluded that both versions of this regulatory sequence have been in existence for several million years. This supports the idea that natural selection has kept this difference around because it has such strong survival value,” he explains.

Fruit flies became one of biology’s “model organisms” after a century of intensive research, and a study Pool published last week in the Proceedings of the National Academy of Sciences revealed another subtle aspect of their genetic regulation. 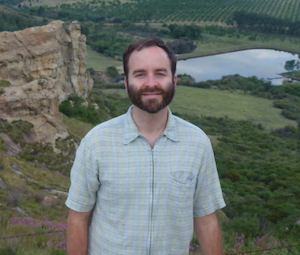 John Pool collects fruit flies in Ethiopia and other parts of Africa (such as here above a cherry farm in South Africa). Amanda Pool

Why, Pool wondered, was an evolutionary change in wing size and shape among flies that had migrated to a higher altitude accompanied by defects in wing structure? The cause, he says, seems to be a normal error-checking mechanism that was thrown off balance.

“An organism’s development can be buffered against disturbances due to environmental challenge or mutation,” Pool says, “and so natural systems often have some amount of robustness. They can get where they are going, even if they hit some bumps in the road.”

In a study of fruit flies that migrated to Ethiopian highlands about a thousand years ago, Pool found that their wings were enlarged — as expected to suit the rarefied air — but they also contained far more flaws. 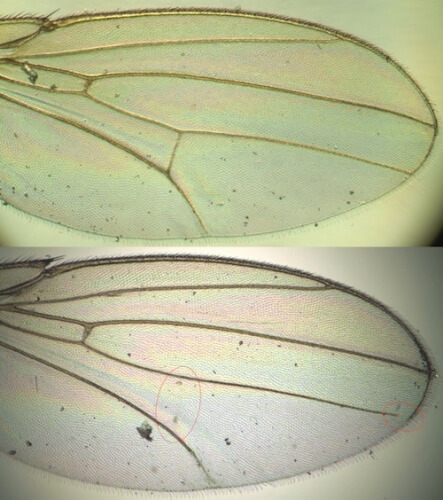 “Somehow, this apparently beneficial change — wing enlargement — was accompanied by what we might think of as a loosening of error checking,” Pool says.

Although the mechanism of error checking (or error prevention) is not clear at the moment, Pool compares it to bumpers on a bowling alley.

“They make sure the ball gets to where it is going, even if you don’t throw it well or there is some junk in the lane. Apparently after the genetic changes occurred to enlarge the wing, this error checking has not yet been restored. Growing larger wings may have helped these highland flies, but instability came along as a side effect. We are fascinated to see if this proves to be a general pattern in nature.”