Hypertrophic cardiomyopathy is the most common inherited heart disease, marked by an abnormally thickened heart muscle that can obstruct blood flow and lead to sudden death in young adults.

A dizzying array of over 1,400 genetic mutations can lead to the disease, puzzling doctors on how to treat so many unique varieties. But in new research, University of Wisconsin–Madison scientists discovered that many different genetic mutations result in surprisingly similar changes to heart muscle proteins in patients with the most severe manifestations of hypertrophic cardiomyopathy. This shared protein fingerprint suggests that shared treatments could treat the disease.

“This could be good news for doctors treating obstructive hypertrophic cardiomyopathy patients, because our data suggest there’s a convergent pathway in these patients, allowing development of treatments that generally target patients with severe obstruction from their cardiomyopathy instead of targeting a patient’s individual genetic mutations,” says Ying Ge, a professor of cell and regenerative biology and chemistry at UW–Madison who headed the new study. 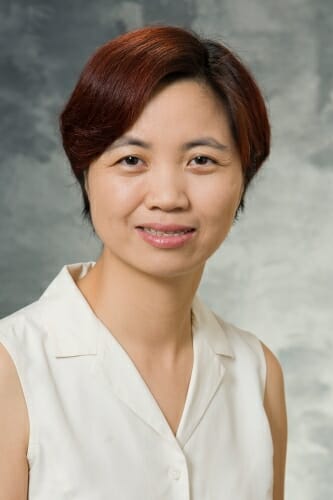 Ge and an international collaboration of researchers published their findings the week of Sept. 21 in the Proceedings of the National Academy of Sciences. UW–Madison graduate students Trisha Tucholski and Wenxuan Cai led the work, which analyzed in detail the protein signatures of diseased and normal hearts using advanced protein-measurement technology.

The team collected samples of diseased heart tissue from 16 patients who underwent corrective surgery to fix impaired blood flow in their hearts. Hypertrophic cardiomyopathy in eight of these patients was due to eight distinct mutations across two genes; for the other eight patients, the disease-causing mutations were unknown. Proteins from the diseased heart samples were compared to those from healthy donor hearts.

Despite the variation in underlying genetic mutations, Ge’s team discovered a general pattern in hearts from patients with the disease. For example, many key muscle proteins from diseased hearts had fewer molecular tags known as phosphates. While the exact consequence of having fewer phosphates is unknown, it’s likely that these altered proteins contribute to a general state of dysregulation in the heart, leading to the thickened muscle characteristic of the disease.

The findings reinforce that genetic mutations aren’t always enough to explain diseases, says Ge. The proteins those genes encode have the ultimate impact on health, and the body’s proteins can be altered in subtle but consequential ways during disease.

“When we first performed these experiments, this similarity at the protein level was quite surprising to us because it is generally expected that different mutations could lead to different changes in the proteins,” says Ge. “But in reality, these results make sense, because when the patients with this disease present to the hospital for surgery, their hearts exhibit similar dysfunction.”

The results are still preliminary. Ge’s group wants to expand to study hundreds of additional patients with a wide array of underlying hypertrophic cardiomyopathy mutations to see if the similar protein fingerprint trend holds. They also plan to study heart stem cells with disease-causing mutations in an effort to study early stages of the disease, which isn’t possible with human patients.

But with additional research, this kind of in-depth analysis of protein fingerprints could guide future treatments.

“This data opens the door with evidence showing that protein-level changes might be a better reflection of the patient’s disease than their genes, and if we can examine patients’ samples at the protein level, that could help us provide precision-medicine treatments,” says Ge.