Claire Evensen, the daughter of a physician and an engineering physics professor, says she sometimes feels like her college major was predestined.

“From a young age, my parents instilled in me this attitude that science is cool,” she says.

As an undergraduate at UW–Madison, Evensen has excelled in biochemistry and mathematics, winning numerous honors for her academic work and original research. Her latest award is the most prestigious yet: a Marshall Scholarship. 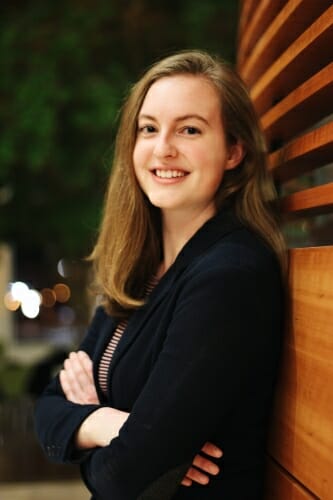 Established in 1953, the Marshall Scholarship Program gives high achieving young Americans the opportunity to study at the graduate level at any university in the United Kingdom. The program was created to honor the ideals of the Marshall Plan and to foster appreciation of the U.K. among future American leaders. Up to 50 scholarships are awarded each year; there are 46 winners in the 2020 class of Marshall Scholars.

Evensen, of Verona, Wisconsin, will graduate this spring with a bachelor’s degree in biochemistry and mathematics, with comprehensive honors (honors in biochemistry and in the liberal arts). Next fall, she plans to begin a master’s degree program in mathematical modeling and scientific computing at the University of Oxford in Oxford, England.

As a child, Evensen read Cook’s Illustrated magazine — as much for the food science embedded in the recipes as for the culinary results. Starting in 6th grade, she became a Science Olympiad participant. She and her friends described the competitions approvingly to people as “nerdy track and field.” Evensen’s mother is a family practice physician in the Madison area; her father is an engineering physics professor at UW–Platteville.

At UW–Madison, Evensen has for three years researched the biophysics of transcription initiation with John D. Ferry Professor of Biochemistry Thomas Record. She has earned several campus research grants to support her work, including a Hilldale Undergraduate Research Fellowship, the university’s top research grant. She has presented her research at national conferences and earned second authorship on a paper published in the journal Biochemistry.

As president of the UW–Madison student chapter of the American Society for Biochemistry and Molecular Biology, Evensen has organized a regional conference so her fellow members can benefit from the opportunities she has had in networking and research presentation. She secured regional meeting status from the national organization, raised funds for a $10,000 budget, and recruited a student planning team. This coming March, roughly 200 undergraduates from throughout the Midwest are expected to attend the “Molecules in the Midwest” conference at UW–Madison.

Evensen is both a Goldwater Scholar and an Astronaut Scholar — national awards that support the next generation of scientists, explorers and innovators. Just last month, she was a finalist for a Rhodes Scholarship.

Upon winning the Goldwater Scholarship, Evensen said she was drawn to UW–Madison in part because of the research taking place in the Department of Biochemistry.

“I like how broad the field can be,” she says. “You can walk around the buildings here and see students’ posters that focus on so many different areas and applications of biochemistry. There are so many potential paths, which is exciting.”

This past summer, Evensen worked with Professor Philip Maini at the Wolfson Centre for Mathematical Biology at the University of Oxford. The opportunity came about through UW–Madison’s Summer Cambridge and Oxford Research Experience (SCORE) program.

“That was a big one for me as far as my development as a researcher,” Evensen says. “UW–Madison excels at funding for summer research programs, which is really important. It allowed me to get paid to do research full time instead of needing to find a summer job.”

Beyond a rigorous curriculum and research load, Evensen participates in Assistant Professor Alicia Lee’s clarinet studio and in the audition-only Madison Wind Ensemble. She also is a volunteer tutor with Greater University Tutoring Service.

In her future academic career, Evensen says she wants to use math models to understand such things as how viruses evolve, how the body heals, how tumors spread and how neural degeneration progresses.

“Claire exemplifies the Marshall Scholarship criteria of academic merit, leadership, and ambassadorial potential,” says Julie Stubbs, director of undergraduate academic awards at UW–Madison. “She’s engaged in research at a level seldom achieved among undergraduates, and has made the most of every opportunity available to her. Through K-12 science outreach and the Molecules in the Midwest conference, she’s also created opportunities for others to flourish.

“Claire will be a terrific ambassador for UW–Madison, and the United States, while at the University of Oxford.”