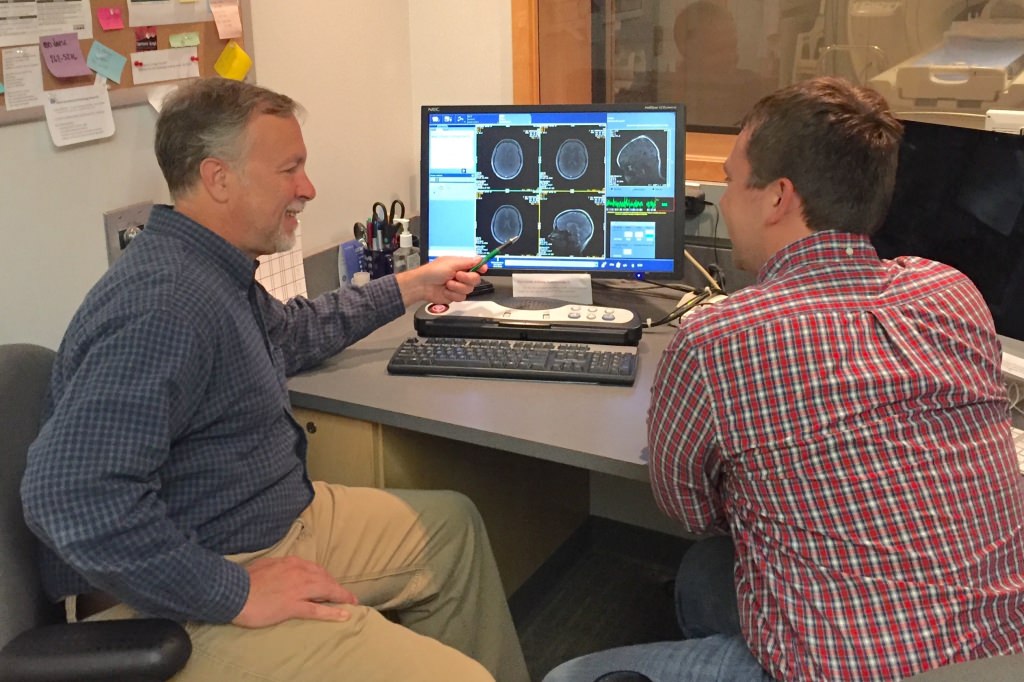 Much like electricity traveling down wires, nerve impulses in our brain travel along nerve fibers. And just as wires need insulation to function well, nerve fibers, too, rely on a kind of insulation called myelin, a fatty substance that protects them and increases the speed at which nerve impulses travel.

At birth, the human brain contains very little myelin but it increases quickly throughout childhood. Many researchers think our ability to learn quickly and process large amounts of information as children is directly related to the rapid myelination of our nerve fibers, yet scientists don’t fully understand this process.

A recent study led by Doug Dean III of the Waisman Center at the University of Wisconsin–Madison and published in the journal NeuroImage combined two related but different imaging techniques to non-invasively track the rate at which nerve fibers in children’s brains become wrapped in myelin.

“Having a non-invasive way to quantitatively map the thickness of myelin sheaths around nerve fibers will help us learn more about how the brain develops and when new nerve connections are made,” says Dean.

It could also lead to new findings about diseases like multiple sclerosis and leukodystrophies, in which the myelin sheath is damaged.

Additionally, Dean says, there are several neurodevelopmental disorders with no known causes and “understanding how myelination proceeds in typically developing brains could tell us if these disorders are linked to defects in myelination.”

In general, the thicker the myelin sheath, the quicker the speed of nerve impulses along that nerve fiber. To non-invasively measure the thickness of the myelin sheaths, Dean and his colleagues enhanced and combined two existing techniques that are variations of magnetic resonance imaging, or MRI.

MRI has a wide range of medical applications and is often used to image the brain, other organs, and joints and soft tissue. MRI is also the basis of several imaging techniques.

One of the MRI-based techniques used by Dean, called DTI, provides highly detailed images of nerve fibers and other structures in the brain. But these images aren’t very helpful for researchers who are trying to determine the thickness of myelin fibers.

Another MRI-based imaging technique, called mcDESPOT, can help researchers estimate how much myelin there is in specific areas of the brain but doesn’t provide a clear picture of other structures that may also be present in those areas.

While it could be years before this technology yields new diagnostic or therapeutic approaches, Dean says the study is an important first step toward understanding a vital stage of early human development.

While each imaging technique provides valuable information, by themselves they paint only a hazy portrait of myelin thickness. By combining these two methods, Dean and his study colleagues were able to not only image nerve fibers and other structures in the brain, they could also calculate the size of these nerve fibers and the amount of myelin surrounding them.

For the study, the researchers captured brain images from several children, ranging in age from around 4 months to more than 7 years, and used the combined techniques to calculate myelin thickness. These measures closely matched what other researchers had predicted using theoretical models.

“That shows the accuracy of our imaging techniques and calculations,” says Dean, though he notes that while the initial results are “very encouraging,” additional studies using animal models or preserved human brains are necessary to further test their findings.

While it could be years before this technology yields new diagnostic or therapeutic approaches, Dean says the study is an important first step toward understanding a vital stage of early human development.

Other authors of the study include Brittany Travers, Nagesh Adluru and Andrew Alexander at UW–Madison; Holly Dirks and Sean Deoni at Brown University; and Jonathan O’Muircheartaigh at King’s College in London.