Research may point to new ways to deliver drugs into bacteria

An exhaustive look at how bacteria hold their ground and avoid getting pushed around by their environment shows how dozens of genes aid the essential job of protecting cells from popping when tensions run high.

For centuries, biologists have considered cells the irreducible unit of life, and cells require various types of envelopes to contain the chemical conditions life demands. When cells lose their mechanical properties, they rupture and die, and many antibiotics attack the envelope in order to mechanically destabilize bacterial cells.

But until now, it was unclear which genes (and the proteins they create) play a role in making the bacterial envelope rigid. 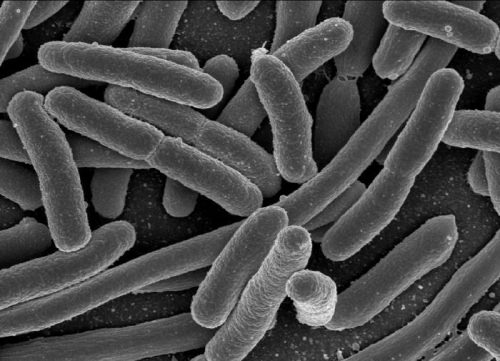 E. coli, a rod-shaped bacterium common in the digestive tract, as seen in a scanning electron micrograph. Image courtesy of National Institute of Allergy and Infectious Diseases (NIAID)

Today (June 16, 2016), in a study published in Cell Systems, Douglas Weibel, a professor of biochemistry at the University of Wisconsin–Madison, and colleagues report how deleting, or “knocking out,” each one of approximately 4,000 genes in the bacteria Escherichia coli affects the stiffness and integrity of its envelope.

The results were surprising due to the breadth of the different proteins found to be involved, Weibel says. Previously, only one gene had been known to play a role in cell mechanics in E. coli, a rod-shaped bacterium common in the digestive tract. Their automated system for measuring stiffness identified several dozen genes — each making a unique protein — that significantly affected stiffness when deleted.

The bacterial cell envelope is composed of the cell wall and membranes and is the cell’s major mechanical stabilizer. One gene with the biggest impact makes a protein that builds the cell wall, “which makes sense,” Weibel says.

However, Weibel says the group also found genes “associated with virtually every possible function in the cell.” For example, a hook-shaped protein helps connect the flagellum (the bacterium’s “propeller”) to the motor that turns it. “When the gene is deleted, the cell becomes softer. Maybe the envelope now has empty holes.”

The explanation for roles of the other proteins is murky at best, Weibel says. 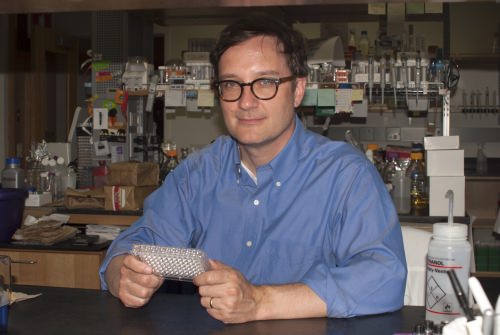 Douglas Weibel, professor of biochemistry, in his lab at UW–Madison. Photo: Laura Vanderploeg

The core of the experiment was a system that required bacteria to grow in a gel, forcing them to push against their environment. The authors wanted to create a gauge to measure stiffness that could be applied to thousands of different bacteria, each lacking one specific gene and its corresponding protein. If a cell is weakened by the loss of a key protein, it will have a harder time pushing the gel out of the way.

In these cases, the result was slower cell growth, and a smaller number of cells when counted by an automated instrument. To ensure that the decreased growth was related to envelope stiffness rather than another cause, the researchers compared samples with the same mutations growing in liquid rather than gel.

The results expand our understanding of the structure of bacterial cells, Weibel says. “Studies of cell mechanics often start with candidate proteins already thought to be related to cell stability, but cells are wired together in non-obvious ways. Most of the cell mechanics known are from red blood cells and mammalian cells. Not many people got jazzed up thinking about how bacteria do it.”

Better understanding of the bacterial envelope could help in several ways, Weibel says. It can pinpoint mechanisms that known antibiotics use to wreck mechanical stabilizers, including the bacterial envelope. It could identify new drug targets to explore, perhaps by finding combinations of proteins that can be attacked simultaneously.

“Most of the cell mechanics known are from red blood cells and mammalian cells. Not many people got jazzed up thinking about how bacteria do it.”

And because an intact envelope protects bacteria from the entry of drugs that would wreak havoc from the inside, the research may point to new ways to deliver drugs into bacteria. That’s especially important for the troublesome Gram-negative bacteria, like Acinetobacter baumannii, Pseudomonas aeruginosa, and Klebsiella pneumoniae, which are protected by two membranes. “Developing antibiotics against Gram-negatives is challenging because that’s where we have the hardest time transporting drugs into cells,” Weibel says.

Underlying the new study is an upsurge in ultra-fast biological tools. “Until five or 10 years ago, we were never able to do this,” says Weibel. “The genetics, making a collection with every single gene knocked out, and then doing individual mechanical measurements on thousands of different mutants, would have been insane.”

Work that took two years a few years ago can be accomplished in a day, he says.

Still to come, Weibel says, is the hard part. “For a few of these proteins, you can start building explanations for why they work. But for a lot of others, we don’t know where to start looking for an explanation.”

The research was supported by National Institutes of Health Director’s New Innovator Awards DP2OD006466 and DP2OD008735.