Through poetry, Hajjar Baban has found her voice and her calling.

Her chosen field, she says, allows her to “be honest about my understanding of the world while changing and imagining new ways of being.” 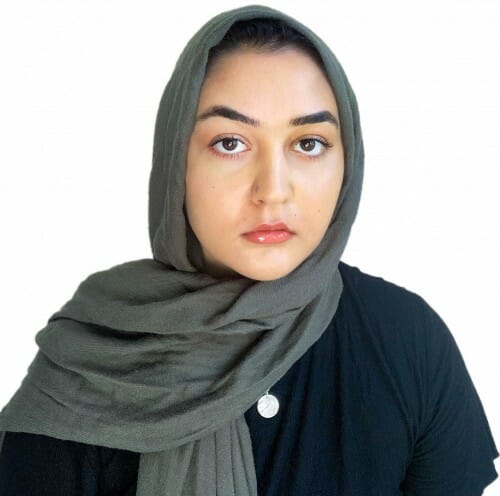 Baban has been named one of 30 recipients of a 2021 Paul & Daisy Soros Fellowship for New Americans, a merit-based graduate school program for immigrants and children of immigrants. She was chosen from a pool of 2,445 applicants, the most in the program’s history.

Baban currently is pursuing a master of fine arts degree in poetry at the University of Virginia. Each Soros Fellow receives up to $90,000 in funding to support their graduate studies.

Born in Pakistan, Baban immigrated to the U.S. with her parents when she was 2. Her mother had sought refuge in Pakistan from the Soviet invasion of Afghanistan and her father had escaped persecution in Pakistan as a Kurd in Iran.

Baban and her siblings grew up in Dearborn, Michigan. In high school, through a Google search of poetry slam events in the area, Baban began writing with InsideOut, a Detroit literary arts program. She later served as the 2017 Detroit Youth Poet Laureate.

She attended UW­–Madison through the First Wave Scholarship Program, the first and only full-tuition scholarship for urban arts. She majored in English and creative writing and also studied Persian, Arabic and Pashto.

Poetry, Baban says, allows her to “be honest about my understanding of the world while changing and imagining new ways of being.”

As a freshman, Baban was a finalist for the inaugural position of National Youth Poet Laureate. She finished second to Amanda Gorman, the poet who delivered an original composition at President Joe Biden’s inauguration in January.

Baban has received both university awards and those from literary magazines, including the Charles M. Hart Jr. Writers of Promise Award, the George B. Hill Poetry Award, the Ron Wallace Poetry Thesis Prize, the Gearhart Poetry Prize, and the Matt Clark Editors’ Choice Prize. Her work has appeared in The Offing, Foundry Magazine, and the Asian American Writers’ Workshop magazine, among others. She recently completed her first full-length poetry manuscript, “Singular Wreckings.”

Those eligible for New American Fellowships include green card holders, naturalized citizens, Deferred Action for Childhood Arrival (DACA) recipients, individuals born abroad who graduated from both high school and college in the United States, and the U.S.-born children of two immigrants.

The award “demonstrates the immense contributions that immigrants of all backgrounds make to the United States,” says fellowship director Craig Harwood. “Each 2021 Fellow is a reminder of what is best about this country.”

Much of Baban’s work touches on concepts of nation and belonging. She intends to continue to look for opportunities to be in community with immigrant writers, whether as a mentor or student herself.

“To me, being a New American means moving about this country with intention of my identity — how it impacts, how I can heal, and what it means for those who come after me,” Baban says.

Another UW–Madison graduate, HaoYang (Carl) Jiang, was awarded a Soros Fellowship in 2018 to pursue a career in law.