Fruit flies in the lab of John Pool happily eat a noni fruit that is normally toxic to fly species. Pool is probing the genetic basis for this ability, which may explain how insects adapt to new foods —  a line of research that could apply to agricultural pests. Video: David Tenenbaum

A fruit called the noni — now hyped for a vast array of unproven health benefits — is distinctly unhealthy for the fruit fly, which has fascinated geneticists for a century. For the species of Drosophila that lives in labs around the world, noni signifies extermination with extreme prejudice: A fly will die if it eats yeast growing on noni.

And yet when collectors swung nets and baited traps with rotting banana on a small island between Madagascar and Africa, they found a close relative, Drosophila yakuba, that merrily gobbles yeast growing on these forbidden fruits.

Yeast growing on noni are the centerpiece on the islander fly’s menu. But on the mainland, “D. yakuba is happy with whatever rotting fruit it can find, as long as it’s not toxic,” says John Pool, an assistant professor of genetics at the University of Wisconsin–Madison. “They scrape off the yeast cells that grow on rotting fruit and eat them, and their larvae swim through the rotting fruit.” Pool is senior author of a study on the discovery that appears in the April 4, 2016 Proceedings of the National Academy of Sciences. 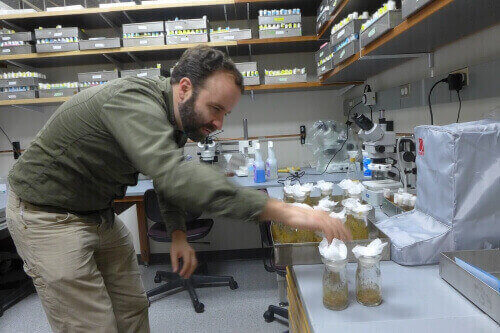 “Most fruit fly labs focus on experiments with a small set of lab strains,” Pool says. “Our interest is using fruit flies to learn about evolution in the field.” Photo: David Tenenbaum

Pool says the toxin-surviving fruit flies on Mayotte are likely to become an important research subject for studying the evolution of dietary changes, “where we can borrow the genetic tools of the common laboratory fruit fly.”

The fruit fly is a workhorse of genetics, but “most fruit fly labs focus on experiments with a small set of lab strains,” Pool says. “Our interest is using fruit flies to learn about evolution in the field.” Because a different fruit fly had also evolved immunity to noni, “Yakuba gives us a chance to ask, how predictable are these transitions? Will they use the same genes, or do these organisms have a wider palette so they can make a completely different choice next time?”

A collection effort on the island of Mayotte, led by Jean David of the French National Center for Scientific Research, identified the unusual Drosophila yakuba population and its bizarre preference for noni.

Island species have played a key role in evolutionary biology since Charles Darwin explored the Galapagos. “Arriving organisms find that life is different, food is different, they have to interact with different species,” Pool says. “They interbreed less, if at all, with their mainland cousins, and for all these reasons, they are more free to go in different evolutionary directions.”

Female yakuba flies on Mayotte prefer not to mate with mainland males, Pool says, helping establish the reproductive isolation that supports evolution of a new species. 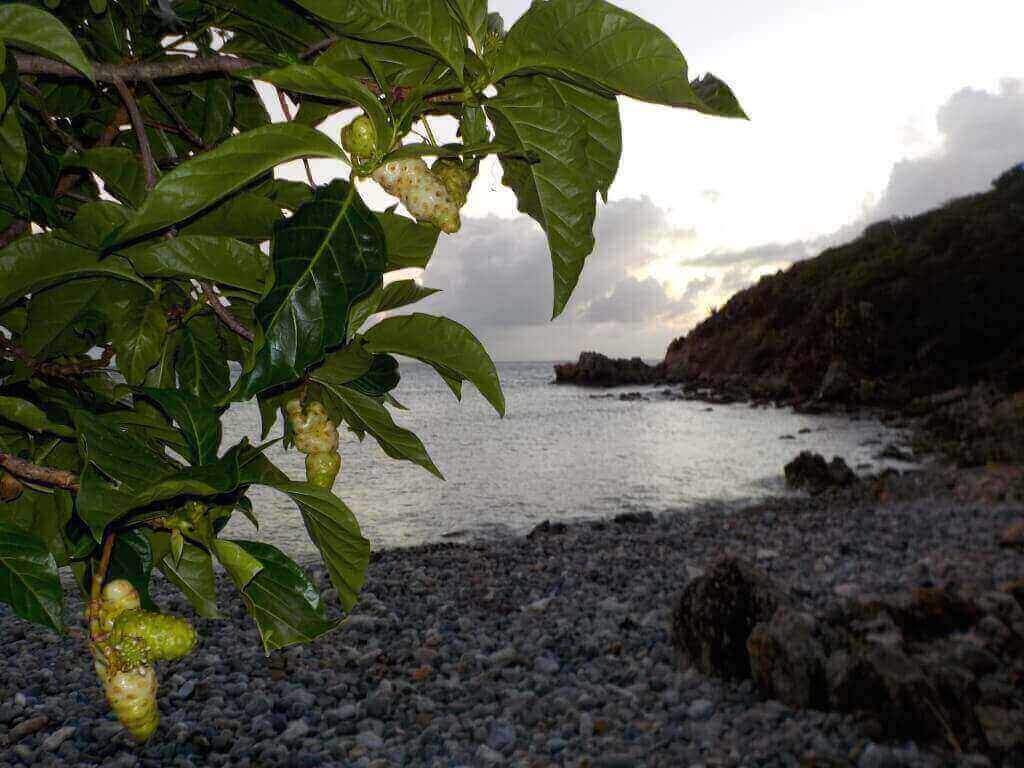 The noni fruit, seen here in the Caribbean, is poisonous to most fruit flies — but not all of them. Photo: John Pool and Amir Yassin

“There were probably not that many options when these flies reached Mayotte,” says Pool, “so they were stuck trying to survive on this toxic fruit.”

Genetic analysis indicated that the island flies developed their immunity to noni toxin after reaching Mayotte about 30,000 years ago —  long after a similar transformation among Drosophila sechellia, another fruit fly in the region that also eats yeast from rotting noni.

And that raised the most intriguing question of all: How closely did the two genetic transformations parallel each other?

In Pool’s lab, postdoctoral fellow Amir Yassin broke that question into one about the flies’ attraction to noni, and a second about its immunity to noni toxin. “We did not see a strong signal of genetic parallelism in the evolution of attraction, but we did for the tolerance genes that render the toxin harmless,” Pool says. “So not only had the same trait evolved in two species, but at least some of the same genes were involved.”

Finding a fly that had recently changed its dining habits was intriguing for a very practical reason, says Pool, observing that most agricultural insect pests undergo a change of menu before they start to attack crops.