Jo Handelsman started as the new director of the Wisconsin Institute for Discovery in February. But she is no stranger to the University of Wisconsin–Madison campus. After receiving her Ph.D. from the university in 1984, Handelsman spent 22 years as a professor of plant pathology and another two years as professor and chair of the Department of Bacteriology. Before being named the new director of WID, Handelsman was a Yale University professor and the associate director for science in the White House Office of Science and Technology Policy. 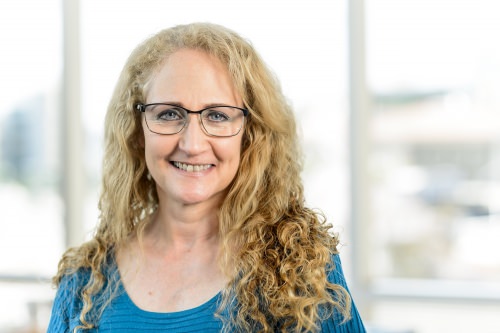 Jo Handelsman, director of the Wisconsin Institute for Discovery, in her office in the Discovery Building at UW–Madison. Photo: Bryce Richter

Here, Handelsman talks about her return to UW–Madison, the global challenges that WID is addressing, where the interdisciplinary research institute has been in its first seven years — and what its future looks like.

Q: What distinguishes WID as a research institute?

A: WID is emerging as a place where interdisciplinary research is done in new ways, building on our strengths of data science, tissue engineering, omics and complex systems. And with those strengths we’re pursuing several areas. Going forward, our key focus is on our themes of healthy people and healthy food. We’re also building a set of hubs that will serve as nucleating forces on campus to generate new groups of scientists doing research. As we initiate new research projects, we’re reaching out in new ways to invite a broad community of scientists and nonscientists across the campus to address the issues that we’re eager to work on.

Q: Why focus on the themes of healthy people and healthy food?

Q: How would you describe the first seven years of WID, and what are you looking to for the future?

A: I think it’s encapsulated in the idea that we’ve built within for the first seven years, and now we are ready to reach outward. The WID faculty have established their research programs and careers and we now have a powerhouse of research talent to extend outward to serve the campus. And so now it’s time to fulfill the original mission of WID, which is to develop new types of interdisciplinary research and to be a catalyst on campus for new constellations of researchers to address big challenges. 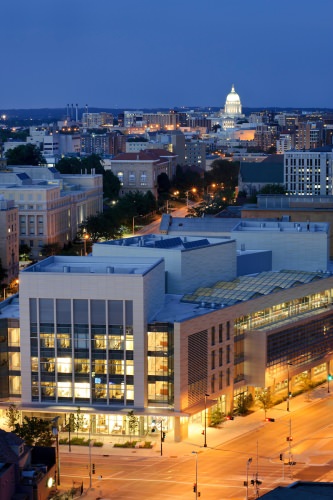 The Wisconsin Institute for Discovery (WID) is housed in the Discovery Building on the UW–Madison campus. The state Capitol is in the background. Photo: Jeff Miller

A: One element of success will be creating a much more systematic way to achieve collaborations across a very broad set of disciplines. We want people to have a mechanism that they know can work for finding collaborators for solving complex problems. Another element of success is making inroads toward fulfilling the promise of solving big problems. Those problems may be the ones we set out to solve, or, as often happens in fundamental research, we may make unexpected discoveries that apply to very different problems. And that, of course, is the thrill of investigation: We don’t know where it will lead.

Q: How does your research program benefit from being in WID?

A: My research has always focused on microbial communities and the interactions of microbes with each other and their environment. The three habitats we’ve been interested in are plant roots, insect guts and soil. And in each case, we’re interested in what makes a community functional, and how do the bacteria in that community make the interactions stable, robust and resistant to the perturbations from the world around them.

My lab has always been interdisciplinary and we’ve always had very strong collaborations with computational and quantitative scientists and statisticians. So the strength in data science at WID is a tremendous advantage to my group, because being able to measure, quantify and model what organisms do is an essential part of biology today.

Q: What drew you back to UW–Madison?

A: What drew me back is closely tied to what WID is doing and what WID can do in the context of the campus and the state. The Wisconsin Idea is still very much alive on this campus, and there’s tremendous commitment among researchers on this campus to solve real problems for real people in Wisconsin. I also find the intellectual curiosity on the UW–Madison campus irresistible, and I’ve never found a match on any other campus. UW–Madison is a community of good and earnest people who are doing brilliant things, while also thinking about the community — on campus and beyond — that they’re a part of, and that shapes the research we do. All of these features of UW that drew me back are exemplified in WID’s mission and plans for the future.