Parasitic worms use their keen senses to wriggle through their hosts

Parasitic filarial nematodes infect hundreds of millions of people, causing diseases such as river blindness and lymphatic filariasis, which can lead to elephantiasis, a severe swelling of the limbs.

Mosquitoes spread the parasitic worms, which engage in sophisticated migrations within their insect and mammal hosts. One worm, Brugia malayi, starts in the mosquito’s gut, migrates to its flight muscles, then to its mouth. In its human host, the worm travels between the lymphatic system and the blood. Researchers have little idea how the nematodes achieve these nomadic lifestyles that are crucial for their survival. 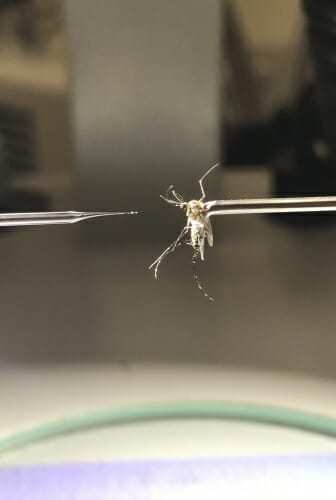 Researchers prepare to inject an anaesthetized mosquito infected with parasitic Brugia malayi nematodes with gene-disrupting molecules to study how the nematodes rely on chemical sensation to migrate within their hosts. Courtesy of Zamanian lab

In new research, University of Wisconsin–Madison scientists provide the first look at the genetic underpinnings of the worms’ migration through their hosts. They identified two genes the nematodes use to respond to cues in their host environment. When the genes are disrupted, the worms are lost and less effective at infecting their hosts.

The genes are part of the nematodes’ chemosensation network, a combination of chemical-sensing proteins and nerve cells that let the parasites detect and respond to molecules in their environment. Because these responses are key for the nematode’s complex life cycle, they’re a potential target for future treatments.

“We’re hopeful that a better understanding of how worms are transmitted between hosts and move within them may lead to new approaches for parasite treatment and control,” says Mostafa Zamanian, a professor of pathobiological sciences in the UW–Madison School of Veterinary Medicine and senior author of the report. The work was published in June in the journal PLOS Biology.

All animals use chemosensation. It’s what allows a bee to follow the scent of a flower or a human to track down the aroma of baking cookies. The Zamanian lab figured that filarial nematodes used the same system to travel to the right part of their mosquito and human hosts at the right time by following specific chemical signatures their hosts produce.

To test this idea, the researchers mined over 40 parasite genomes to identify sensory genes in filarial parasites. Then they measured the expression of chemosensory genes throughout the parasite’s life cycle. They looked at chemoreceptors — proteins that detect a specific signal — during distinct stages of the parasites’ life cycles within human and mosquito hosts, when the parasites migrate to different tissues.

“We saw chemoreceptors turned on and turned off at very specific time points, likely to help the nematodes get to the right destination at the right time,” says Nicolas Wheeler, a postdoctoral researcher in the Zamanian lab and lead author of the new study.

The researchers tested whether disrupting the chemosensation network would impair the worms’ ability to migrate within and infect their hosts. They singled out two genes known to act as messengers for chemosensation in distantly related nematodes: OSM-9 and TAX-4.

To test OSM-9’s function, they exposed the nematodes to the OSM-9-disrupting chemical nicotinamide at different stages of their life cycles. When these nicotinamide-laced worms were fed to mosquitoes, the insects ended up infected with 20 to 40 percent fewer parasites. Those nematodes that did survive in the mosquitoes were worse at migrating to the insect’s flight muscles compared to nematodes with normally functioning OSM-9.

The researchers also extracted larvae from mosquitoes during the stage when they can infect humans and exposed them to nicotinamide. In a petri dish experiment, the larvae became less likely to move toward chemical signals in mammalian blood. The results of the nicotinamide experiments suggested that OSM-9 is key for helping the worms navigate. 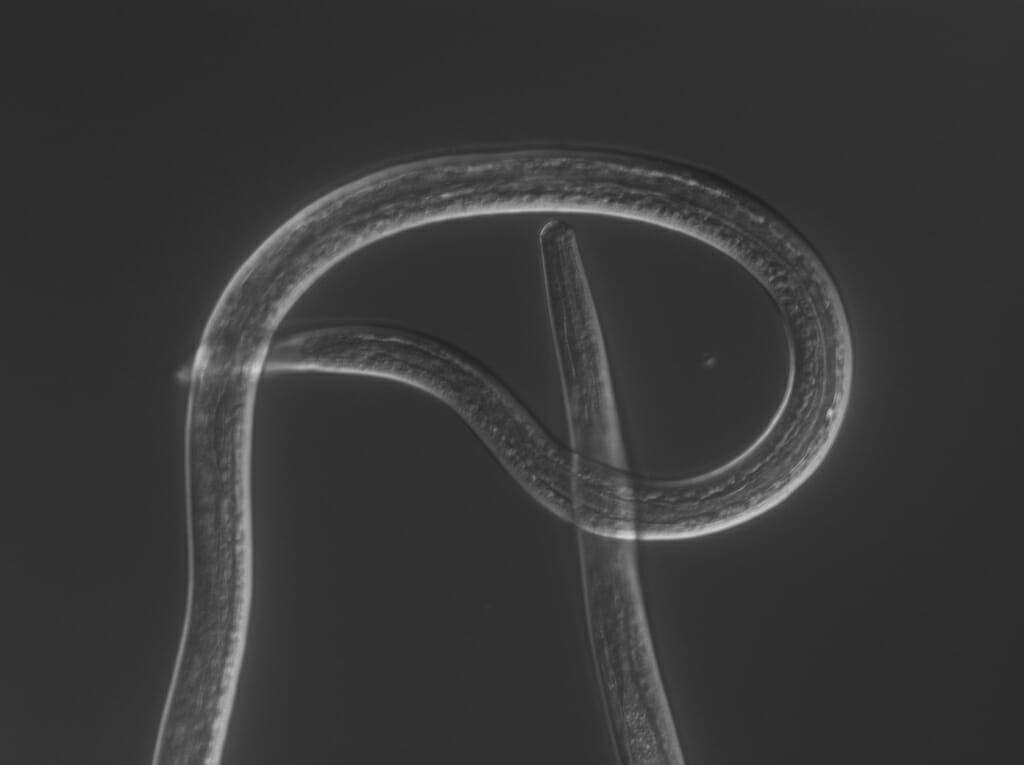 The filarial nematode Brugia malayi during the larval life stage when it can infect humans, where the parasite can cause severe swelling in the limbs known as elephantiasis. Courtesy of Zamanian lab

Using another system, the research team was able to disrupt both OSM-9 and TAX-4 while the nematodes were developing within their mosquito hosts. The researchers had to inject hundreds of mosquitoes by hand with molecules tailored to disrupt each gene — finicky, time-consuming work.

Because the mosquitoes were infected with the parasites and potentially able to transmit them, the researchers had to don head-to-toe protective clothing to avoid getting bitten. Then they tested how well the nematodes could respond to chemical signatures in mammals. 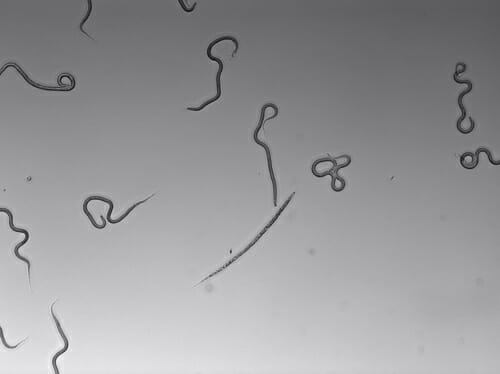 The filarial nematode Brugia malayi during the lifestage when it is taken up by mosquitoes feeding on infected humans. In mosquitoes, the parasite must travel from the insect’s gut to its flight muscles and eventually its mouth to make it back to human hosts. Courtesy of Zamanian lab

“It was worth it in the end, because we were able to show both OSM-9 and TAX-4 are involved in the infective larva’s ability to crawl toward (host signals in the blood),” says Wheeler. These are the first two genes to be linked to migratory behavior in these parasitic nematodes.

There are effective treatments against filarial parasites, but the complex drug regimens have potentially severe side effects, and the nematodes have developed drug resistance. There is also growing evidence that sensory systems play an important role in how parasites respond to existing antiparasitic drugs. A better understanding of how the worms detect chemical signatures and find their way within hosts could one day help researchers disrupt these critical migrations, potentially bolstering treatment.

“This is a starting point,” says Wheeler.