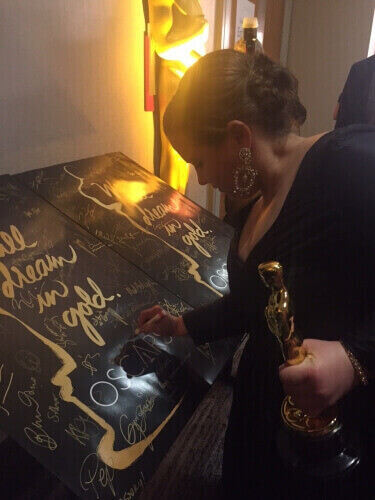 UW-Madison alumna Nicole Rocklin, seen signing a poster backstage, was one of the producers of the movie “Spotlight,” which won Best Picture at the 88th Academy Awards on Feb. 28. Photo courtesy of Nicole Rocklin

It’s just a few days after winning an Oscar, but life isn’t all that different for Badger alum Nicole Rocklin.

“I woke up and had to make my kid breakfast and sweep the floor,” Rocklin says. “Day-to-day life doesn’t change that much.”

Yes. Many things remain the same, but there is a bit more of a spotlight, thanks to the movie “Spotlight.” Rocklin was one of the producers of the movie, which won Best Picture at the 88th annual Academy Awards on Feb. 28. The film, starring Michael Keaton, Mark Ruffalo, Rachel McAdams and Liev Schreiber, tells the story of the Boston Globe journalists who uncovered sexual abuse in the Roman Catholic Church. The movie received six Oscar nominations and also won for Best Original Screenplay.

Rocklin grew up in California and graduated with honors from UW–Madison in 2001 after double-majoring in history and Afro-American studies.

“My college experience was one of the highlights of my life. It’s the only time in life you have that much freedom to explore so many things,” Rocklin says. “I miss it.”

After graduation, Rocklin moved back to California. She knew she wanted to work in entertainment but wasn’t quite sure in what way. After working for an entertainment law firm, she took a job with Jerry Bruckheimer Films. She then started her own production studio and partnered with fellow producer Blye Faust. 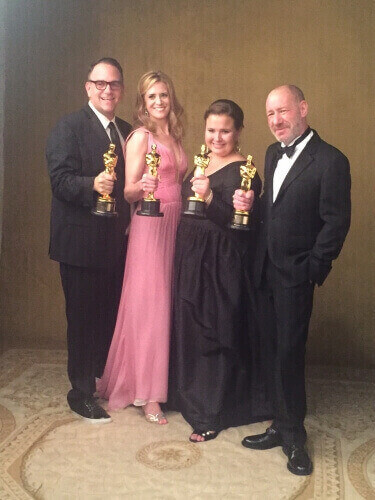 “We’ve been focused on smaller sorts of projects,” Rocklin says. “Some people put 20 things out there. We don’t do that. It’s not who we are. We want to tell stories about real people.”

It took seven years to bring “Spotlight” to the screen.

In an era of shrinking newsrooms, Rocklin hopes the movie reminds people of the importance of journalism. She sees the Flint water crisis as yet another example of why good journalism is necessary. Rocklin says the best thing people can do is buy their local newspaper.

“If The Boston Globe didn’t have an investigation team, we might not know the story. As we all know, knowledge is power. This story spread throughout the world,” Rocklin says. “There are still so many stories to tell. If we don’t have reporters investigating, who is going to tell them?”

Rocklin’s father died this past year. He was a huge fan of the Green Bay Packers, particularly Aaron Rodgers. As she entered the Oscars ceremony, Rocklin spotted the quarterback with his girlfriend, actress Olivia Munn. Rocklin has been around her share of famous people and doesn’t get star struck. But it was something different with Rodgers. She went up and introduced herself, explaining that she had lost her dad this past year and he was a big fan.

“Seeing you today makes me feel like my dad is here,” Rocklin said to Rodgers.

“I’m rooting for you,” Rodgers said.

After that chance encounter, Rocklin had a feeling that it was going to be a good night. And it was.

Days after winning the Oscar, Rocklin found herself at the zoo with her son. But she had a special stop to make — and she brought along her Oscar.

“We went to see my dad at the cemetery,” Rocklin says. “Winning an Oscar is a wonderful accomplishment, but the things that are important to me stay the same — my family, friends and making a difference in the world. This just gives me more of a platform.”