A scene from Star Wars Episode VIII: The Last Jedi, which comes out December 15. Rose helped design a new virtual camera system that moves like a film camera but allows the director to see the results of his movements within a digital scene. Image courtesy of Star Wars

As a child, Rachel Rose wore clothes emblazoned with C-3PO and drifted off to sleep on Star Wars sheets. And while the adventures of Luke Skywalker, Princess Leia and the Jedi knights may have filled her dreams, she never imagined she’d grow up to help bring stories like theirs to life.

Yet Rose does exactly that as an engineer at Industrial Light & Magic, the motion picture visual effects company founded by Star Wars creator George Lucas. And the UW–Madison computer sciences department played a key role in her path from young fan to one with the Force.

Growing up in Orlando, Rose nurtured a love of Star Wars and also discovered a budding fascination with computers. 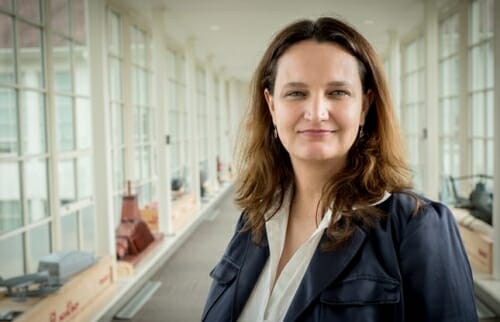 “It started really, really early, even though we didn’t have a computer until I was a junior in high school,” she says. “Just the whole idea of computers being able to execute on ideas fascinated me.”

Rose didn’t learn to code until she was an undergrad at Grinnell College, but by the time graduation neared, she was seeking out a strong computer sciences graduate program. Drawn to the reputation of UW–Madison’s CS department, Rose earned a master’s degree in 2003 and a Ph.D. in 2007 there, focusing on computer animation.

“The CS program is full of fantastic professors who were really motivating,” she says. “They helped me make connections so by the time I was out of grad school, I already knew a lot of people.”

One of those connections, fellow computer sciences grad Lucas Kovar, worked at Industrial Light & Magic in San Francisco and put in a good word for Rose. She was hired right out of school as an engineer in research and development, the group that builds technology — or improves its quality or efficiency — so artists can bring images to the screen.

She especially enjoyed working on computer animation, devising ways to animate a character. It’s a role she likens to the person who builds a puppet, who must think through what the puppeteer will need to make the character move in certain ways.

These days, Rose leads the group that handles research and development in the burgeoning area of virtual production.

“Virtual production at ILM is the set of tools and workflows that we use to do digital production in similar ways to what one would do in live action production,” she says.

For instance, she’s credited on Rogue One, the first standalone Star Wars film released last year, for helping to design and develop a new virtual camera system that moves like a film camera but allows the director to see the results of his movements within a digital scene.

“[Director] Gareth Edwards used the virtual camera to record digital camera moves during the space battle in a handheld way that better matched the feel of the rest of the film — but at a huge scale, since the space battle is humongous,” she says.

“Being able to collaborate and work with others is the most important thing no matter where in the company you are. The ability to both listen and change your own thoughts on a project is crucial.

Rose and her team have also contributed to the franchise’s upcoming releases — Star Wars Episode VIII: The Last Jedi, which picks up the action from The Force Awakens starting December 15, and Solo: A Star Wars Story, offering the backstory of Han Solo and opening in May 2018.

“In R&D, we tend to work on every film,” she says, adding that she’s not at liberty to divulge details about the forthcoming movies.

But Rose is proud to talk about working at a company long known for employing women in leadership roles, and also honest about the work that still needs to be done to make her industry more equitable.

“I feel really lucky to be able to work with a bunch of women at the top,” she says. “But there are still times when I’m the only woman in a meeting.”

It’s important to her that others — colleagues both younger and older, as well as children like her seven-year-old daughter and four-year-old son — notice someone like her doing cutting-edge work and leading a team in tech.

“I try to do a lot of outreach, a lot of presentations, a lot of standing in front of people to let them see I’m out there,” she says.

Most days, though, Rose focuses on the work at hand, the latest creative problem to be tackled and the people with which to solve it.

The key to success at work, she says, is quite simple. “Being able to collaborate and work with others is the most important thing no matter where in the company you are,” she says. “The ability to both listen and change your own thoughts on a project is crucial.”

It can also help to have common ground to refer back to — and Rose and her coworkers share a passion for Star Wars and the sense of wonder and adventure it instilled in them as children.

“It was special,” she says of growing up with the films. “So many of us are here at ILM in part because of that love.”

The space battles in the Star Wars film series are done with the help of Industrial Light & Magic, where Rachel Rose works. Image courtesy of Star Wars