Fire in a crowded theater? Nitrate film is crumbling as experts strive to salvage the past 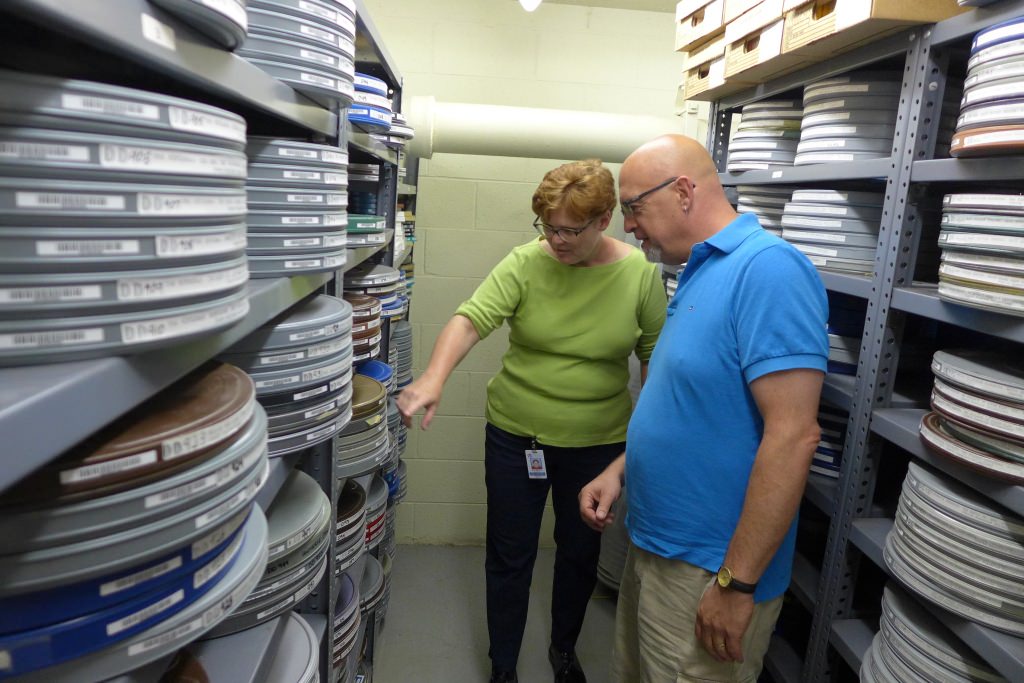 Mary Huelsbeck, assistant director of the Wisconsin Center for Film and Theater Research, and director Jeff Smith, in the Wisconsin Historical Society vault. Old movies, TV classics, and a series of Soviet films share the space on both 35 millimeter reels and the 16 millimeter reels seen here. David Tenenbaum, University Communications

A University of Wisconsin–Madison group has just published results from a six-year exploration of old, unstable film stock that nevertheless holds the oldest heritage of moving pictures.

Called “nitrate film,” it’s flammable and fragile. Many films shot a century ago are largely transparent, or clumped and unable to be seen, let alone projected. 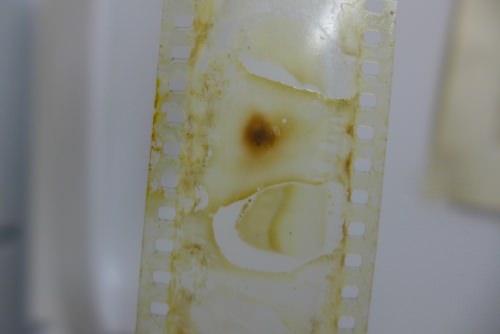 This deteriorated cellulose nitrate film in cold storage at the Wisconsin Center for Film and Theater Research is past the point of no return. David Tenenbaum, University Communications

The Wisconsin Nitrate Film Project at the Wisconsin Center for Film and Theater Research was the brainchild of Heather Heckman, then a communication arts graduate student in Madison. Heckman, who now directs the Moving Image Research Collections at the University of South Carolina, wanted to address nitrate film from multiple directions, and so the effort combined chemical analysis of the film, review of historical literature on it, and information from professionals who have handled, stored and shipped nitrate film.

Cellulose nitrate film stock was introduced in the late 1800s as a medium to hold the emulsion that carries a photographic image.

“Film had to be transparent and flexible enough to run through the camera and projectors,” says Smith, “and this engineering problem was solved by invention of cellulose nitrate. At first, people did not think about it being highly flammable, but the word got around that the brown powder it formed after it degraded was especially combustible. Our tests, on a small sample, showed the powder to be non-hazardous, but more tests are needed.”

A Wisconsin National Guard unit shows off its cavalry and horse-drawn artillery along the Mexican border in 1916. Sporadic degradation is visible in the film. The full film is here. Credit: Wisconsin Center for Film and Theater Research collection

The phase-out of nitrate film in favor of “safety film” started in the 1930s, and Eastman Kodak “retired” nitrate film by 1952. Many older films have been transferred to modern film stock, but the remaining nitrate film amounts to “a whole visual heritage,” Smith says. “If you look at the silent movies, the rate of survival is around 20 percent. Preserving what we have left is important, because the losses have been massive.”

The nitrate project was needed, Smith says, “because we did not know what happens at a very basic chemical level.”

The project’s researchers based their recommendations on tests of surplus nitrate stock.

“The big finding was to keep it dry,” Smith says. “Humidity is one of the most important factors to control, and temperature comes second.” 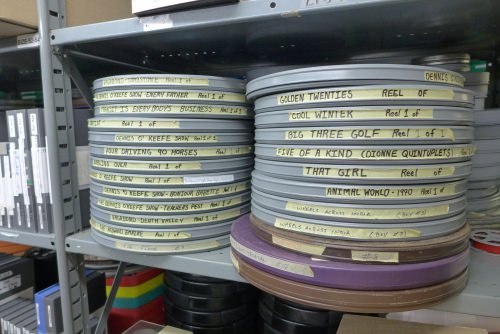 The Wisconsin Center for Film and Theater Research stores about 20,000 film and videotape titles in the Wisconsin Historical Society. A row of freezers holds a handful of nitrate films that are likely bound for storage at the Library of Congress. According to Jeff Smith, “The inventory once contained historical curiosities, a short on Clark Gable’s career in the navy, newsreels about the war effort during World War II, and a Bureau of Visual Instruction short: ‘Wisconsin, your government at work.’ But we have downsized our nitrate collection, sending some titles, like the Gable short, to other archives.” David Tenenbaum, University Communications

Beyond the science, the project also created an oral history from people experienced in handling nitrate stock. “These were long-form interviews of projectionists, preservationists and people who worked in photo labs,” says Smith. “There has been lore that nitrate would spontaneously combust, but we heard that nitrate was to be respected but not feared. It needs to be handled with care, but it’s not going to explode.  It’s not nitroglycerin,” even though cellulose nitrate is a close relative of guncotton and other flammables.

Most of the well-known films from the 1930s and ‘40s were shot on nitrate, but were transferred long ago to safety film stock, says Mary Huelsbeck, assistant director of the Wisconsin Center. Although transfer and restoration is expensive, scanning nitrate films is not as risky as projection.

Still, the remainder deserves preservation, says Huelsbeck. “What’s left on nitrate documents early film history by independent film makers and studios. This is a part of our past life that we can’t find documented anyplace else.”

Some of the most endangered films date to beginning of motion pictures, between 1893 and 1910, says Smith. “They are short, attention grabbing. I see them as equivalent to a YouTube video today.”

Stills from “Our Own Gang,” a silent shot in Madison in 1933 that was inspired by the popular “Little Rascals” series. The film, a paid ad for the businesses seen in the many frantic chases. Wisconsin Center for Film and Theater Research collection

Despite its instability and danger, “For its pictorial quality elements, its clarity, its contrast, nitrate was the best,” says Smith. “Many people say you have not seen the classic film noir titles unless you have seen them on nitrate.”

The Wisconsin Nitrate Film Project was supported by the Wisconsin Center for Film and Theater Research, the National Endowment for the Arts, and the Wisconsin Historical Society.