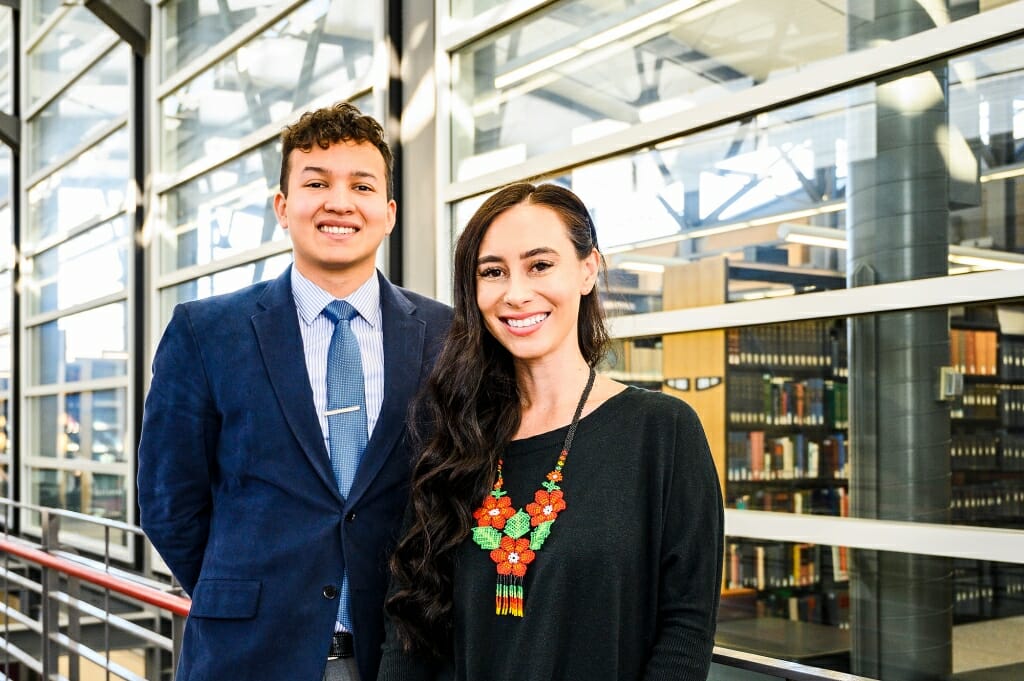 Lorenzo Gudino and Catelin Aiwohi are co-presidents of the Indigenous Law Students Association at the UW Law School. The group exists to create a forum for Native and Indigenous students within the Law School and to shed light on issues impacting tribal communities. Photo by Brian Huynh

As first-year law students in 2018, Catelin Aiwohi and Lorenzo Gudino instantly gravitated toward each other. They were among a handful of first-year students that fall who identified as Native or Indigenous at the University of Wisconsin Law School.

“Because we’re such a small group, we really do stick together,” Aiwohi says.

The two are now friends and co-presidents of UW’s Indigenous Law Students Association, a group of about 10 students. Aiwohi, a Native Hawaiian from Wailuku, earned a bachelor’s degree in elementary education from Chaminade University of Honolulu. Gudino, of Oak Lawn, Illinois, earned a bachelor’s degree in journalism from Northwestern University. He is a citizen of the Fort Sill Chiricahua Warm Springs Apache.

On March 6-7, the student association will present its 34th annual Coming Together of Peoples conference, the longest-running, student-organized Federal Indian Law conference in the country. About 100 attendees are expected. The conference is free and open to the public.

The conference overlaps with the Law School’s hosting of the “Our Shared Future” heritage marker, which recognizes university land as the ancestral home of the Ho-Chunk people. Aiwohi and Gudino recently shared their thoughts on the marker, the upcoming conference, and the student group they lead.

Why did each of you want to be part of the Indigenous Law Students Association?

Gudino: I learned as an undergraduate that I perform better and am more engaged with my studies if I’m part of a Native community on campus. Those bonds keep me on track.

Aiwohi: It would be nice to not be a minority here, but the fact is, we are. By being part of a group like this, I can help ensure that we are a part of the consciousness of this institution. 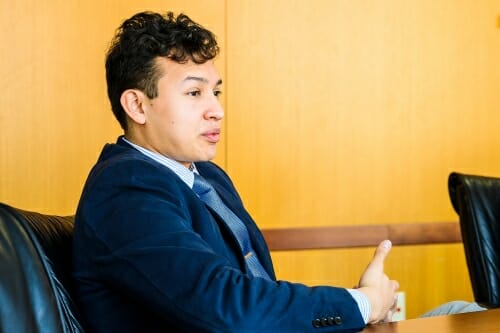 “It’s so important to know that long history of attempted forced removals the Ho-Chunk went through …” says Lorenzo Gudino. Photo by Brian Huynh

The national conference has a long history on this campus. What will be discussed this year?

Aiwohi: This year’s theme is tribal economic development. We have very diverse panels, covering topics such as e-commerce, sustainable agriculture, and whether tribes should participate in the cannabis economy. With every topic, we always address the legal nexus.

Gudino: The conference comes from the student desire to have these really diverse legal issues talked about more broadly. As students, we are taking it upon ourselves to learn more about these issues while also inviting the broader community to get a glimpse of them.

One of your group’s community service projects is an “Indian Wills Caravan,” which will occur over spring break this year. How does it work?

Gudino: Last year, four of us, myself included, traveled to five Native communities in Wisconsin and completed about two dozen wills pro bono. Estate planning is an awkward topic for anyone to bring up. It is especially difficult if an attorney isn’t competent about your culture or considerate of it. This project breaks down those hurdles, and it’s one way that we can use our legal education to help our tribal communities. For me personally, it was reinvigorating. I’d had a hard first semester, so it helped me recommit to why I’m here in the first place. 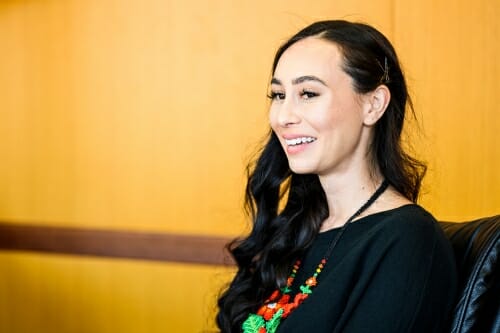 “Our communities want to be seen, to be heard, and, really, to be respected,” says Catelin Aiwohi. Photo by Brian Huynh

The “Our Shared Future” marker was dedicated in June and is now traveling across campus to increase its public awareness. What has been your reaction to it?

Aiwohi: The marker is a visible reminder of where we are, whose lands these are, and the people who made a lot of sacrifices for us to be here. Collectively as a university community, as well as individually as students, there is still so much more to do. But I do think it’s a good first step.

Gudino: It’s so important to know that long history of attempted forced removals the Ho-Chunk went through and how important their home was to them and how they kept coming back and back and back. I try to think about it every day — that it is a privilege and an honor to be here and that I’m a guest. Because I am a guest. These are not my homelands. I do not have more of a right than anyone else to go to this school or occupy this space.

The university is working to imbed the marker’s message long-term in its teaching and learning. What would a successful effort along those lines look like to you?

Aiwohi: I think often our communities feel invisible. We’re often unseen and unheard, even in discussions about diversity and how to be more inclusive of minority communities. So I think the goal of the marker is visibility. Our communities want to be seen, to be heard, and, really, to be respected.

Gudino: To complement Catelin, I’d want every person walking up Bascom Hill to be forced to recognize their place on Ho-Chunk land and to really think about how America was formed and settled and the reality of what that meant to Indigenous people.

What could the university do to ensure the success of Native and Indigenous students?

Aiwohi: Hire Indigenous faculty, include Native communities in programming and in the curriculum, admit Indigenous students and make a genuine effort to retain them.