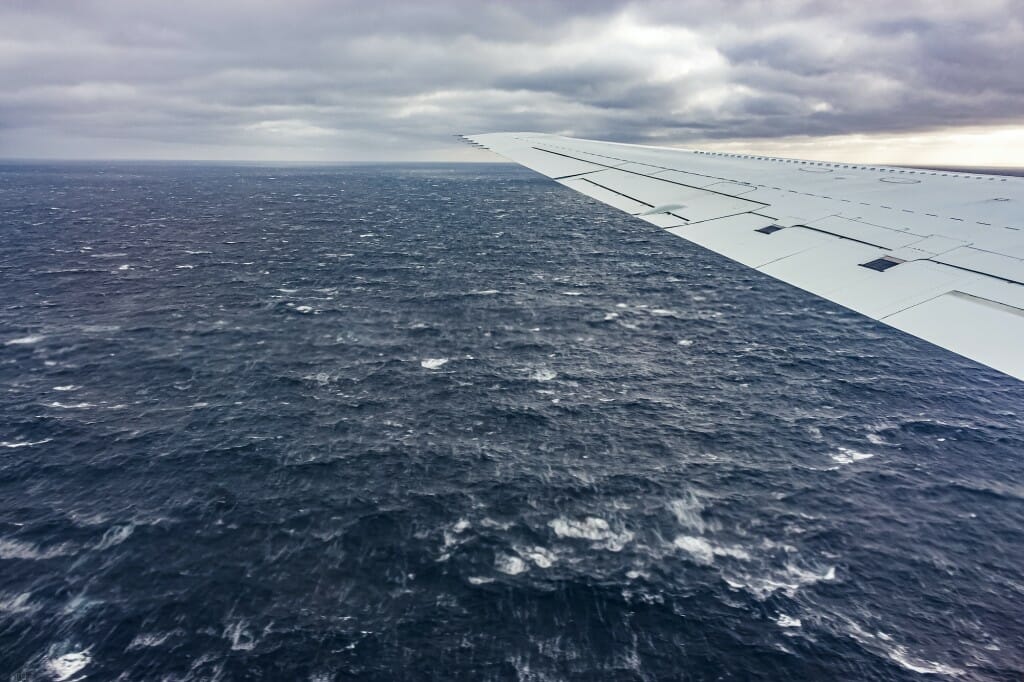 The view from the DC-8 research aircraft as it flies through the marine boundary layer, the portion of the atmosphere close to the ocean’s surface where the ocean affects processes like cloud formation. Sam Hall

Stand on the ocean’s shore and take a big whiff of the salt spray and you’ll smell the unmistakably pungent scent of the sea. That ripe, almost rotting smell? That’s sulfur.

Marine plankton breathe more than 20 million tons of sulfur into the air every year, mostly in the form of dimethyl sulfide (DMS). In the air, this chemical can transform into sulfuric acid, which helps produce clouds by giving a site for water droplets to form. Over the scale of the world’s oceans, this process affects the entire climate.

But new research from the University of Wisconsin–Madison, the National Oceanic and Atmospheric Administration and others reveals that more than one-third of the DMS emitted from the sea can never help new clouds form because it is lost to the clouds themselves. The new findings significantly alter the prevailing understanding of how marine life influences clouds and may change the way scientists predict how cloud formation responds to changes in the oceans.

By reflecting sunlight back into space and controlling rainfall, clouds play significant roles in the global climate. Accurately predicting them is essential to understanding the effects of climate change.

“It turns out that this story of cloud formation was really incomplete,” says Tim Bertram, a UW–Madison professor of chemistry and senior author of the new report. “Over the last three or four years, we’ve been questioning parts of that story, both through laboratory experiments and with large-scale field experiments. Now we can better connect the dots between what’s emitted from the ocean and how you form these particulates that encourage cloud formation.” 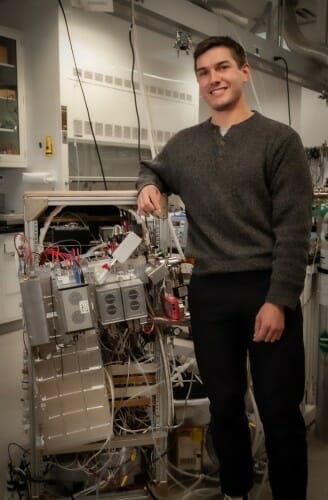 With collaborators from 13 other institutions, Gordon Novak, a graduate student at UW­–Madison, constructed the analysis that will be published Oct. 11 in the Proceedings of the National Academy of Sciences.

A few years ago, this group of collaborators, led by Patrick Veres at NOAA, discovered that on its way to becoming sulfuric acid, DMS first turns into a molecule known as HPMTF, which had never been identified before. For the new study, the team used NASA-owned, instrument-laden aircraft to capture detailed measurements of these chemicals over the open ocean both inside of clouds and under sunny skies.

“This is a massive DC-8 aircraft. It’s a flying laboratory. Essentially all of the seats have been removed, and very precise chemical instrumentation has been put in that allows the team to measure, at very low concentrations, both the emitted molecules in the atmosphere and all of the chemical intermediates,” says Bertram.

From the flight data, the team discovered that HPMTF readily dissolves into the water droplets of existing clouds, which permanently removes that sulfur from the cloud nucleation process. In cloud-free areas, more HPMTF survives to become sulfuric acid and help form new clouds.

Led by collaborators from Florida State University, the team accounted for these new measurements in a large, global model of ocean atmospheric chemistry. They discovered that 36% of the sulfur from DMS is lost to clouds in this way. Another 15% of sulfur is lost through other processes, so the upshot is that less than half of the sulfur marine plankton release as DMS can help nucleate clouds.

Until recently, researchers have largely ignored the effects clouds have on chemical processes over the ocean, in part because it is difficult to obtain good data from the cloud layer. But the new study shows both the power of the right instruments to get that data and the significant roles clouds can play, even influencing the processes that give rise to the clouds themselves.

“This work has really reopened this area of marine chemistry,” says Bertram.