Mark Cook, a professor of animal science at the University of Wisconsin–Madison whose research yielded advances in human health and food production, died from complications of cancer at home on Saturday, Sept. 9, in the presence of friends and family.

With more than 40 patents, three startup companies and a strong record of involvement in university initiatives, Cook was not one to be hobbled by conventions, departmental boundaries or a “we can’t do that here” mindset. Through it all he maintained a dedication to teaching that extended to his department’s introductory course, Animal Science 101. 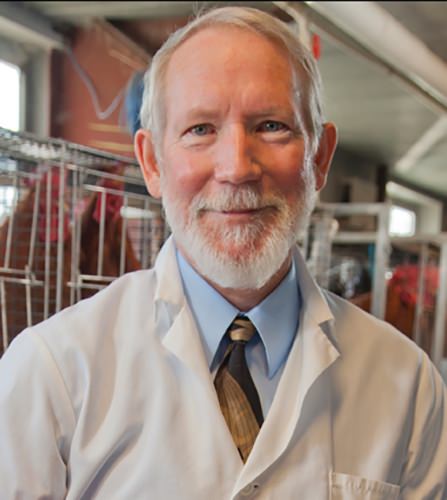 With more than 40 patents, three startup companies and a strong record of involvement in university initiatives, Mark Cook was not one to be hobbled by conventions, departmental boundaries or a “we can’t do that here” mindset. Photo: Michael Kienitz, used with permission

“Mark was a distinguished scientist, with a remarkable commitment to innovation and technology transfer,” says Kathryn VandenBosch, dean of the College of Agricultural and Life Sciences. “His work embodied the Wisconsin Idea, seeking advances and solutions in the areas of health and agriculture. He was also a man of integrity, who felt a deep sense of service and commitment to his students, colleagues and the university. He will be greatly missed.”

An avowed “chickenologist,” Cook was well-known in the poultry industry, says Daniel Schaefer, chair of Cook’s department and his friend for 17 years. “His discoveries and opinions were respected internationally. Even though he had no formal extension appointment, he was frequently called by poultry companies on nutrition or immunology questions.”

Cook earned a Ph.D. at Louisiana State University in 1982 while studying the relationship between pathogens, nutrition and the poultry immune system. At the UW, his wide-ranging interests and unstoppable curiosity found full expression in the entrepreneurial activity he pursued with a passion to make a difference in the world.

His discoveries were surprising and displayed immense intellectual clarity, but he realized that they could only reach their full benefit by being commercialized.

In 2005, Cook and colleagues created the spinoff company Isomark to advance a technology that promises a much earlier, hands-off detection of infection, based solely on measuring isotopes in the breath. 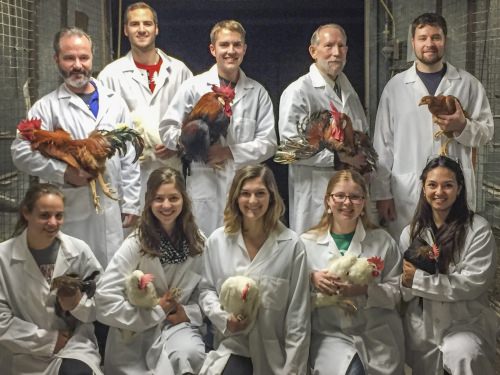 An avowed “chickenologist,” Cook — shown in a 2016 holiday photo in his lab — was well-known in the poultry industry, says Daniel Schaefer, chair of Cook’s department and his friend for 17 years. Photo: Gage Wautkee

In 2015, Cook helped form Ab E Discovery to advance the finding that chickens can produce a protein that blocks a signal used by bacteria to shut down the host immune system. The protein is grown in eggs and sprayed on animal feed to replace antibiotics. Given the drive to replace those ubiquitous drugs in the meat industry, Ab E could be poised for rapid growth.

More recently, Cook’s interest in novel animal byproducts spawned an effort to develop an oil used by birds to preen their feathers as a fish food additive. The oil, called cosajaba by Cook and his collaborators, seems to dampen the stress response in fish — a potential solution to a common problem in aquaculture.

Cook’s biggest commercial success to date was work on conjugated linoleic acid, a fatty acid that became a dietary supplement marketed for reducing body fat while maintaining lean muscle mass. Cook developed CLA in the 1990s in conjunction with Michael Pariza, then a professor of food microbiology and toxicology. The alliance grew quickly, based on the accessibility that seemed a Cook hallmark.

“Back about 1989, I was walking toward Picnic Point on a bright day,” recalls Pariza, “and he came running by and stopped to talk. We got to discussing our research and by the end of the walk, we were collaborators. He was that kind of guy. You’d start talking about your ideas, he’d inject his, and pretty soon you got something going.” 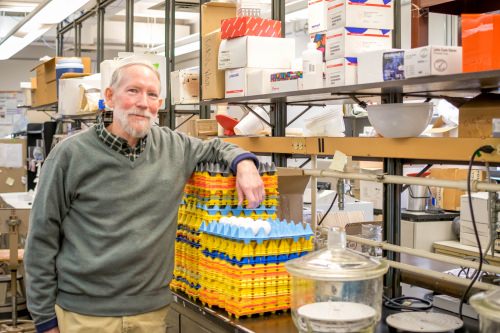 Cook formed a company to advance the finding that chickens can produce a protein that blocks a signal used by bacteria to shut down the host immune system. The protein is grown in eggs and sprayed on animal feed to replace antibiotics. WARF Photo

Cook was a modest man who possessed “capabilities and thought processes well beyond many of us,” says Gerry Weiss, a Grant County farmer with a doctorate in animal science who conducted swine trials for several of Cook’s projects. “His students, professional associates and friends addressed him with a level of respect and admiration that very few people will ever hope to receive.”

A second pillar of Cook’s productivity was a new model of research funding, says Schaefer. “Instead of having the program depend on federal grants, he emphasized patenting and royalties. Mark became dissatisfied with the fact that once he published a discovery, it became public knowledge, and therefore was no longer useful to an entrepreneur or business” because it could not be protected by patent. “He determined to transfer his intellectual property to WARF (Wisconsin Alumni Research Foundation), and thereby protect the usefulness of the information for licensees, who could put the discovery into commercial practice.”

Those interests were the logical groundwork for the 2014 Discovery to Product initiative, in whose formation Cook was instrumental. D2P is a collaboration between UW–Madison and WARF that advises and supports business ideas from faculty, staff and students.  Fifteen businesses have been created from the 24 projects funded by D2P; other projects are in the pipeline.

John Biondi, D2P’s founding director, calls Cook “one of those rare individuals who is not only at the top of his game academically, but is a triple threat. He’s an excellent teacher and professor, an incredibly insightful and clever researcher, and was able to turn that research into entrepreneur endeavors at an amazing rate. By looking outside of academia to commercial endeavors, he was able to shine a light down both those paths.” 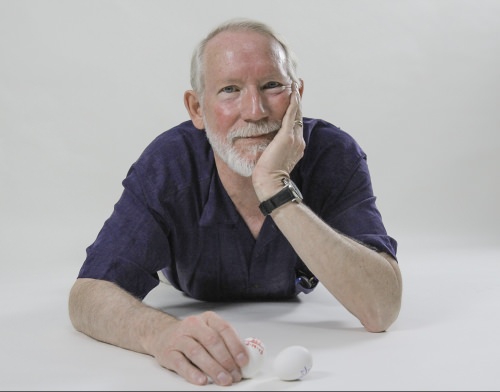 Cook was a modest man who possessed “capabilities and thought processes well beyond many of us,” says Gerry Weiss, a Grant County farmer who worked on several of Cook’s projects. “His students, professional associates and friends addressed him with a level of respect and admiration that very few people will ever hope to receive.” Photo: Sevie Kenyon

Beyond the track record of success, Cook had other ways to encourage creativity and collaboration, says Biondi. “He was very mild-mannered, humble, self-effacing. You would never know he was so accomplished. He made no attempt to create a cult of personality. It was really the opposite. He worked with people on projects as an equal as opposed to a demigod, yet he was exceptional for his ability to innovate, to develop these things out of his lab.”

Amid his wide scientific, entrepreneurial and industry interests, Cook devoted more than a decade to teaching the introductory animal science course. “He taught it for the long haul, with a commitment to the freshmen in the class,” says Schaefer, “and he taught it with enthusiasm and rigor. He was highly regarded by those students. Mark was a great teacher.”

Cook also encouraged graduate students in several ways, says Maria Arendt, who has been working toward her Ph.D. in his lab. “As a mentor, Mark gave you the independence to both succeed and make mistakes, and learn from them. That’s allowed me to develop as an independent researcher and gave me internal confidence in my work.”

Arendt learned what she calls “life lessons” in Cook’s lab while she attended veterinary school. “Every time I thought I did not want to become a vet, I would storm in and say, ‘I’m quitting today,’ but he would find a way to talk me out of it. In a lot of ways, I owe my veterinary degree to Mark. Mark always had a vision of what my career would look like even when I lost sight of that myself.”

“He was very mild-mannered, humble, self-effacing. You would never know he was so accomplished. He made no attempt to create a cult of personality. It was really the opposite.”

In later years, Cook devoted some of his boundless energy to academic affairs, culminating in leadership of the University Committee, a key element of campus faculty governance. “Mark had an intense commitment to UW–Madison, was willing to be a team member at all levels, meaning the department, college, campus — even serving as chair of the University Committee,” says Schaefer.

Cook is survived by his wife, Ellen, described as “the love of my life” in a parting letter to friends and colleagues, and by three children, Lynn, LeighAnn and Crague, and their families.

“Mark wrote that being in our department on this campus was his ‘dream job.’ And he performed as though it was his dream job,” Schaefer says. “We miss him already.”

Mark Cook was profiled in this 2015 video for his Entrepreneurial Achievement Award. University Communications video.