Gretchen Anding gets a good laugh from the question: When you were a little girl, did you dream of leading the Institutional Review Board at a major research university?

“I don’t think anybody grows up dreaming of working in research compliance, and if they did, I would love to talk to them,” says Anding, who became the director of the University of Wisconsin–Madison IRBs on April 1. 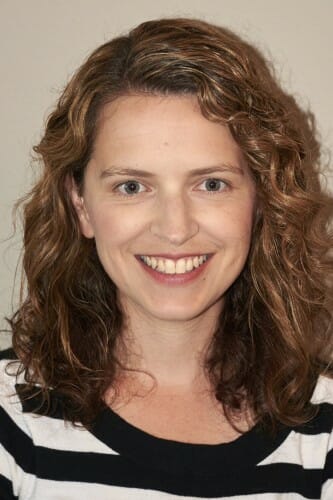 Anding studied biology and chemistry as an undergraduate. But it was a course in bioethics that led her to pursue a master’s degree in bioethics from the Medical College of Wisconsin. That steered her toward a career in research compliance, first at the Aspirus Wausau Hospital and then as a member of the UW–Madison IRB office in 2004. In 2010, she was promoted to assistant IRB director.

At UW–Madison, IRBs review all research involving human subjects. Research cannot begin until the IRB has evaluated and approved it. This is true even if a researcher perceives there are no risks for people who participate in their research.

As the director of UW’s IRBs — the Health Sciences IRB, Minimal Risk IRB and the Education and Social/Behavioral Sciences IRB — Anding leads a busy and evolving enterprise.

In April, the IRB offices merged to create one central IRB office to support the human research protection program on campus. And in June, all but the Health Sciences IRB will merge to become the Minimal Risk Research IRB, which will review minimal risk educational, social and behavioral human subjects research, conduct medical records review, and evaluate minimal biomedical interventional research.

Merging the IRBs is a big change, but one that Anding says will allow for greater collaboration, consistency and communication in the human research protection program compliance process on campus.

“We have created the central IRB office and implemented other strategies as part of a campus human research protection program reorganization, with the goal of reducing administrative and research burden, while upholding the protection of human subjects, research accountability and compliance with federal regulations,” explains Nadine Connor, associate vice chancellor for research policy and compliance.

The reorganization, known as the IRB Efficiency Project, has been led by the Office of Research Compliance (within the Office of the Vice Chancellor for Research and Graduate Education). It began in 2017 and will culminate with the creation of a single IRB office in 2021.

Moving the Reliance and Navigation Team, or RELIANT, to the Office of Research Compliance was part of the transition. It assists researchers with collaborative and multi-site research issues, helping identify the best single IRB review option for studies and facilitating reliance agreements. It also helps study teams navigate institutional requirements that lie outside the IRB approval process.

“The IRB Efficiency Project has allowed our IRB offices the chance to get to know each other and how we have operated, and how we can take components of each of our operations and highlight the great things that each office has been doing,” Anding says. “I am also looking forward to ensuring that the role of the IRB is very clear and that we are not taking on areas of research compliance outside of the IRB’s role.”

Merging the IRBs is a big change, but one that Anding says will allow for greater collaboration, consistency and communication in the human research protection program compliance process on campus.

“Gretchen’s IRB experience and accomplishments as the IRB assistant director have prepared her well to take on the wide-ranging duties of the director,” says Lynn Haynes, director of the Office of Research Compliance. “Gretchen will continue to support our progress toward a more efficient and effective IRB.”

And it’s no small task.

In March alone, the IRB offices received initial review applications for 150 new studies, change of protocol applications for 233 previously approved studies, and 109 annual renewal applications. While the number of applications ebbs and flows during the year, it’s a snapshot of the workload facing the human research protection program.

The IRB Efficiency Project has also led to a new IRB website, which houses all IRB resources including a toolkit, investigator manual, reliance manual, new protocol templates, and other materials to support the research community.

“We have never had an investigator manual before, and we hope it provides much needed clarity in regulatory requirements, process and workflow,” Connor says. “The checklists used by reviewers also are now available to study teams to assist them in understanding what the reviewers and IRB are looking for when reviewing a study.”

Another component of the IRB Efficiency Project includes updates to ARROW, an online workflow system used at UW–Madison to review and track applications for research oversight pertaining to human and animal research subjects, stem cell research and biological safety. An ARROW update in March included a new protocol-based application for human-subjects research studies.

“We are facilitators of a compliance process that can be complicated,” Anding says. “We need to be able to communicate regulatory information in a way that can be translated to researchers and IRB members. We also need to provide avenues and resources to make sure that research is as safe and effective as possible.”

And, she adds: “It’s fun. It’s an interesting adventure — maybe one that I had not dreamed of doing as a little girl, but one that I have been excited to do throughout my entire career.”