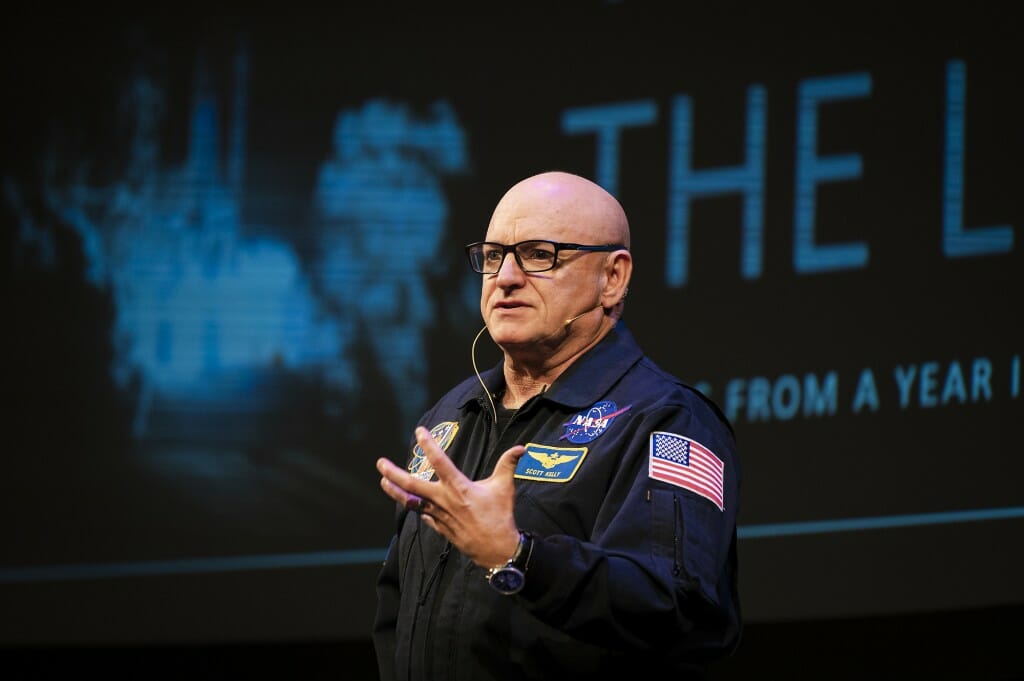 Scott Kelly, a former NASA astronaut and retired United States Navy Captain, speaks from the stage to the near-capacity crowd during a public lecture and discussion event held in Shannon Hall inside the Memorial Union at the University of Wisconsin–Madison on Oct. 4. Colton Mansavage

One hundred forty-three million miles, 520 days and four flights — that’s what it took for NASA’s Scott Kelly to set a new record in 2016 for most days spent in space by an American astronaut during his final flight when he spent a year on the International Space Station.

Kelly has since retired from NASA, and these days he travels more modest distances, crisscrossing the country to inspire young scientists.

Kelly detailed his life story and his year in space for a University of Wisconsin–Madison audience recently as a part of the Wisconsin Union Directorate’s Distinguished Lecture Series.

“If we can dream it, we can do it,” Kelly said to a packed house at Memorial Union. “The sky is definitely not the limit.” 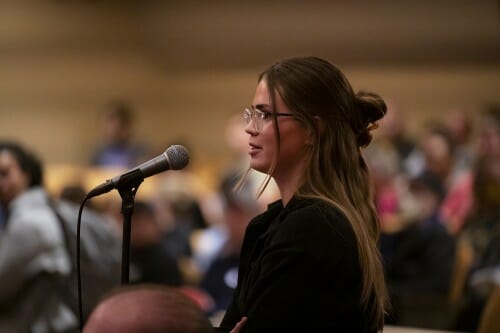 Kelly answered questions from audience members, including Rachel Rauth, a fifth year kinesiology student, during a the lecture. Colton Mansavage

Despite his many honorable distinctions as a U.S. Navy pilot and astronaut, Kelly stressed that his life has not been a nonstop success story. He spoke candidly about his academic struggles growing up and the substantial effort he put into his naval flight training. Kelly described his mindset going into every new opportunity, knowing the possibility of failure. Without that perspective, he shared, he would never have gone to space, much less broken spaceflight records. Reflecting on his own determination to persevere through uncomfortable challenges, Kelly encouraged the audience to “take risks, be willing to make mistakes and even be willing to fail.” In his experience, the willingness to risk failure is what distinguish those who are truly successful. 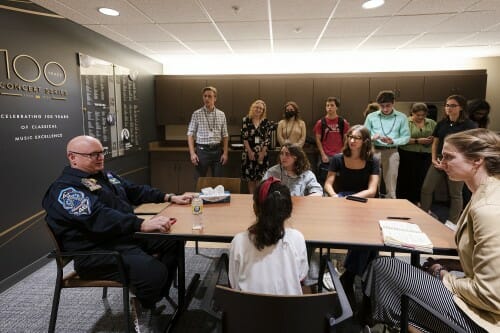 Kelly meets with a group of student reporters following the lecture. Colton Mansavage

Extended time in zero-gravity has drastic effects on the body, and indeed, enduring prolonged exposure to microgravity and the radiation of space was a central component of Kelly’s mission. He was specifically chosen because his twin brother Mark also worked at NASA. As twins, Mark and Scott have nearly identical genetics, so when Scott went up to space, Mark stayed behind and acted as a control to see exactly how the year in space affected Scott. By comparing the two brothers, scientists sought to learn how the body changes after prolonged space travel, in preparation for one day sending astronauts to Mars.

The genetic results were quite surprising. Normally as humans age, the ends of their chromosomes, called telomeres, shrink. Scientists hypothesized that given his lengthy stay on the International Space Station, Scott’s telomeres would shorten more compared to Mark’s.

Despite predictions, Scott’s telomeres elongated by an average of 14.5%. However, the telomeres reverted to shorter lengths almost immediately after he returned to earth. NASA researchers are still seeking an explanation for this surprise finding. Additionally, Kelly noted that “7% of my gene expression changed.”

The effects on his overall physical condition were also profound, if less surprising. “It was really hard to just stand up. My joints and muscles were really stiff,” he said. “You know, had I not been in space for a year, I probably would have gone to the emergency room. That’s how bad I felt. I was nauseous. I was tired. I was dizzy.”

A lot more work has to be done before humans embark for Mars, but Kelly has paved the way for this research to continue.

While he takes pride in doing his part to send humans to a new planet, Kelly made a point to emphasize the need for environmentalism on Earth.

“We have to take care of this planet. I’m a big believer in going to Mars, but I hate to tell you, we’re not all walking to Mars, and Mars is not the lifeboat for planet Earth,” Kelly said. “No matter how bad we screw this place up. It’s always gonna be easier to live here.”

A new perspective on his home planet may be the most profound, lasting impact of his mission.

“When you look at planet earth from space, you don’t see political borders, and you realize it’s not that big of a planet,” Kelly said. “We’re all in this thing called humanity together and big problems take cooperation to solve.”