Moving fast to study nitrate in the Mississippi, algae in Mendota Luke Loken, a graduate student in the UW–Madison Center for Limnology, drives a boat around Lake Mendota as he uses a stern-mounted sensor — a device known as Fast Limnological Automated Measurement (FLAMe) — to collect real-time water sample data.

The Mississippi River has long had its explorers. From de Soto to Marquette, Lewis and Clark to Clemens, the fourth largest river in the world has for centuries inspired enchantment.

Today, Luke Loken, a graduate student at the University of Wisconsin–Madison Center for Limnology (CFL), and John Crawford, a CFL graduate, are Mississippi River explorers of a more modern sort. They have embarked on a journey to learn more about the chemistry of its waters, using technology they invented.

They call their technology FLAMe, for Fast Limnology Automated Measurements platform, a mobile sensor system they attach to a boat and use to gather data from the water while on the move. They began in the Mississippi in July 2014, conducting six seasonal surveys of a 20-mile stretch of river near La Crosse. This August, Loken and Crawford charted a continuous course from Minneapolis to Kentucky, taking measurements along the way.

“We want to understand how the chemistry of the river changes as we move along its length,” Loken says, “and we want to know how large rivers process carbon and nitrogen.” Loken checks the control box on the FLAMe.

He and Crawford, who is now a postdoctoral researcher at the U.S. Geological Survey National Research Program, want to study how the river contributes to the storage of carbon and its release back into the atmosphere. They want to know where algae bloom-promoting nitrate — from a pollutant found in manure and chemical fertilizers — is running into the river, and where it’s being soaked back up. And they want to show what their new technology can do.

By “flaming” bodies of water, Loken and his colleagues are hoping to answer questions about river and lake behavior, water quality, the variability of freshwater systems and more, lending a hand to land managers and policymakers tasked with making informed decisions. And they want to help inform the public.

Over the course of two weeks on the Mississippi this summer, Loken and Crawford gathered a quarter of a million data points using FLAMe. The system pulls in surface water while the boat moves and circulates it through a collection of sensors, allowing the researchers to measure everything from nitrate to carbon dioxide and temperature, every second of the way. That data feeds into a computer and within 20 minutes of returning to shore, can be used to tell a story about the chemistry of a waterway. On this trip, part of that story was nitrate. Loken and other researchers have adapted the FLAMe acronym to nickname the activity “to flame” or “flaming” the lake.

Nitrate accumulates in freshwater when nitrogen-rich agricultural runoff makes its way into lakes, rivers and streams. It can cause algal blooms that block light to deeper water and scum up the surface, kill fish and beneficial plants, and present a hazard to swimmers. It can also contaminate drinking water and impact human health.

“We measured the Mississippi River and its major tributaries in order to identify the sources of nitrogen to the river and areas that may serve as nitrogen sinks,” says Loken, a member of limnology and zoology Professor Emily Stanley‘s lab.

With the data they collected cruising the Upper Mississippi, Loken and Crawford generated “heat maps” of the stretch they traveled, where it’s easy to see nitrate levels rise in agricultural regions and fall back as contaminated waters sieve through adjacent backwater lakes, wetlands and large impoundments, like Lake Pepin, a “giant natural lake in the middle of the river,” Loken says. Lake Pepin is about 60 miles downriver from St. Paul.

“You see water clarity improve and nitrate decline. They’re cleaning the water, acting like giant kidneys,” Loken says. “Maps like this are the first step. After seeing the data, we can start to unravel the ecology of the river.”

FLAMe offers researchers the ability to study freshwater in ways they never have before — to study the breathing and turnover and changes of this natural resource as they occur, over space and over time, all while traveling quickly over a body of water.

“Lakes and rivers are active places for carbon cycling and greenhouse gas emissions,” says Loken. “With climate change, we want to know where the carbon is and where it’s entering the atmosphere. We hope to better understand the role of freshwaters in the global carbon cycle and with FLAMe, we can identify ‘hotspots’ in the system and follow up with more extensive studies in these particular areas.”

At Trout Lake Station in Boulder Junction, Loken, another CFL graduate student in Stanley’s lab, Vince Butitta, and a team of undergraduates have also spent time flaming area lakes to learn how variable they are and to better understand differences and similarities between small lakes (with lots of shoreline) and larger ones.

At the University of Notre Dame Environmental Research Center, which borders Wisconsin and Upper Michigan (not far from Trout Lake), CFL Director Steve Carpenter and collaborators from the University of Virginia are studying early warning signs of algae blooms in experimental lakes. Can they see, before it happens, a lake on the brink of an algae bloom? To find out, Butitta flamed the study lakes this summer, capturing changes over time and space.

A heat map of nitrate levels along the Mississippi River. Nitrate concentrations increase downstream from rivers that drain agricultural areas and decrease as the waters sieve through natural backwaters and impoundment areas, like Pool 4/Lake Pepin, and the nitrate settles out.

“He will hopefully pick up the signal of lakes changing states,” Loken says. “We are testing whether we can detect the lakes’ impending doom, whether it will or will not shift based on the spatial pattern of a set of variables.”

Back in Madison, Loken untied a small boat from the dock in the boathouse beneath the Arthur D. Hasler Laboratory of Limnology. He turned on the engine and backed the boat, named The Procaryote, onto Lake Mendota.

It was cool on the water, and windy, and the sun was taking a break behind gray skies. Loken steered toward the lake’s center before killing the engine. He turned to the large, rugged black box in the back of the boat and unlatched its lid, revealing the inner workings of FLAMe.

Lake Mendota is perhaps one of the best-studied lakes in the world — the place where the study of freshwater began. It was on its shores that the idea for FLAMe was born and here that the graduate students tested the new technology.

The FLAMe prototype was designed in 2010 by former CFL student Luke Winslow. Loken and Crawford improved upon it in 2014, designing the system in use today. The UW–Madison Physical Sciences Lab (PSL) helped them improve FLAMe’s water intake mechanism and with PSL, Loken says they are now working to achieve the capacity to receive live data onboard the boat.

“Maps like this are the first step. After seeing the data, we can start to unravel the ecology of the river.”

Mendota can be flamed in about two hours, using a GPS-guided grid, Loken explains, or they can use the system to study small areas of interest — to look for, perhaps, the presence of toxic algal blooms.

“It could be a tool to inform the public about how they recreate, that they may want to spend more time fishing rather than swimming at a particular location,” Loken says. “It matters for beaches and algal blooms. If we rely on a single measurement from some point on the lake, we may miss what’s happening along the shoreline.”

Water chemistry has traditionally been measured by taking samples from single points on a body of water, like at the research buoy on Lake Mendota, which feeds CFL scientists a bevy of data at any given moment. But single measurements, whether in space or in time, cannot tell scientists everything they may want to know, and water conditions can change quickly. A host of environmental changes, including wind, can alter conditions in any given space on the lake at any given time.

Loken and his colleagues want to tell a bigger story, and a better story, to use FLAMe to gather not just snapshots of a given time or place on a lake or river or stream, but to create complete timelines — even time-lapse movies — of living bodies of water.

“What is missing if we’re measuring at only a single location?” Loken says from Lake Mendota. “We are starting to identify zones in the lake that are behaving fundamentally differently than other parts of the lake.”

Like at Cherokee Marsh, which Loken has learned is vastly different from other parts of the lake. The Yahara River feeds in here and algae flourish, which FLAMe detects by measuring levels of chlorophyll — the compound algae use to convert sunlight into food — and carbon dioxide, which the algae consume.

Loken has also used FLAMe to capture the seasonal change of a lake like Mendota, as in the fall, when cooler water at the surface begins to stir things up. 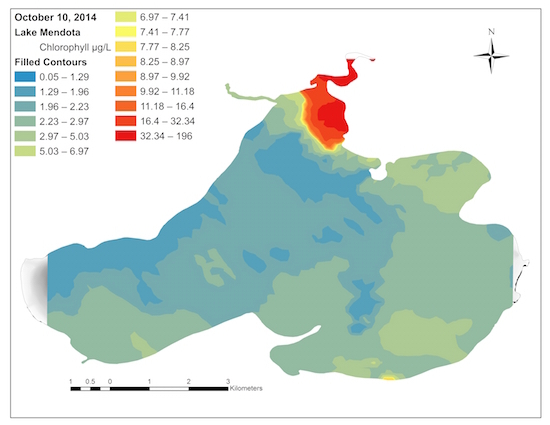 Chlorophyll levels in Lake Mendota on Oct. 10, 2014. Chlorophyll concentration is a way to measure levels of the algae responsible for toxic blooms. On Oct. 10, except for the hotspot (high concentration) where the Yahara River flows into the lake, most of Mendota registered low chlorophyll. 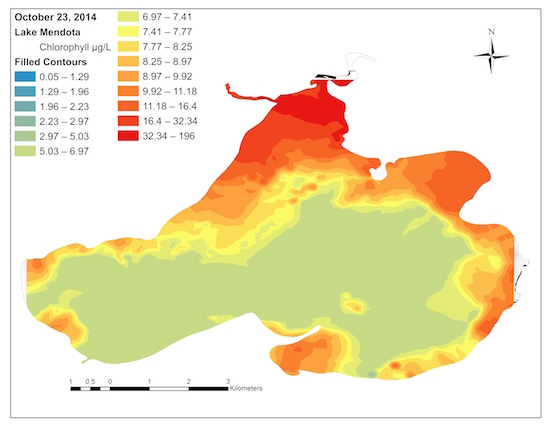 Chlorophyll levels in Lake Mendota on Oct. 23, 2014. Just 10 days after measurements showed low chlorophyll levels across most of the lake, the lake experienced an algae bloom as deep water began to mix with seasonally cooling surface waters, churning up the nutrients on which blue green algae rely. It is a snapshot of a major lake process occurring.

Currently, FLAMe is limited only by the availability and cost of the sensors on the market, which can run between $5,000 and $100,000 or more, though some of the basic instruments cost less.

It owes its potential to the researchers, like Loken, who are inspired to use it.

Loken began his graduate career at UW–Madison in 2012 and soon found himself part of a venerable team of students, postdocs and faculty. He knows lakes well, having grown up in Minnesota, and before he arrived in Madison, he conducted research in the arctic and worked as a backcountry aquatic ecologist in Olympic National Park.

On Lake Mendota, Loken steered over to University Bay, pointing out how quickly the character of the lake changes. As he drove, water burst up and outward from the back out of the mounted system, like flames from the back of the boat. Soon, Loken stopped at the research buoy near Mendota’s center.

“Really, we just built this to go fast in the boat,” he says about FLAMe, with a smile. “It’s fun.”