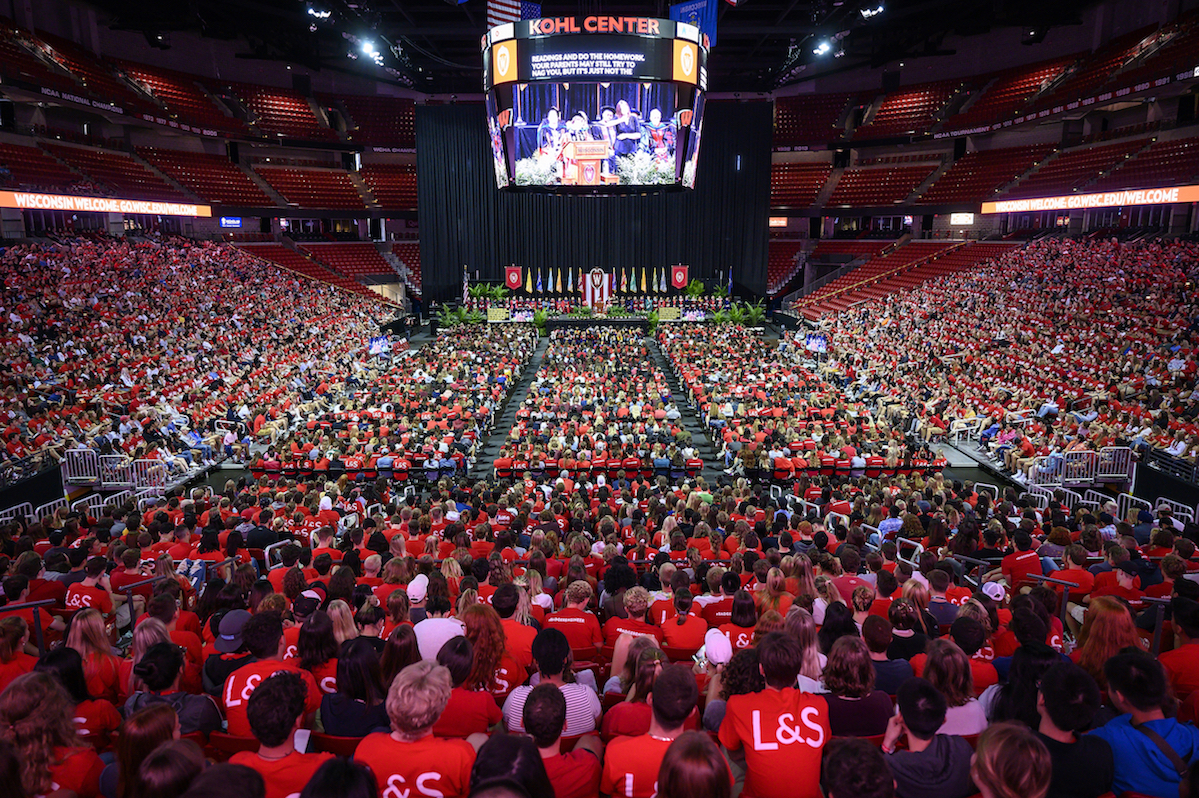 The class of 2023 attended the Chancellor’s Convocation earlier this month at the Kohl Center. Photo: Jeff Miller

This fall’s class of newly arrived freshmen at the University of Wisconsin–Madison continues the institution’s strong commitment to access and affordability for Wisconsin families.

The university enrolled 7,550 freshmen this year, up from 6,862 last year. These students were selected from a record 43,921 applicants, up 3 percent over last year.

“We’re seeing a very high demand for a UW–Madison education from students across the state, nation and globe,” says Provost Karl Scholz. “Our promise to these talented and creative students is a world-class experience at a top-ranked public institution that remains one of the best values in the country.”

Wisconsin focus: The university pledged in 2015 that, even in a time of static or declining high school enrollment in the state, upcoming freshman classes would include at least 3,600 Wisconsin residents.

“We are the state’s flagship university, and as such, the makeup of our freshman class reflects both our appeal to home-state students and our vow to attract and enroll as many of these high-achieving students as we can,” says Steve Hahn, vice provost for enrollment management. “This is a robust and well-prepared class of Wisconsinites, and we’re thrilled to welcome these students to campus.”

Access: The groundbreaking Bucky’s Tuition Promise and Badger Promise programs continue to make an education at UW–Madison affordable for more and more of these Wisconsin students.

Diversity: The freshman class includes 825 underrepresented students of color, defined as domestic students who identify as African-American, Hispanic/Latino(a), American Indian or Southeast Asian-American. This number is up 10 percent, from 748 the prior year.

Total enrollment for fall 2019 at UW–Madison grew to 45,319, up from 44,411 last year. The campus welcomed 889 new transfer students, compared to 1,141 last fall. Sixty-four percent of all undergraduates are Wisconsin residents or enrollees through the Minnesota reciprocity program, from whom the university receives in-state tuition amounts.

The enrollment numbers come from the university’s official census, taken each semester on the 10th day of classes.