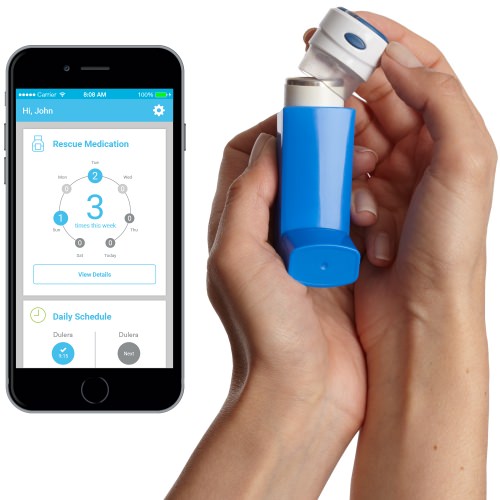 Propeller Health’s device attaches to an inhaler and connects wirelessly to a smartphone, helping users and doctors understand what the use of rescue medicine says about asthma triggers. Propeller Health, LLC

What do you get by marrying an asthma inhaler to a wireless monitor and a smartphone app? Plenty, says David Van Sickle, a medical anthropologist who specializes in respiratory disease.

In 2011, Van Sickle created a spinoff called Propeller Health while he was working on respiratory disease prevention at UW Health in Madison.

Van Sickle arrived at UW–Madison in 2006 with a grant to pursue what he calls “high-risk, high-reward technologies to better understand how we could monitor and intervene to help people and communities better manage the burden of asthma and COPD,” (chronic obstructive pulmonary disease, or emphysema).

In the United States, he adds, the direct and indirect costs of asthma are estimated at $56 billion.

Both asthma and COPD “are characterized by a persistent gap in what we should be able to achieve and what we have accomplished,” Van Sickle says. “We have a lot of effective therapies that are not being used, either at all, or to best effect.” 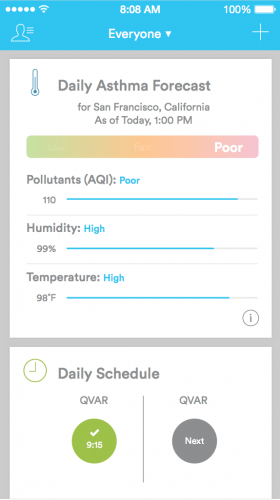 Propeller Health makes an add-on device for inhalers that communicates with a smartphone that records the use of routine preventative medicines and “rescue” medications intended to open constricted airways. This gives the patient useful information on their smartphone or website about whether routine meds are being taken as scheduled, and it shows them patterns that trigger the need for rescue medicines.

“Over time, we learn when and where you need your rescue inhaler, and so we’re able to teach people something they may not understand: ‘When you are wheezing, it’s often high humidity and you are at work.’ With this information, you can take steps to avoid those exposures.”

To date, Propeller has raised $45.5 million in investment funding. It has 65 full-time employees, including about 40 in Madison and the rest in San Francisco. About one-quarter of the employees are UW–Madison alumni, largely from the Department of Computer Sciences and the Wisconsin School of Business. About 10,000 people are using the system in the United States, says Van Sickle, and the company is expanding into Canada and Europe.

Generally, the Propeller Health system is purchased by health plans or provider systems, which make it available to patients, often through a primary care doctor. “Generally, these organizations are at economic risk for the patient outcome,” Van Sickle says. “If you are a health insurance company, you are frustrated at having to pay for asthma attacks and emergency room visits that are preventable with current therapy.”

Ironically, Propeller is succeeding by doing something that can be forgotten in the rush to create better treatments. The company is “not trying to invent radical new therapies, but to make better use of the tools that we already know will work to help get the condition under control,” Van Sickle says, “so people are less impaired and have less risk of flare-ups because they are managing the underlying disease and thus preventing symptoms. By reminding and encouraging people to use the daily therapies, our research shows that this has a big impact on driving down the frequency of exacerbations and use of rescue medicines.” 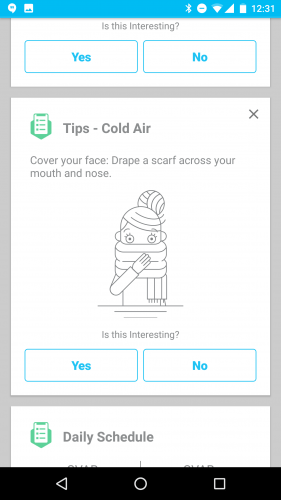 A little advice can go a long way toward reducing the severity of asthma.

Propeller has two other related roles. Van Sickle, who trained as a medical anthropologist, came to UW–Madison from the Centers for Disease Control and Prevention, where he specialized in the epidemiology of disease. With its ability to monitor the use of both daily preventive and rescue medications, Propeller “can contribute information to clinical trials of all shapes and sizes,” he says.

A summary screen shows all of a particular physician’s patients at once, “so you can quickly identify patients who would benefit from a phone call, an adjustment to medication or an exam,” Van Sickle says.

The same system can be used to monitor COPD, helping patients avoid situations — like polluted air — that further impair their lung function, Van Sickle says. “COPD is heading toward being a leading killer around the world; it’s one of the few conditions where the trend is going in the wrong direction.”

Even amid ongoing uncertainty about the future of health insurance, Van Sickle sees a role for a system that optimizes the use of resources. “From our perspective, regardless of what happens with health care, as long as we can deliver better outcomes and lower costs, we have a compelling business model.

“Asthma causes about 4,000 deaths per year in the United States, and the consensus is that virtually every one is preventable with appropriate treatment,” Van Sickle says. “Yet there are hundreds of thousands of hospitalizations, and millions of ER visits. These are treatment failures that should never occur.”