“Glass seems to work pretty well,” says glass expert Mark Ediger, gesturing at windows overlooking the UW–Madison power plant on Dayton Street. They are the only obvious bit of glass in his office, and so the discussion of 21st century glass entails repeated references toward windows that, ironically, are exactly the kind of glass that doesn’t much interest him.

“If you ask an ordinary person, ‘What is glass?’ they will point to a window, but glass is a much broader category of materials,” says Ediger, a UW–Madison professor of chemistry. “A plastic ruler is a polymer glass. The fuselage of the Boeing 787 aircraft is a polymer glass reinforced with carbon fiber. And the display of a Samsung smartphone is made of OLEDs (organic light-emitting diodes) that utilize organic glasses.” 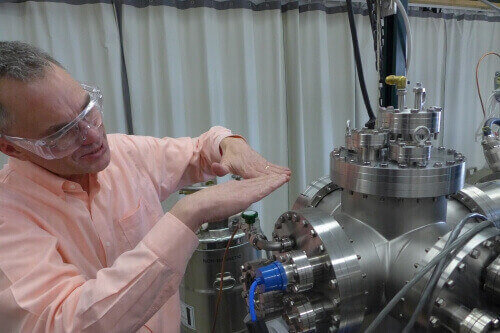 For 30 years Ediger has been exploring the fundamental properties of organic glass while inventing ways to control the placement of molecules and slow the degradation of a substance that does not have the rigidity of a crystal.

Scientifically, glass is a non-crystalline, solid material built of molecules or atoms packed together in countless different arrangements.  Crystals only tolerate one packing arrangement between neighbors.

As Ediger positions himself in the window’s sunlight, he explains that the science of “silicate” glass — the stuff of light bulbs, beer bottles and windows and made largely from sand — is already highly advanced.

Many other glasses, however, exist at the cutting edge of modern science. The glasses that interest Ediger, for example, are made from organic molecules — compounds based on carbon, the element at the heart of the most diverse assemblage of molecules in the universe.

Glasses are more versatile than crystals, Ediger says. “For any given organic molecule, you only have a few crystal structures to pick from; you are out of luck if one of them does not have the properties you want. But molecules in glass are really flexible about their local environment and who they are willing to hang out with, so for organic molecules, there are an infinite number of glasses we can make. Some glasses might, for example, resist water uptake or be exceptionally hard or resist degradation by light.” 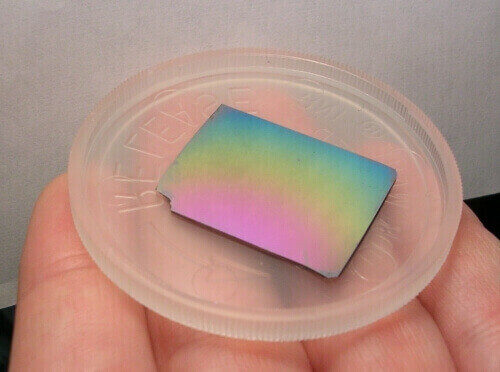 This sample of organic glass, made in Ediger’s lab, has been “pre-aged,” meaning it deforms more slowly than most glasses. Photo: Mark Ediger

As in most glasses, the light-making molecules in an OLED are oriented more or less at random, “but you want those molecules positioned so the light is aimed toward your eye,” he says. Advanced production techniques to control the orientation of OLED molecules would increase efficiency and extend cellphone battery life. The slight but continual movement of molecules in glass will eventually degrade performance in the hundred-million-odd OLEDs made to illuminate cellphone displays every year; more stable glasses would extend the display lifetime.

Ediger acknowledges that this sounds like taming a rebellious group of molecules. “If we tame them completely, we get a crystal, which we don’t want, but we have found a middle way to produce materials that are in many respects better than traditional glass, but are not crystals.”

Crystals have their uses — the silicon crystal is the basis for computer chips, for example — but glass is better if you want to see through a window or use light for digital communication. “An optical fiber has to be able to carry a signal what — 60 miles — without being scattered by the boundaries between crystals,” Ediger says. “There’s no way you could do that with crystals.”

In 2007, in the journal Science, Ediger and colleagues published a key advance in the quest for a middle ground between the rigid repetition of a crystal and the amorphous anarchy of a glass. The article described organic glass made by depositing a vapor of organic molecules on a cold plate in a vacuum chamber. “Initially we did not know what we were making, we just knew that it was bizarre, unexpected,” he says. 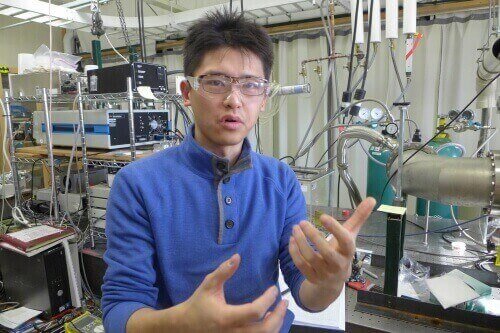 The new material did not behave as expected under neutron irradiation. “We raised the temperature to something we figured would start the molecules moving, but we had to raise the temperature another 25 degrees (Celsius) before the molecules started to move. It turned out we had made a form of glass in which the molecules were so much better packed that they did not move until we reached a much higher temperature.”

Ediger had stumbled upon a way to “pre-age” glass and sidestep the seemingly inevitable degradation caused by slight atomic rearrangements over time. “Our contribution was showing that there is this interesting space between traditional glass and crystals,” he says. “You are putting order in, but if you put in too much order, it becomes a crystal, and you have gone too far.”

Ediger eventually figured out that the cold-plate deposition process allowed the molecules to settle into a “comfortable” position, “and then get buried by another molecule” that locked them in place.

The technique is comparable to the instant production of an ancient vintage of wine, he explains. “These materials are effectively thousands or millions of years old. They have already had a chance to find a packing arrangement they are pretty happy with, and will stay there for a very long time.”

Ediger, a Kansas native, says he started on his quest to instill some rhyme and reason in an amorphous material as a graduate student at Stanford. “Glass was the control for an experiment I was doing. Glass was supposed to be boring and stable, but I was surprised at how much the molecules were rattling around.” 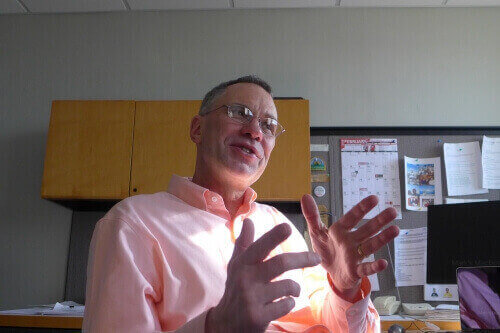 “If you ask an ordinary person, ‘What is glass?’ they will point to a window, but glass is a much broader category of materials,” says Ediger. Photo: David Tenenbaum

Ediger’s fascination with glass grew when Pat Hyde, his first UW–Madison graduate student, “pointed out that we could do experiments to understand glass in a new way. In one way or another, that conversation has been responsible for at least half of what I’ve done at UW–Madison. At a great university you have bright, interesting young people who have good ideas, and they can move science in a direction it would not otherwise go.”

Ediger describes himself as “a practical person,” and explains that his theoretical goal is understanding the rules that govern the formation and inevitable transformation of glass over time.

The cross-pollination between theory and practicalities continues in Ediger’s lab, as graduate student Yue Qiu uses vacuum deposition to prepare a new set of compounds that could be useful for OLEDs. “Yue’s work answers a fundamental question and also can be useful in practice,” Ediger says. “OLEDs deteriorate over time, so cellphone displays get dimmer, and Yue’s work might eliminate that.”

Qiu “is also asking an important fundamental question that applies very broadly to many aspects of glass technology,” Ediger says. “How do you pack the molecules in a glass so tightly that light cannot cause the molecules to rearrange? You could improve cellphone displays by trial and error, but that would be a long process. If we can identify the principles, we could cut years from that.”