In a study published this week in the Proceedings of the National Academy of Sciences, a University of Wisconsin–Madison research team pinpoints how immune abnormalities beneath the retina result in macular degeneration, a common condition that often causes blindness.

Aparna Lakkaraju, an assistant professor of ophthalmology and visual sciences, focused on two protective mechanisms that are compromised during the gradual onset of macular degeneration, which degrades and can destroy the central vision needed to read and recognize faces. 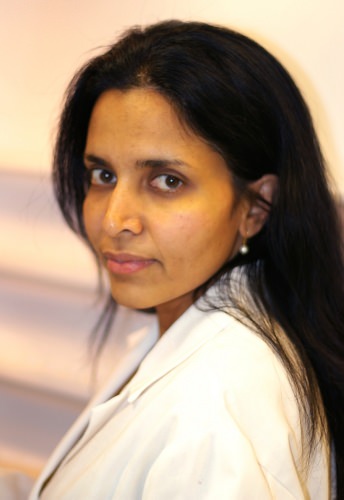 In tests in a mouse model of macular degeneration, drugs that are already on the market prevented damage to the cells that sustain the light-sensitive cells in the eyes.

“These studies raise the possibility of treatments that could slow or prevent macular degeneration,” says Lakkaraju.

Macular degeneration destroys central vision in about 2 million Americans, mainly among the elderly, and is largely untreatable.

Although macular degeneration eventually damages or kills the light-sensitive rods and cones, Lakkaraju explains that it starts with injury to the retinal pigment epithelium (RPE). The RPE, a single layer of cells beneath the rods and cones at the back of the eye, performs many functions essential for healthy vision. The damage starts with a disturbance of immune proteins called complement, which normally kill disease-causing organisms by boring holes in their cell membranes.

“The light-detecting cells in the retina are totally dependent on the RPE for survival,” says Lakkaraju, “but the RPE cells are not replaced through the lifespan. So we asked, ‘What are the innate protective mechanisms that keep the RPE healthy, and how do they go awry in macular degeneration?'”

In a study performed with colleagues Li Xuan Tan and Kimberly Toops, Lakkaraju focused on two protective mechanisms: the protein CD59, which regulates complement activity when attached to the outside of RPE cells; and lysosomes, spherical structures that plug pores created by the complement attack (a function that Lakkaraju’s team first detected in the RPE).

Together, they offer an in-depth defense, Lakkaraju says.

“CD59 prevents the final step of attack that forms the pore,” Lakkaraju says. “Once a pore forms, the cell can move a lysosome to close it.”

“These studies raise the possibility of treatments that could slow or prevent macular degeneration.”

If the complement attack is not defeated, the opening in the RPE cell membrane allows the entry of calcium ions, which spark a long-term, low-grade inflammation that inhibits both protective mechanisms, creating a vicious cycle of destruction.

The inflammation in the RPE damages mitochondria, structures that process energy inside all cells. This could eventually lead to a decline or death of the photoreceptor cells, once they are deprived of their essential housekeepers. The result is the loss of central, high-resolution vision.

Lakkaraju pursued her research in RPE cells isolated from pig eyes, and in mice that lack a protein — a deficiency that causes an inherited form of macular degeneration called Stargardt disease.

Crucially, her study identified an enzyme that is activated by excess cholesterol in the RPE, which neutralizes both protective mechanisms, and found that drugs used to treat depression neutralized that enzyme and restored the protection — and the health of RPE cells — in the mouse model.

“I am realistic, but hopeful, that better knowledge of this disease process could be the key.”

Epidemiological studies by Ronald and Barbara Klein, also at the UW–Madison Department of Ophthalmology and Visual Sciences in the UW School of Medicine and Public Health, have linked long-term use of some of the same drugs with a decreased susceptibility to macular degeneration.

The drugs that helped restore protections in the RPE were chosen for their ability to remove excess cholesterol or inhibit aSMase, an enzyme involved in the toxic process, Lakkaraju says.

“There are several FDA-approved drugs that inhibit aSMase. We found that the antidepressant desipramine, administered to mice in their drinking water, restored CD59 on the cell surface, decreased reactive oxygen species, and prevented mitochondrial fragmentation.

“My lab is interested in the earliest stages of macular degeneration, because we cannot reverse the loss of RPE and photoreceptors,” Lakkaraju says. A patent application for the idea of preventing macular degeneration by blocking aSMase has been filed by the Wisconsin Alumni Research Foundation.

Given the likely increase in macular degeneration among an aging population, and the current lack of alternatives, “we hope a pharmaceutical company will license this process and start the necessary preclinical and clinical trials,” Lakkaraju says. “The epidemiological data are there, and now we have fairly convincing mouse data. The safety profiles of these drugs have been documented for decades. There is certainly no guarantee of success, but we need a way to prevent macular degeneration. I am realistic, but hopeful, that better knowledge of this disease process could be the key.”

The research was funded by the National Institutes of Health (grants #R01EY023299 and #P30EY016665), Research to Prevent Blindness, Retina Research Foundation and other sources.