After nearly nine years, Chancellor Rebecca Blank will leave UW–Madison at the end of the 2021-22 academic year to assume the presidency of Northwestern University. Here is a look back, through the lenses of University Communications photographers, at Chancellor Blank’s time on campus. 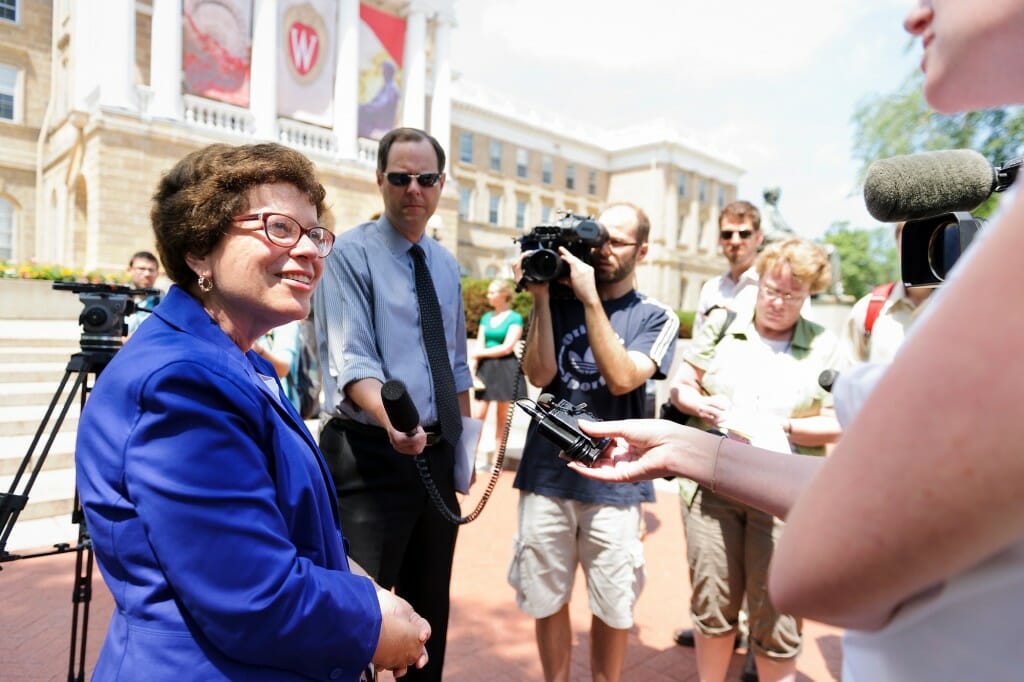 1 On July 22, 2013 — her first day on the job — Blank stepped outside her Bascom Hall office to meet with reporters after greeting a group of prospective students and their families who were touring campus. Photo by: Jeff Miller 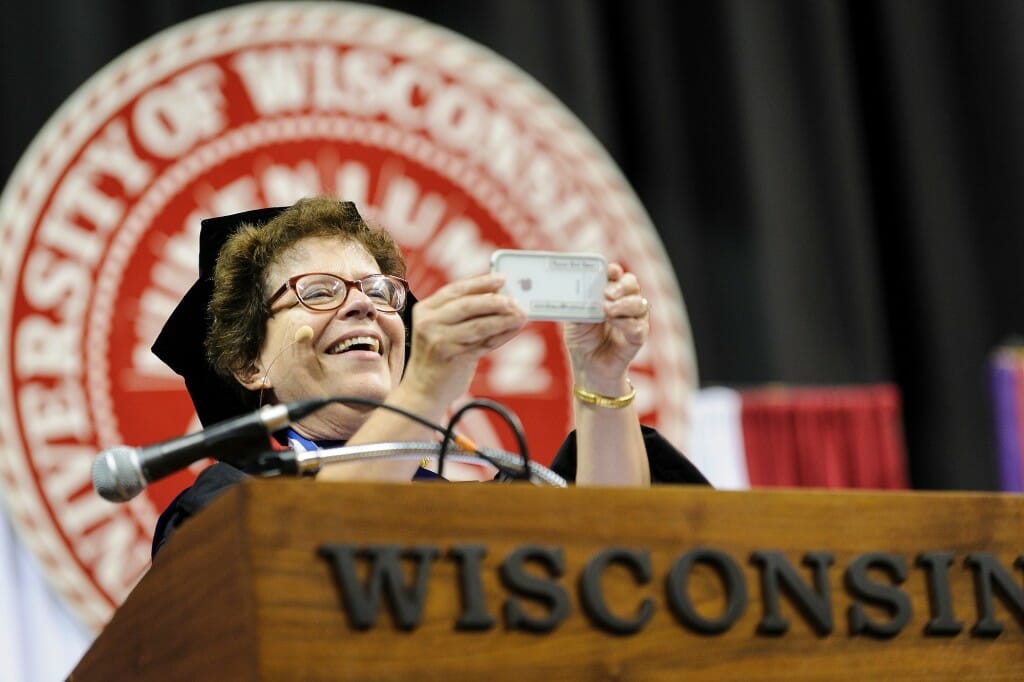 2 Her first major public event here — one that she recorded for posterity on her cellphone camera — was the Chancellor's Convocation for new students at the Kohl Center on Aug. 30, 2013. Photo by: Jeff Miller 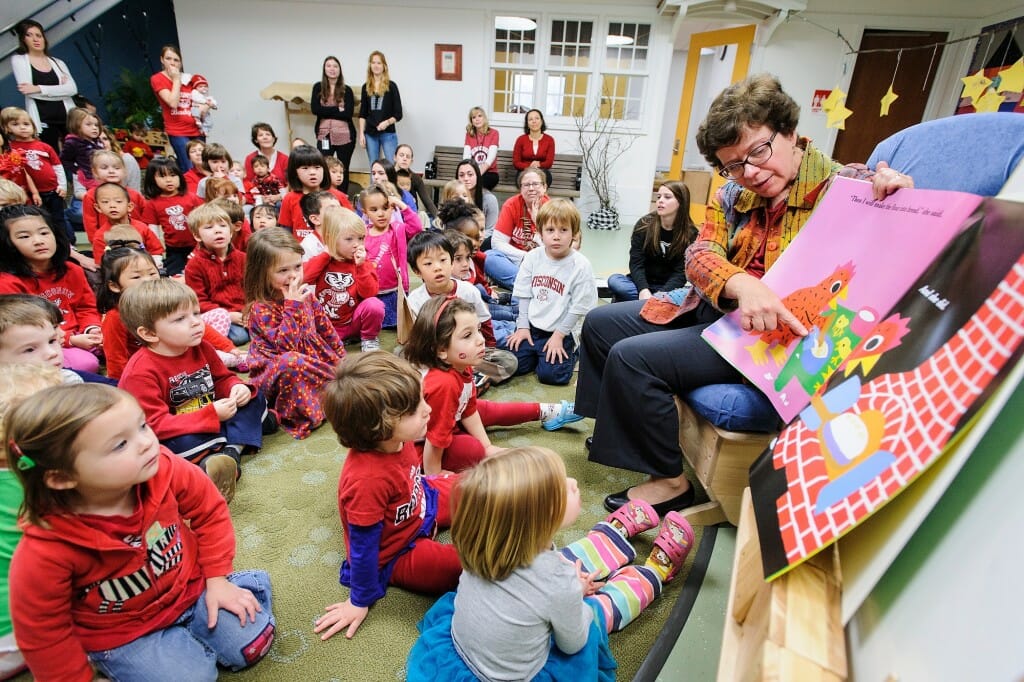 3 In a Dec. 4, 2013, guest appearance at the School of Human Ecology Preschool Laboratory in Nancy Nicholas Hall, Blank read from "The Little Red Hen" as part of a program promoting children's books that emphasize kindness and compassion. Photo by: Jeff Miller 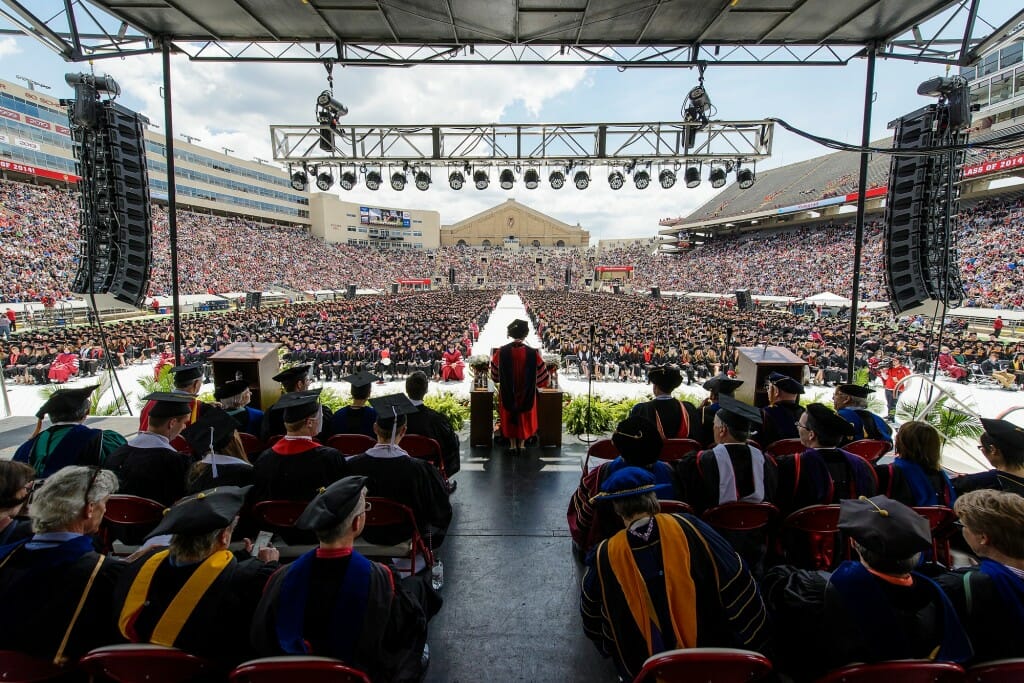 4 Blank addressed graduates and their families at the first outdoor spring commencement in more than two decades on May 17, 2014, at Camp Randall Stadium. Photo by: Bryce Richter 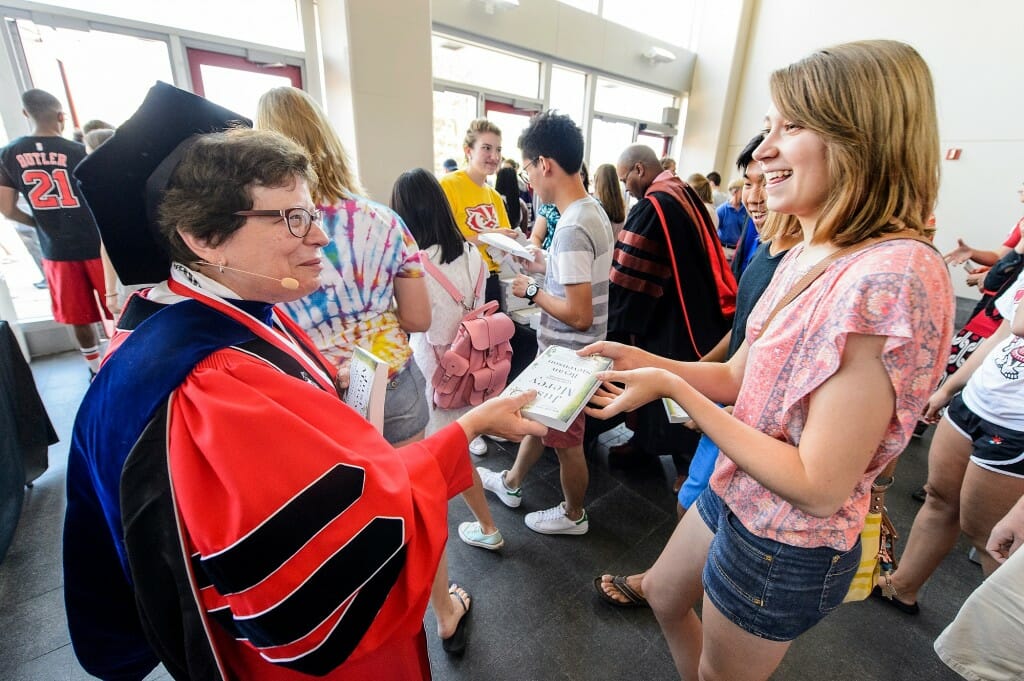 5 "Just Mercy" by Bryan Stevenson was the chancellor's 2015-16 selection for Go Big Read, the university's common-reading program. She distributed free copies of the book to students after the Chancellor's Convocation at the Kohl Center on Sept. 1, 2015. Photo by: Bryce Richter 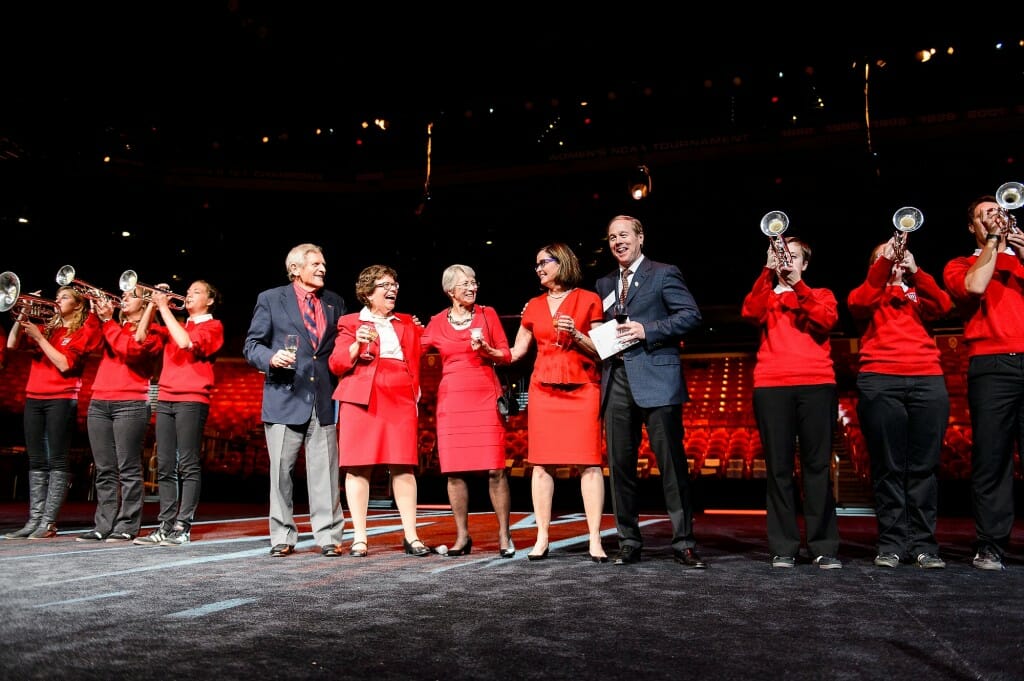 6 Members of the UW Marching Band flank John Morgridge, Chancellor Blank, Tashia Morgridge, and Mary Sue and Michael Shannon (left to right) at the official launch of a major capital campaign at the Kohl Center on Oct. 15, 2015. "All Ways Forward" would ultimately far exceed its initial fundraising goal. Photo by: Jeff Miller 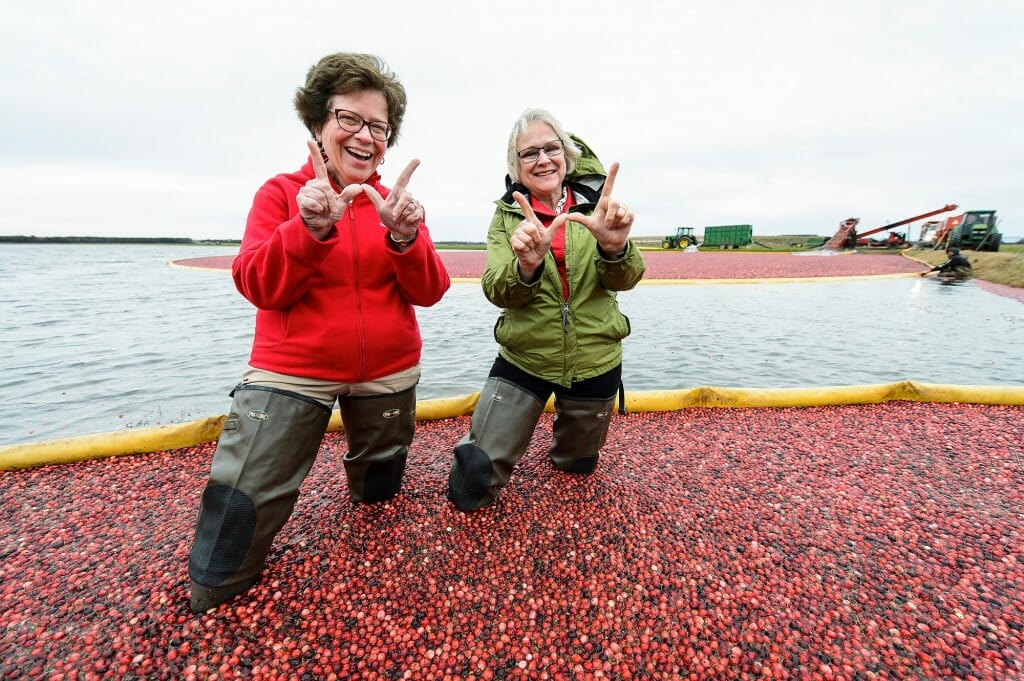 7 Blank and Kate VandenBosch, dean of the College of Agricultural and Life Sciences, waded into a flooded cranberry marsh in Necedah, Wis., on Oct. 27, 2015. Several profitable varieties bred at UW–Madison have helped make Cranberry Creek Cranberries an industry leader. Photo by: Jeff Miller 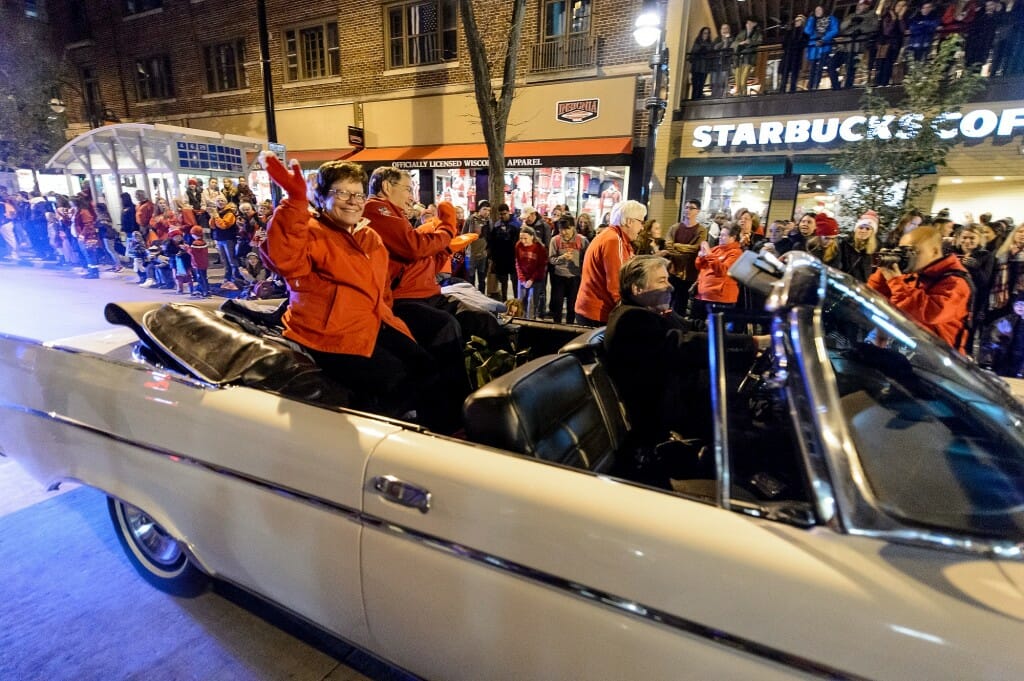 8 UW-Madison Chancellor Rebecca Blank and her husband, Hanns Kuttner, wave to the crowd as thousands of spectators line State Street during the University of Wisconsin-Madison's Homecoming Parade on Nov. 11, 2016. The annual parade is one of many Homecoming week activities sponsored by the Wisconsin Alumni Association (WAA). (Photo by Bryce Richter / UW-Madison) Photo by: Bryce Richter 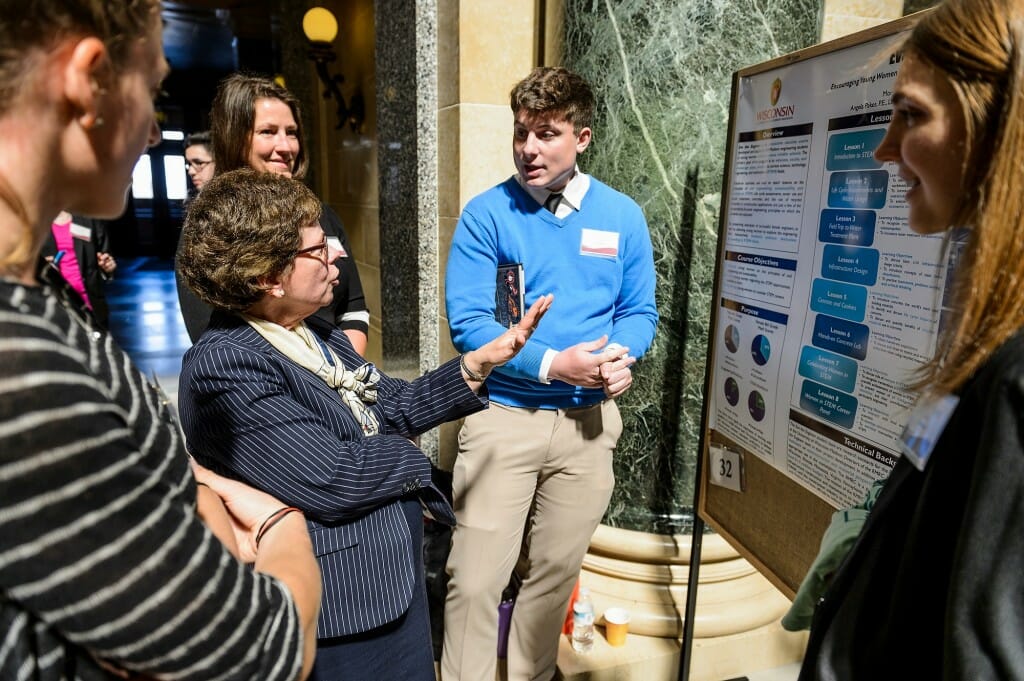 9 Students Renee Olley, Tyler Klink and Morgan Sanger (left to right) explained their research to the chancellor during "Research in the Rotunda," an outreach event for political leaders, alumni and members of the public at the state Capitol on April 11, 2018. Photo by: Jeff Miller 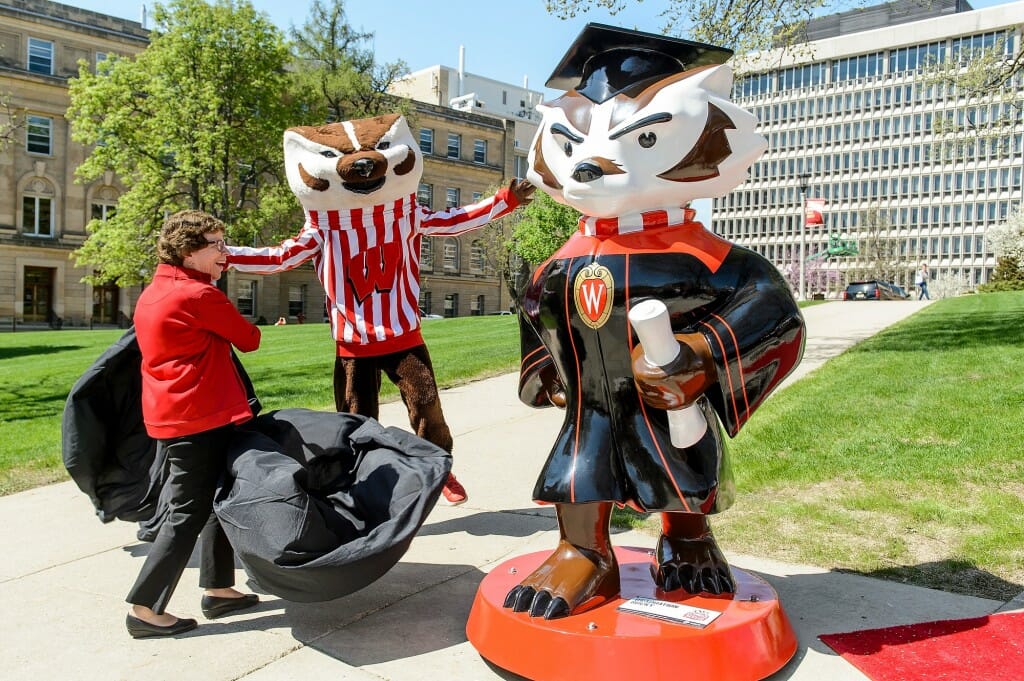 10 In a lighthearted "Becky and Bucky" moment, Blank unveiled the "Graduation Bucky" statue on Bascom Hill on May 7, 2018. It was one of 85 Buckys decorated by local and regional artists and displayed around campus and the Madison area for the "Bucky on Parade" public art project. Photo by: Bryce Richter 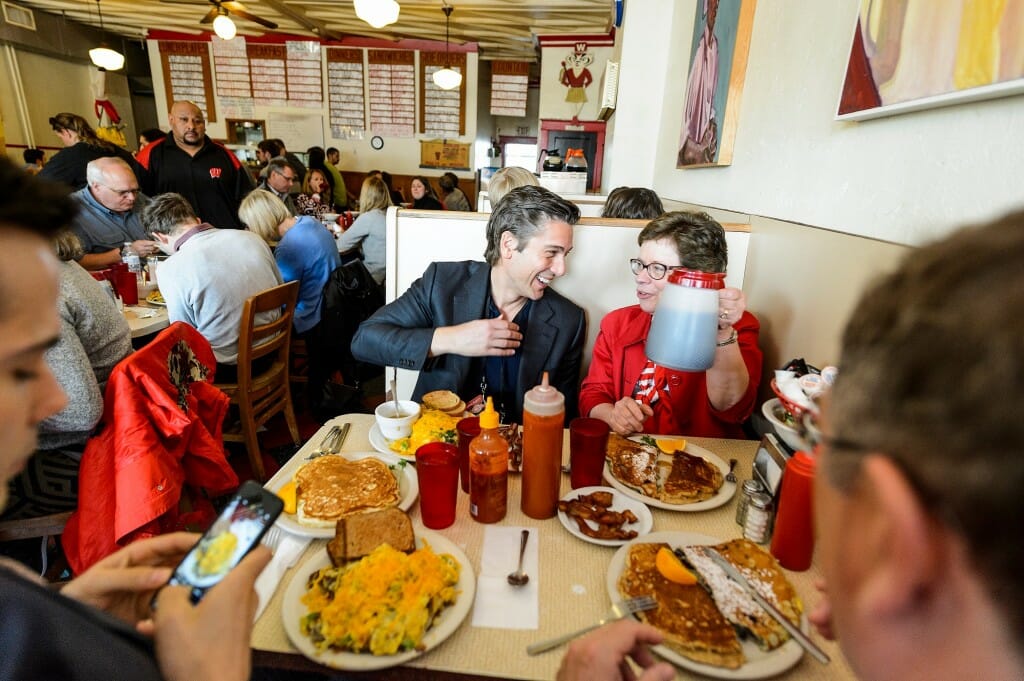 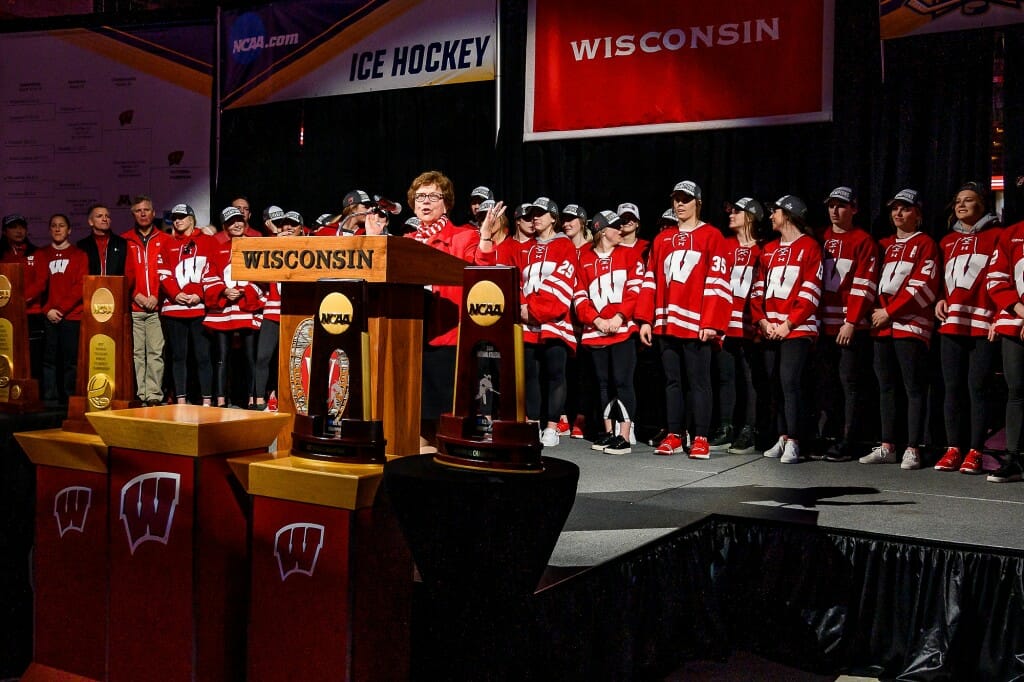 12 Blank lauds the UW women's hockey team's success as national champions during a celebration at the Kohl Center on March 25, 2019. The No. 1-ranked Badgers defeated Minnesota to claim the NCAA title. Photo by: Bryce Richter 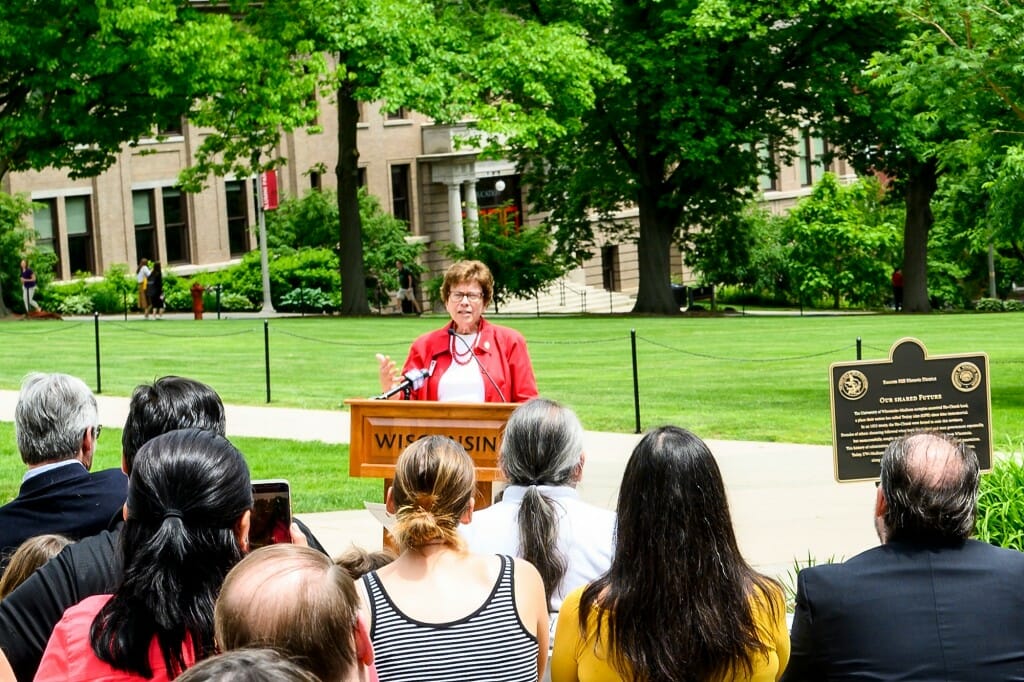 13 The chancellor and members of the Ho-Chunk Nation dedicated the "Our Shared Future" heritage marker on Bascom Hill on June 18, 2019 — acknowledging that the university occupies ancestral Ho-Chunk land. Photo by: Bryce Richter 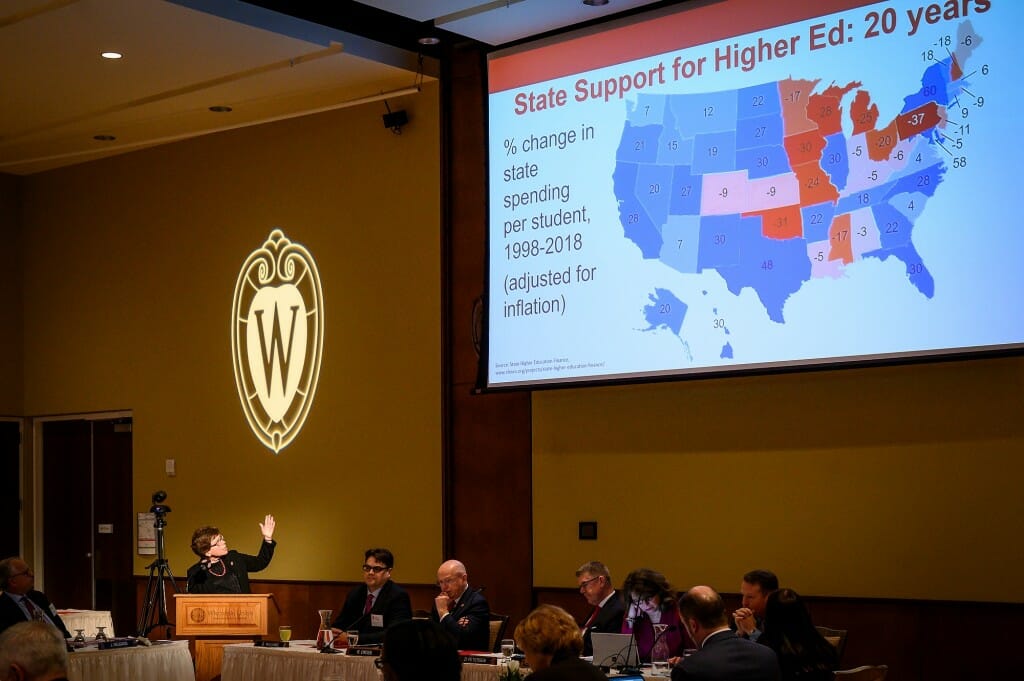 14 Trends in funding of public higher education were a major concern, as Blank noted in an appearance before the UW System Board of Regents at Union South on Feb. 6, 2020. Photo by: Bryce Richter 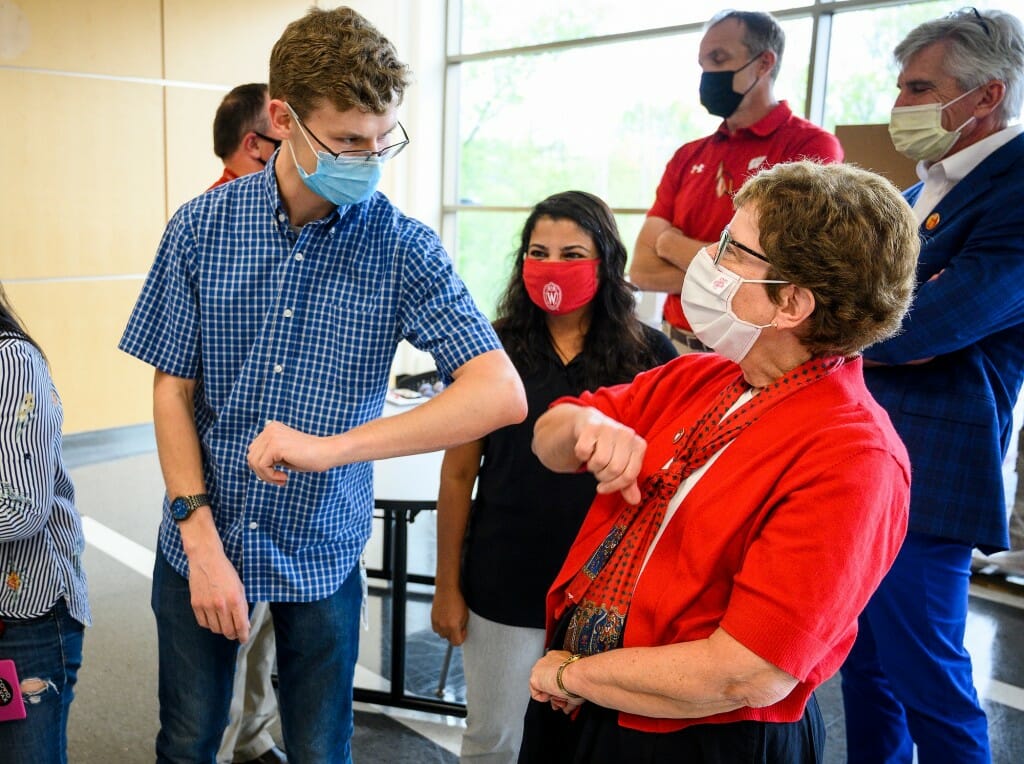 15 Blank guided the campus through difficult circumstances arising from the COVID-19 pandemic. She and microbiologist Jaret Schroeder observed health and safety precautions in effect at the time during a Sept. 3, 2021, luncheon for Wisconsin Veterinary Diagnostic Lab staff who supported campus testing efforts. Photo by: Jeff Miller 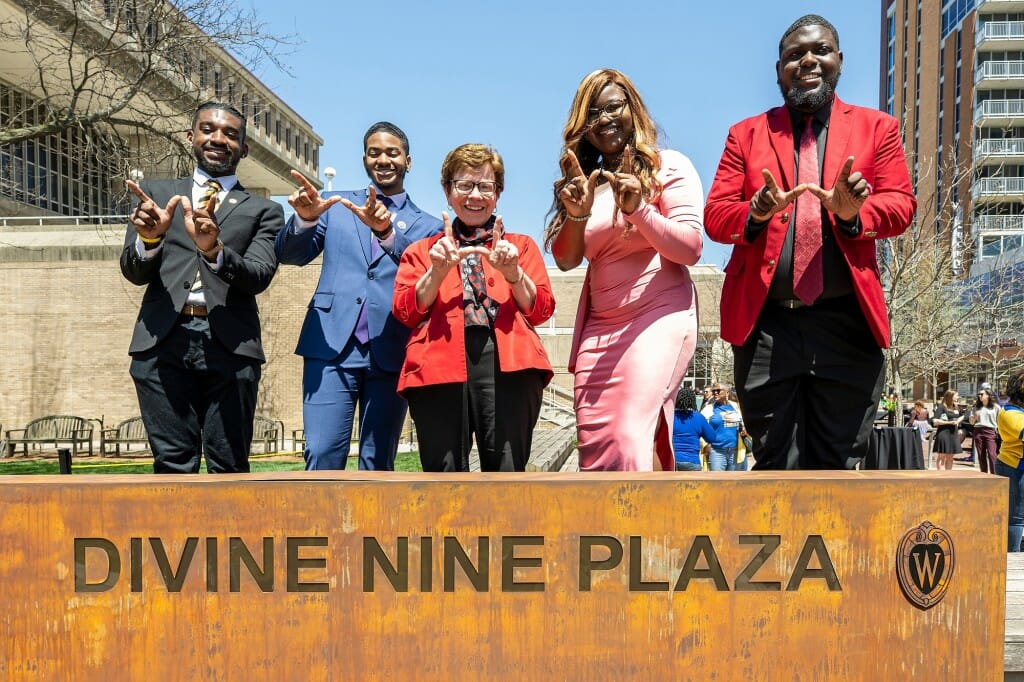 16 Blank joined members of UW–Madison’s Black Greek-letter fraternities and sororities for the dedication of a plaza on East Campus Mall honoring the organizations known collectively as the "Divine Nine." Photo by: Bryce Richter 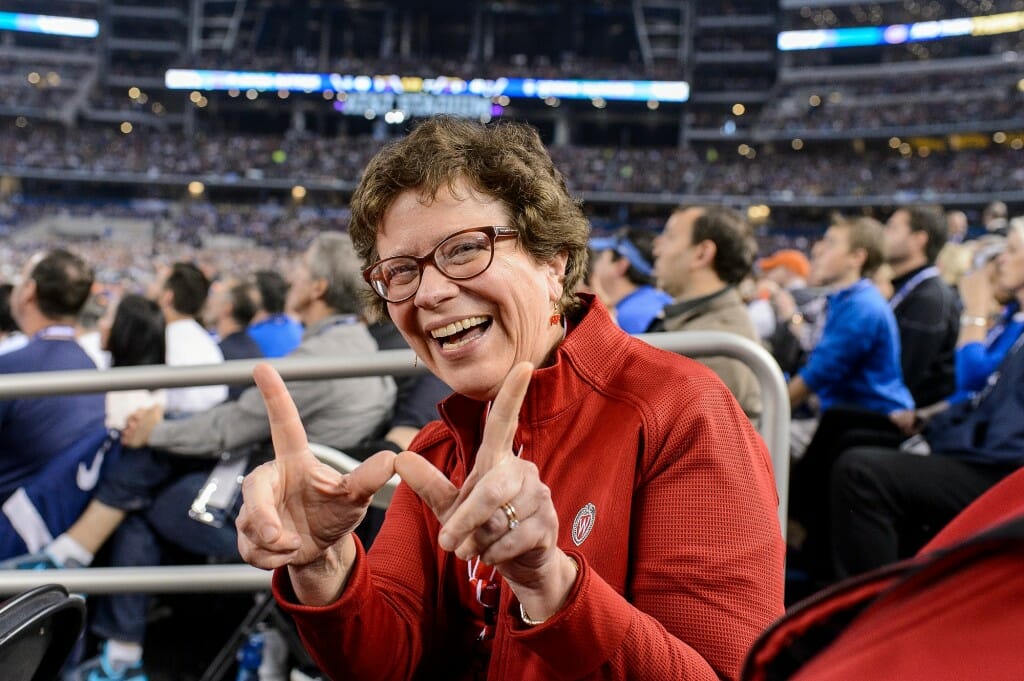 17 "I have come to love this campus, as I know you do," said Blank in her final blog post to the university. "I look forward to watching it continue to move forward." Photo by: Bryce Richter