It isn’t every day that a University of Wisconsin–Madison researcher is presented an award by the Emperor and Empress of Japan, but on June 27 the School of Veterinary Medicine’s Yoshihiro Kawaoka will be able to add that to his credentials.

Emperor Akihito and Empress Michiko will honor Kawaoka with a scientific achievement award in the field of agriculture from the Japan Academy, which is celebrating its 106th annual ceremony. 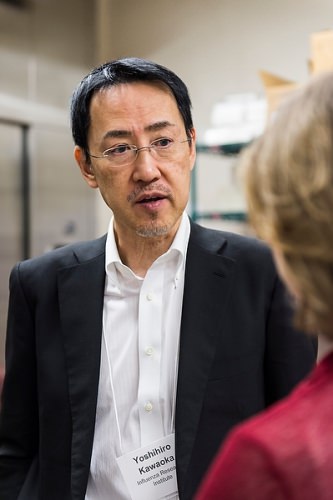 “It is like the United States’ National Academy of Sciences, the Japan Academy,” says Kawaoka. “The academy has different divisions and it can nominate individuals for awards each year. … It’s a big deal in Japan.”

Each year, the members of the Japan Academy nominate and award multiple Japanese researchers for the Japan Academy Prize and the Imperial Prize. The agency says on its website that those chosen for the award from among the nominees are selected because they have “achieved notable research landmarks” or have “authored particularly outstanding academic papers or books.”

Like an award he received in 2015 from the United Nations Educational, Scientific and Cultural Organization (UNESCO), Kawaoka was chosen by the Japan Academy for his fundamental studies of the influenza virus leading to improved vaccines and better understanding of pandemic flu. He will receive a certificate, medal and prize money totaling 1 million yen (roughly $10,000).

Before World War II, Kawaoka explains, emperors of Japan were akin to a god, but since that time, they have come to better represent and interact with everyday people.

“When an earthquake occurs, they visit and talk to the people,” says Kawaoka. “That never happened before the war, but it happens now.”

Emperor Akihito has held the now largely symbolic title since 1989. He is the ceremonial head of Japan’s constitutional monarchy and is the highest authority of the Shinto religion. The Emperor represents the unity of Japan’s people.

Kawaoka was chosen for his fundamental studies of the influenza virus leading to improved vaccines and better understanding of pandemic flu.

Along with the nine other award recipients, Kawaoka will dine at the palace with the Emperor and Empress following the ceremony.

“It’s exciting because I will have the opportunity to explain to them what we did,” he says.

Notably, all of the Japan Academy Prize winners are men. Kawaoka says of the 36 full professors at the Institute of Medical Science, the University of Tokyo, where he is also a professor, only two are women.

“It’s part of the culture and I think that’s why Japan will have a better scientific future — it is not utilizing 50 percent of the intellectual power in society,” he says, noting Japan is starting to better recognize the role women in the country have to play in advancing scientific knowledge.

Kawaoka, too, is humble about his award.

“Like every award, it can be very political. Many great scientists are not awarded,” he says.