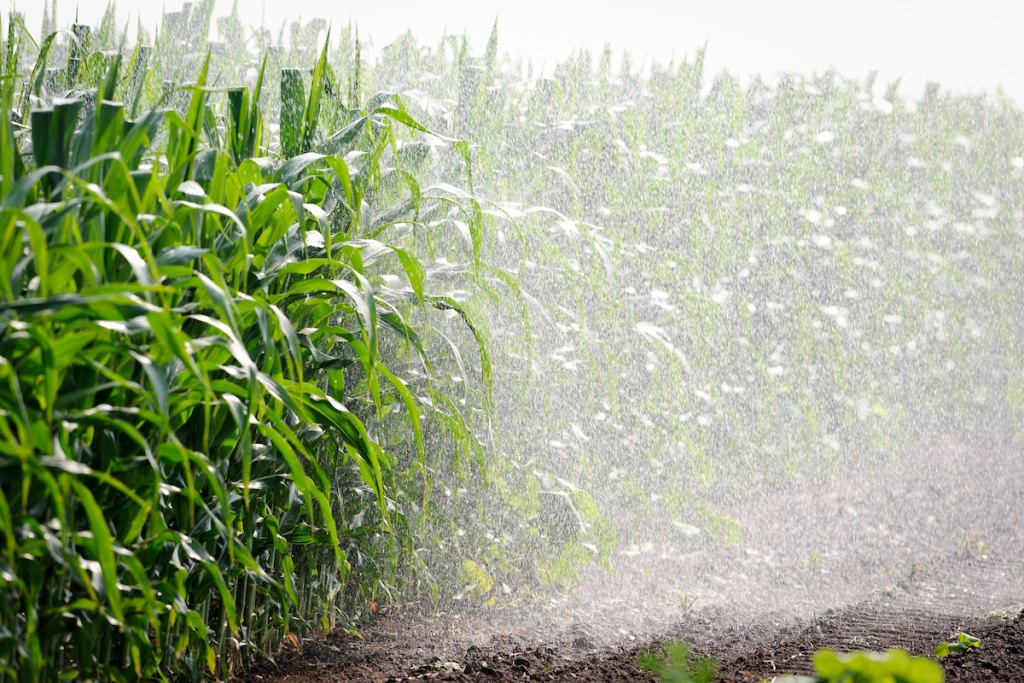 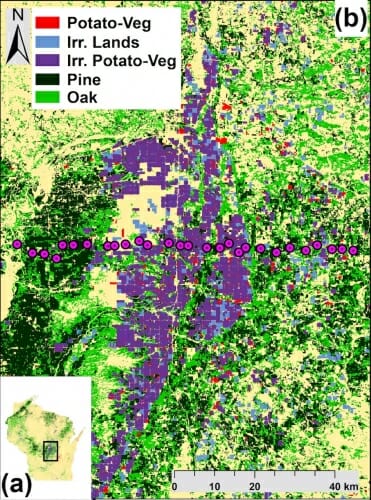 A map of the Central Sands region of Wisconsin where researchers studied the effects of irrigation on the local climate. A sensor was placed at each pink dot to mark a line across the region as it changed from pine plantations to farms to forests. Image courtesy Mallika Nocco/Christopher Kucharik

The results show that the conversion of land to irrigated agriculture can have a significant effect on the regional climate, which in turn can affect plant growth, pest pressure and human health in ways that could be overlooked unless land uses are accounted for in forecasts and planning.

Such a cooling effect mitigates — and obscures — a global warming trend induced by the accumulation of greenhouses gases in the atmosphere. Irrigated farming, like all agriculture, also generates greenhouses gases.

The work was led by Mallika Nocco, who recently completed her doctorate in the Nelson Institute for Environmental Studies at the University of Wisconsin–Madison. Nocco worked with Christopher Kucharik of the Nelson Institute and the UW–Madison agronomy department and Robert Smail from the Wisconsin Department of Natural Resources.

The team published their findings July 2 in the journal Global Change Biology.

“We’re finding that weather forecasts can be wrong if they don’t take these land uses into account,” says Nocco, now a postdoctoral researcher at the University of Minnesota. “That will affect both farmers and plants.”

Irrigation, and agriculture generally, cools the air due to the evaporation of water through crop leaves, much like how evaporating sweat cools people. This evaporation also increases the water content of the air. The scientists wanted to determine if the naturally humid Wisconsin climate would respond as strongly to irrigation as drier regions, such as California, do.

To find out, Nocco worked with private landowners to install 28 temperature and humidity sensors in a line that crossed through the Central Sands. The 37-mile transect extended from pine plantations in the west, over irrigated farms toward forests in the east. The researchers collected data across 32 months from the beginning of 2014 through the summer of 2016.

Each of the 28 sensors was matched to nearby irrigation levels through a regional well withdrawal database managed by Smail of the Department of Natural Resources.

Nocco’s team found that irrigation lowered the maximum daily temperature about three and half degrees compared to nearby rainfed farms. Adjacent forests were slightly warmer than either rainfed or irrigated farms.

The researchers found that if all land in the study area were converted to irrigated agriculture, the daily range in temperatures would shrink nearly five degrees Fahrenheit on average, and up to eight degrees at the high end. This smaller difference between daily maximum and minimum temperatures can significantly affect plant growth or insect pest lifecycles, both of which are sensitive to daily temperatures.

“If you’re adjusting the range of temperatures, you’re changing who or what can live in an area,” says Nocco.

The temperature differences between irrigated fields and rain-fed fields or forests were pronounced during the growing season, when fields were being irrigated, but extended throughout the year. Open fields of snow reflect more winter sunlight than forests do, keeping the air above cooler, but it’s not entirely clear what drives winter temperature differences between irrigated and non-irrigated farms.

While the cooling effect of irrigation mitigates global climate change on the regional scale, climate models suggest that regional warming attributed to the global trend will eventually overcome the magnitude of mitigation offered by irrigated agriculture. Farmers, who are partially buffered for now from more extreme heat, would quickly face increasing stress in that scenario.

“Farmers in irrigated regions may experience more abrupt temperature increases that will cause them to have to adapt more quickly than other groups who are already coping with a warming climate,” says Kucharik. “It’s that timeframe in which people have time to adapt that concerns me.”

The current study is the first to definitively link irrigation in the Midwest U.S. to an altered regional climate. These results could improve weather and climate forecasts, help farmers plan better, and, the researchers hope, better prepare agricultural areas to deal with a warming climate when the irrigation effect is washed out.

“Irrigation is a land use with effects on climate in the Midwest, and we need to account for this in our climate models,” says Nocco.