John Biondi, the founding director of the Discovery to Product program at UW–Madison, is heading home to his southwestern Wisconsin apple farm after three productive years heading UW–Madison’s groundbreaking effort to move innovation from the laboratory to the startup. 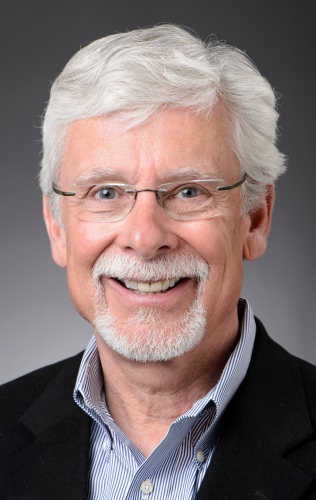 “I spent three years getting D2P going, and we did some good things in commercializing innovation from campus,” Biondi says. “Now it’s time to turn it over to someone else who can take it to the next level.”

“As the founding director of this innovative campus-wide effort, John accomplished a tremendous amount in a short period,” says Provost Emeritus Paul M. DeLuca Jr., who collaborated with Wisconsin Alumni Research Foundation (WARF) Managing Director Carl Gulbrandsen and UW–Madison Chancellor Rebecca Blank in forming D2P, which is open to student, faculty and staff innovators who have not yet formed a company. “These efforts have served to change the engagement of our students, staff and faculty in commercialization of discoveries.”

“John injected a great deal of energy into the entrepreneurial ecosystem in Madison,” says William Murphy, founder of Stem Pharm, a D2P project that produces specialized cells for pharmaceutical and biological research, and a professor of biomedical engineering.

“His emphasis on the ‘lean startup’ approach was quite helpful for several UW faculty and students. His initiatives are already contributing to notable successes throughout the UW campus and beyond.”

D2P was started three years ago as a way to help translate UW–Madison’s research prowess into startup companies and, eventually, jobs. D2P has seen 15 businesses created from the 24 projects it funded. A fresh crop of nine projects are in the pipeline but not yet funded. D2P has consulted with at least 50 other projects on campus, says Biondi.

Biondi was chosen for his entrepreneurial record in finance and management at six technology companies. Two of them developed surgical lasers in the 1980s, during the birth of minimally invasive surgery. Biondi also assisted a health care information technology startup that was the first to use tablet computers at the point of care. 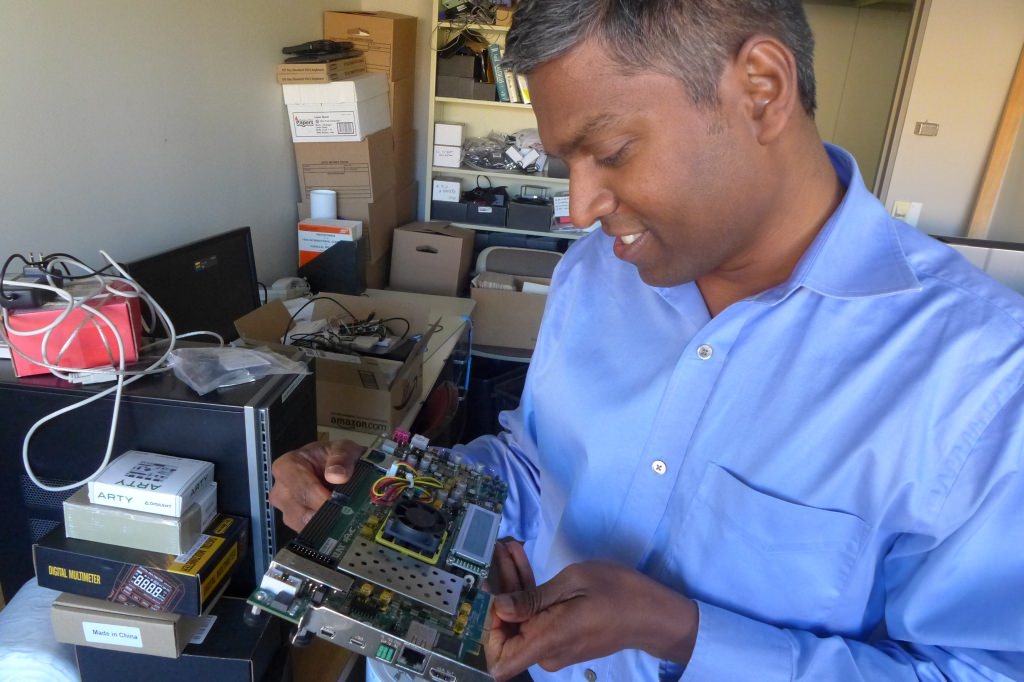 On campus, Biondi helped transform brilliant ideas into viable companies. Already, more than a half-dozen such business are poised for rapid growth:

“John is a great mentor,” says Zhang. “Coming from the business sector, he not only taught us the basic principles but also practical issues in setting up the startup through D2P. Even after BrainXell ‘graduated,’ John periodically checked with us and offered valuable advice. D2P will have a positive impact on UW–Madison, and John has his mark on it.”

D2P was created in 2013 through a joint memorandum of agreement between UW–Madison and WARF. D2P’s mission has been to provide a front door to entrepreneurs and innovators on campus to help them find and leverage resources, foster collaborations, accelerate the commercialization of campus innovations, and help transform the campus culture to cultivate entrepreneurship, startups and commercialization.

In November 2013, the D2P program received a $2.4 million Incentive Grant from the UW System to create Igniter, an education and award program to commercialize UW research and innovation.

“I spent three years getting D2P going, and we did some good things in commercializing innovation from campus. Now it’s time to turn it over to someone else who can take it to the next level.”

“We are thankful for John’s leadership of D2P over the past three years, and in particular, his support of the Igniter education and grant award program,” says Marsha Mailick, U-Madison’s vice chancellor for research and graduate education. “This has been a significant accomplishment for a new campus program that we are excited to continue to support.”

Mailick has appointed her chief of staff, Andy Richards, as interim director of D2P.

For entrepreneurs, a key D2P theme is product-market fit, Biondi says. “That’s the process of getting crisp about the value proposition for any given innovation. Most innovations can serve several markets, but the press of time and money forces entrepreneurs to focus on near-term, affordable markets.”

Re Mixers provides a great example, Biondi says. “If D2P was not there, those young guys would have tried to apply their invention to the process engineering world and would have failed. That market requires lengthy testing and adoption, but few facilities are built each year and they are designed to last for decades.” 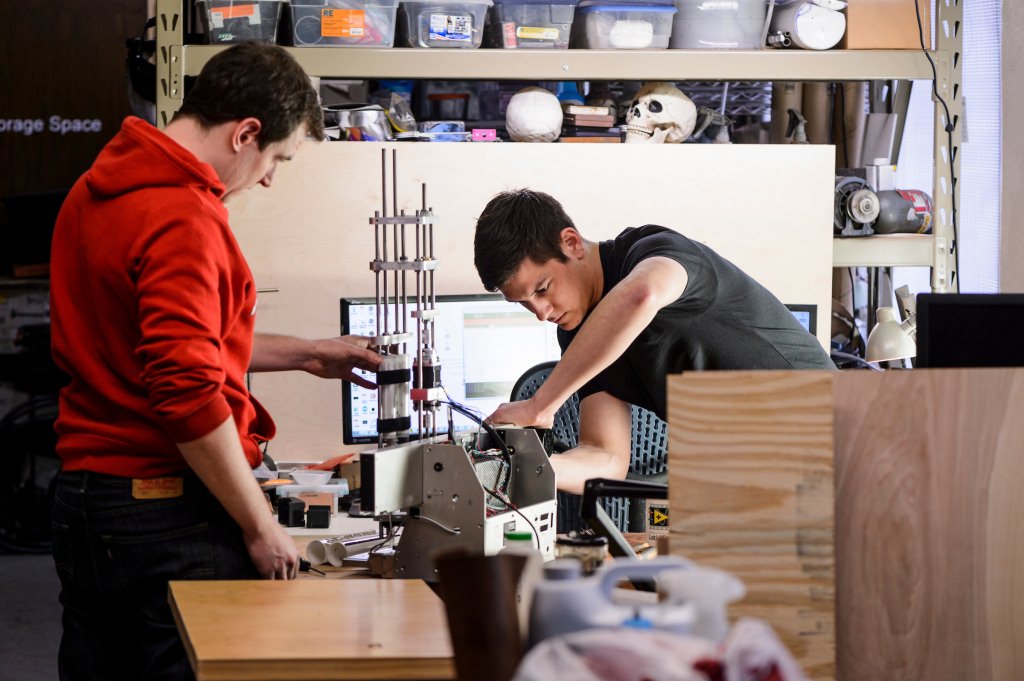 Working with D2P, the founders shifted their emphasis to construction, where epoxy nozzles waste valuable adhesive and need frequent replacement. “They did the work and we helped them find a market that could be addressed very nicely with startup resources,” Biondi says.

D2P also emphasizes that technology alone is not enough, Biondi says. “Faculty innovators don’t always realize that just throwing the technology out is no ticket to success.”

Although some innovators have backed away after confronting the time demanded by a startup, “that’s a good thing,” Biondi says. “It’s not always a given that starting a business makes sense.”

One key to D2P’s success, says DeLuca, was Biondi’s emphasis on assembling a broad range of functions in the university. “John brought together campus experts ranging from business to law to patent/licensing to guide ideas into successful products and companies.”

How can UW–Madison improve the entrepreneurial culture that is key to job formation? “Certainly the creativity and skills exist here,” Biondi says. “There is a lot of innovation in the colleges where technology is housed, and the business school is constantly looking for ways to teach and promote innovation.”

“John brought together campus experts ranging from business to law to patent/licensing to guide ideas into successful products and companies.”

But on top of that, he says, “there needs to be a commercial layer that emphasizes tighter coordination, starting when a project leaves the lab. There are constant needs for money, to get the technical proof of concept, to achieve market de-risking. And then, at the time of incorporation, additional equity money is needed for launch and commercialization. The money chain needs to be available on a consistent basis so innovators can count on it.”

Still, he says it’s “absolutely” realistic to think about improving the stream of campus startups and spinoffs. “I think we have taken a few steps down that path, but compared to our peers, we are not out in front. And given the assets, range and creativity at UW–Madison, we should be.”