When researchers found invasive Asian jumping worms at the University of Wisconsin–Madison Arboretum in 2013, they spotted an opportunity to follow the invaders, and their effects, from the beginning.

In a recent report, UW–Madison ecologists found that the exotic earthworm species are rapidly displacing established European varieties in Arboretum woods. But despite the jumping worms’ known appetite for leaf litter and tendency to change soil nutrients, the researchers found limited evidence of changes to vegetation in areas where the worms have invaded.

The researchers will continue to track the jumping worm invasion as it matures.

The jumping worm — so called for its defensive thrashing behavior when disturbed — is native to East Asia and was first identified in Wisconsin on Arboretum grounds in 2013. Since then, it has been found throughout south central Wisconsin, and UW–Madison researchers have tracked its movement and effects on local ecosystems. The Asian jumping worm joins invasive European earthworms, which were brought to southern Wisconsin with European settlement after glaciers scrubbed the landscape clean of any native earthworms.

Among the many questions about this new invader is how it will alter the ecosystems it pushes into, says Laushman.

“Because my interests were in botany, my goals were to think about understory vegetation and how that might change in the first years of the worm’s arrival,” says Laushman, who is now a field manager with the U.S. Geological Survey in Flagstaff, Arizona. 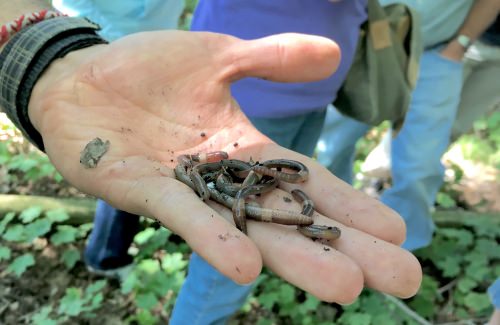 UW–Madison integrative biology professor Monica Turner had previously found that the worms churn through leaf litter at a rapid clip, flooding the soil with extra nutrients. Laushman figured that this change in nutrient cycling might alter the abundance and variety of plants in areas where the invaders had taken over.

In August of 2015 and 2016, Laushman and Herrick sampled plots throughout sections of the Arboretum woods, which are dominated by sugar maples, dotted with large oaks and filled in with common understory plants like Virginia creeper and jack-in-the-pulpit. They poured an irritating mustard tea onto the soil to flush out the earthworms and documented the different species, while recording the plants found in each plot.

“There’s something going on when jumping worms move into an area,” says Herrick. “Other, European species move out, are killed, or are displaced in some way.”

But that rapid spread of jumping worms was not paired with strong effects on vegetation, which changed little over the study period.

“It might be that it is too early in the invasion process to detect changes,” says Herrick, adding that the jumping worms may go on to alter the forest understory as the invasion continues.

Herrick has continued surveying the same plots and plans to follow their outcomes in future seasons to track the ongoing effects of the recent, wriggling invaders.