Gardeners tend to look at earthworms as good helpers that break down fallen leaves and other organic matter into nutrients plants can use.

But not all earthworms do the same work in the soil. New research from the University of Wisconsin–Madison shows that Asian jumping worms, an invasive species first found in Wisconsin in 2013, may do their work too well, speeding up the exit of nutrients from the soil before plants can process them.

“Earthworms are the kind of organisms we call ecosystem engineers. They change the physical and chemical properties of the ecosystem as they dig and feed,” says Monica Turner, a UW–Madison professor of zoology. “But nobody really understood if these Asian worms would have the same effect as the European worms we have had here for many years.” 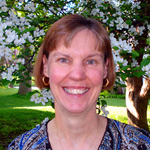 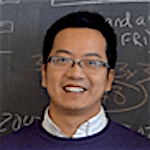 Jiangxiao Qiu, a former graduate student in Turner’s laboratory and now a postdoctoral researcher with The Nature Conservancy, studied the impact the Asian worms — of the species Amynthas agrestis and Amynthas tokioensis — from July through October of 2014 in the forest at the UW Arboretum, and conducted an experiment on soil samples taken from around southern Wisconsin. Qiu’s work was published this week in the journal Biological Invasions.

Unlike deep-dwelling European earthworms, the Asian jumping worms — named for the way they flop and wriggle when held or disturbed — prefer to live and eat within a few centimeters of the soil surface.

“What most interested me was how these earthworms would change the forest floor, especially the litter layer on top of the soil — dead leaves and twigs and other materials,” says Qiu. “And we could see the difference they made in the physical structure of the soil and the amount of leaf litter.”

Leaf litter declined by 95 percent in forested study areas, and the Asian worms left behind residue that was almost pebbly in consistency — grainy little balls of dirt that may make it hard for the seeds of native plants to germinate.

“Some plants need that leaf litter layer to get established at all,” Turner says. “If the litter layer is gone, and the soil is bare and clumpy, the earthworms may help weedy plants come in along with other invasive plants that we don’t want.” 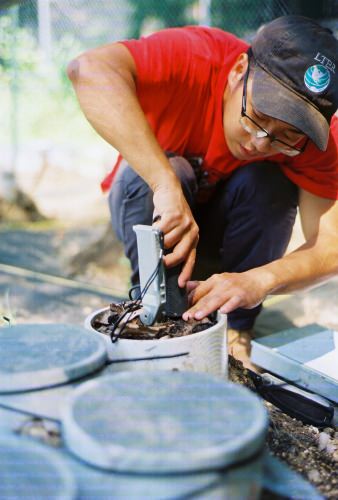 Through their flexible diets and high numbers, the Asian invaders make quick work of whatever food they find.

“These earthworms live in much higher density than European earthworms, and that leads to a much faster transformation from litter to available nutrients,” Qiu says. “This increases the nutrients — such as carbon, nitrogen and available phosphorus— in the top soil.”

Concentrations in the soil of some minerals released from the leaf litter as the worms eat increased down to a depth of 25 centimeters, and spiked later in the growing season when the worms are largest and most active.

“The fact that they take nutrients that are not available to plants — because they’re tied up in the dead leaves — and make them available to plants is something you might like to have happen in your garden,” Turner says. “But from our numbers, these worms make that natural process happen roughly twice as fast. It’s like a fast-release fertilizer instead of slow-release, and that changes where the nutrients end up.”

They may end up washing away before they can benefit many plants that count on a slower release, and then turn up where they’re not wanted.

“Nitrate dissolves readily in water, and it moves with water. It’s disappearing with the rain,” says Turner. “And nitrate is a groundwater contaminant in many wells in Wisconsin, so it’s not just the plants that benefit if the nitrate does not infiltrate deeper and deeper into the ground.”

While Qiu noted the biggest changes in forest soils, samples from prairie soils showed changes, too. And grasslands are the choice habitat for the worms in their native ranges in East Asia.

“This suggests the prairie ecosystems might also be susceptible to future invasions,” says Qiu, whose research was supported by the National Science Foundation.

Turner and other UW–Madison researchers are working on new studies exploring the invasive worms’ range, how plants may deal with the changing soil chemistry, and the interaction between the Asian jumping worms and invasive plants like buckthorn.

“It’s the balance between a lot of competing plant, animal and microbial processes that will determine the long-term effect of these earthworms,” Turner says.