The moment of truth for Will Caldwell came when a car suddenly emerged from a parking lot. He was riding his bike and didn’t see it. But the lasers in the prototype “Safe Cycle” warning system did, and the handlebars vibrated in warning.

“I thought, ‘It just saved my life,'” says Caldwell. He’s a sophomore in mechanical engineering who leads a team of three other undergraduates that is trying to put eyes on the back of a rider’s head.

The project, embodied in a wired-and-cable-tied contraption, is being developed at the Internet of Things (IoT) Lab in the Mechanical Engineering Building at the University of Wisconsin–Madison. It received the “Most Potential Impact” award at the annual IoT Open House Dec. 11. 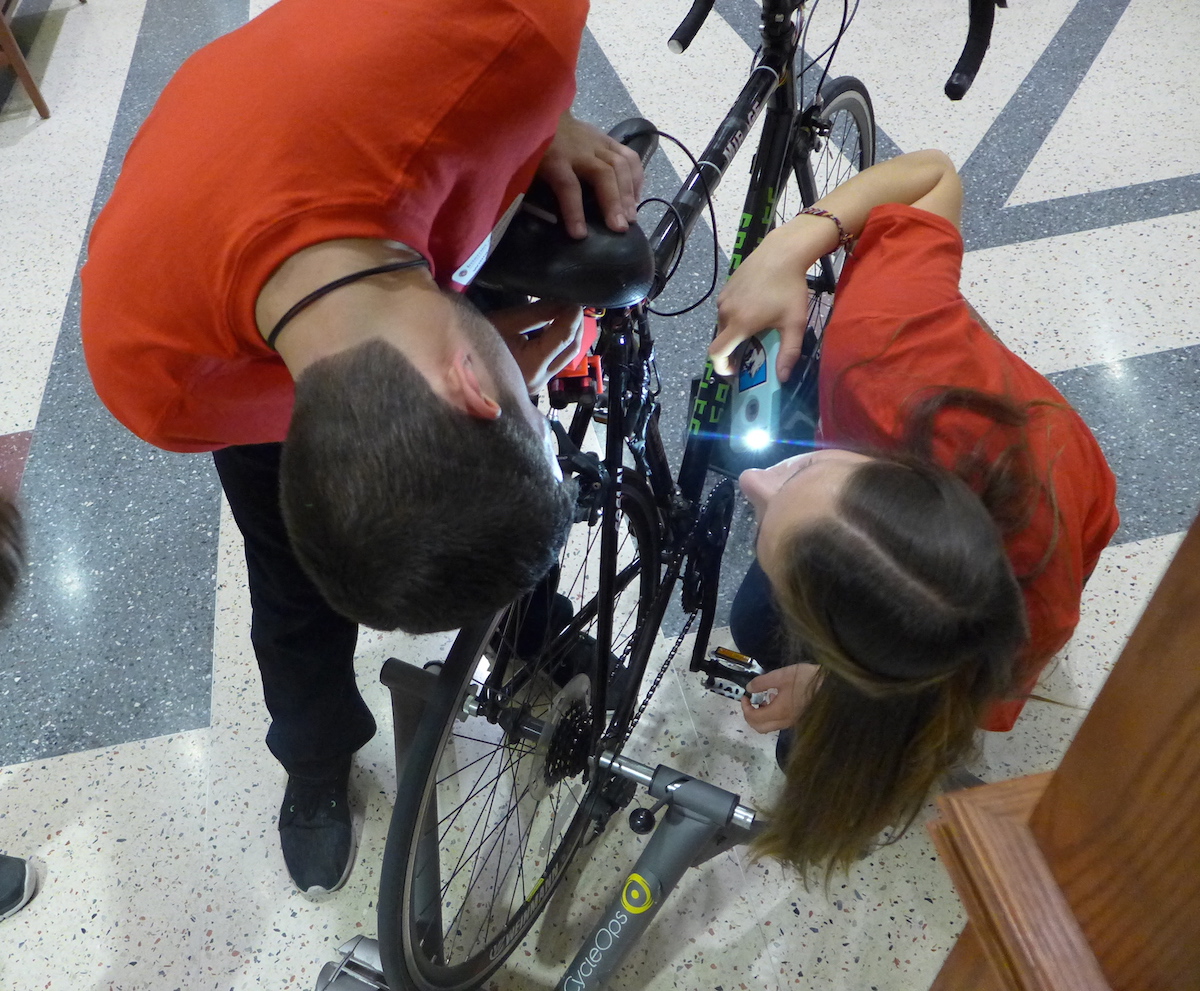 Will Caldwell and Katie Miller prepare the Safe Cycle device for the Internet of Things Open House on Dec. 11. Safe Cycle is designed to alert a bicycle rider to traffic behind the bike. David Tenenbaum

The open house was held to showcase projects to campus visitors and the IoT Lab’s growing number of industrial collaborators.

As a phrase, IoT carries a lot of freight. At its simplest, it means uniting the things around us with the digisphere. Already, IoT can mean jet engines that communicate their status to maintenance departments, smartphones that “talk” to a thermostat, and packages that automatically signal their location to shippers.

In two years of existence, the lab has grown into a “pre-incubator” where students with big ideas are teaming up to advance their technology and business sense.

The lab offers encouragement, technology and advice. This year, 230 students attended the information session and 60 spent the fall working on 20 projects related to apps and devices, such as a digital home message center and a health monitoring bracelet.

Only the imagination limits future embodiments of the Internet of Things.

This year, the lab is expanding in another direction, says Bradley. “I am pleased with how the lab has grown from a technology sandbox into a growing community of students, faculty and industry-leading companies. As many as 35 companies have confirmed interest in joining the lab. American Family Insurance, A.O. Smith Corp., Andersen Corp. and Rockwell Automation have already joined.”

“We focus on helping manufacturers be more successful,” said Joe Kann, Rockwell’s vice president of global business development, during the open house. “And we know that there is research that needs to be done in applying IoT to manufacturing. We need a whole new crop of talent to apply that. We recruit from all the research universities and we get more people from UW–Madison than any other school. It’s a very important campus to us, and we want to have a deep relationship.”

Corporate “members” of the IoT Lab can pay an annual contribution to take part in workgroup projects, learning events and other activities. A select group of companies, the “core partners,” are expected to make a more substantial investment that will enable them to guide the lab’s strategic direction and use the lab as a resource to enhance IoT innovation, capability and talent. “We have a diverse group of companies that share the same questions around IoT,” Bradley says, “and we will provide the tools and resources to give them a competitive edge.”

We know that there is research that needs to be done in applying IoT to manufacturing. We need a whole new crop of talent to apply that.

Cisco Systems, the networking giant, uses the term “the Internet of Everything,” says Elizabeth Echele, Cisco’s IoT product specialist. “It’s people, process, things and what you do with the data so you are providing the right information to the right people. Cisco wants to be right in the middle of that.”

The early skepticism about IoT has vanished, says Bradley. “The Internet of Things is not just a fad. We hear from students and industry that we are focusing on the right things.”