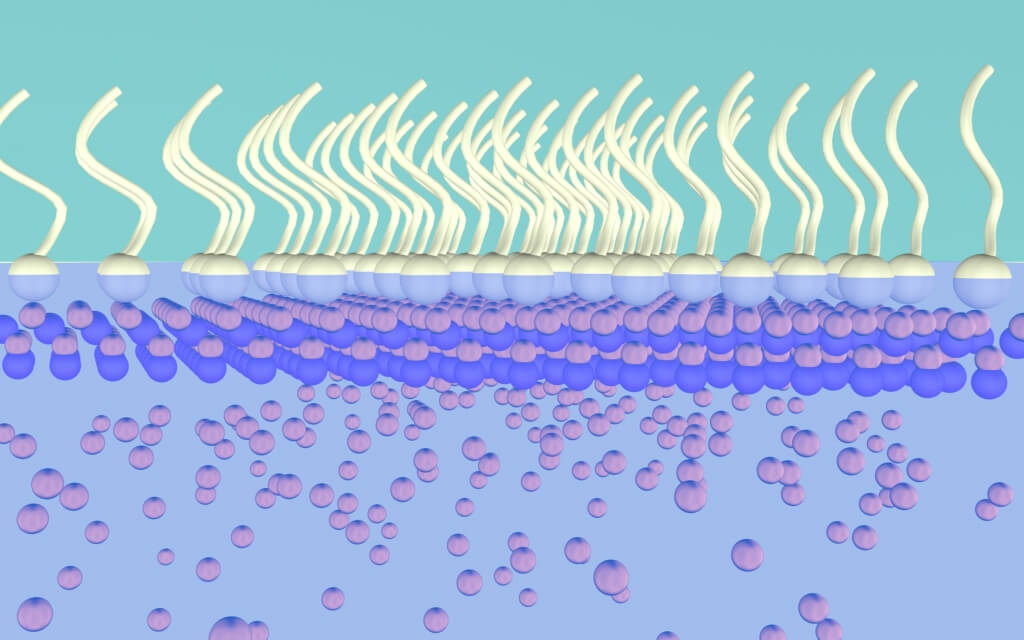 The new nanoscale manufacturing process draws zinc to the surface of a liquid, where it forms sheets just a few atoms thick. Xudong Wang

After six years of painstaking effort, a group of University of Wisconsin–Madison materials scientists believes the tiny sheets of the semiconductor zinc oxide they’re growing could have huge implications for the future of a host of electronic and biomedical devices.

The group — led by Xudong Wang, a UW–Madison professor of materials science and engineering, and postdoctoral researcher Fei Wang — has developed a technique for creating nearly two-dimensional sheets of compounds that do not naturally form such thin materials. It is the first time such a technique has been successful.

The researchers described their findings in the journal Nature Communications on Jan. 20.

Essentially the microscopic equivalent of a single sheet of paper, a 2-D nanosheet is a material just a few atoms thick. Nanomaterials have unique electronic and chemical properties compared to identically composed materials at larger, conventional scales.

“What’s nice with a 2-D nanomaterial is that because it’s a sheet, it’s much easier for us to manipulate compared to other types of nanomaterials,” says Xudong Wang.

Until now, materials scientists were limited to working with naturally occurring 2-D nanosheets. These natural 2-D structures include graphene, a single layer of graphite, and a limited number of other compounds.

Developing a reliable method to synthesize and manufacture 2-D nanosheets from other materials has been a goal of materials researchers and the nanotechnology industry for years.

In their technique, the UW–Madison team applied a specially formulated surfactant — a detergent-like substance — onto the surface of a liquid containing zinc ions.

Xudong Wang first had the idea for using a surfactant to grow nanosheets during a lecture he was giving in a course on nanotechnology in 2009.

“The course includes a lecture about self-assembly of monolayers,” he says. “Under the correct conditions, a surfactant will self-assemble to form a monolayer. This is a well-known process that I teach in class. So while teaching this, I wondered why we wouldn’t be able to reverse this method and use the surfactant monolayer first to grow the crystalline face.”

The tiny sheets of the semiconductor zinc oxide they’re growing could have huge implications for the future of a host of electronic and biomedical devices.

After five years of trial and error with different surfactant solutions, the idea paid off.

“We are very excited about this,” says Xudong Wang. “This is definitely a new way to fabricate 2-D nanosheets, and it has great potential for different materials and for many different applications.”

Zinc oxide is a very useful component of electronic materials, and the new nanosheets have potential for use in sensors, transducers and optical devices.

But the zinc oxide nanosheets are only the first of what could be a revolution in 2-D nanomaterials. Already, the UW–Madison team is applying its surfactant method to growing 2-D nanosheets of gold and palladium, and the technique holds promise for growing nanosheets from all sorts of metals that wouldn’t form them naturally.

“It brings a lot of new functional material to this 2-D material category,” Wang says.