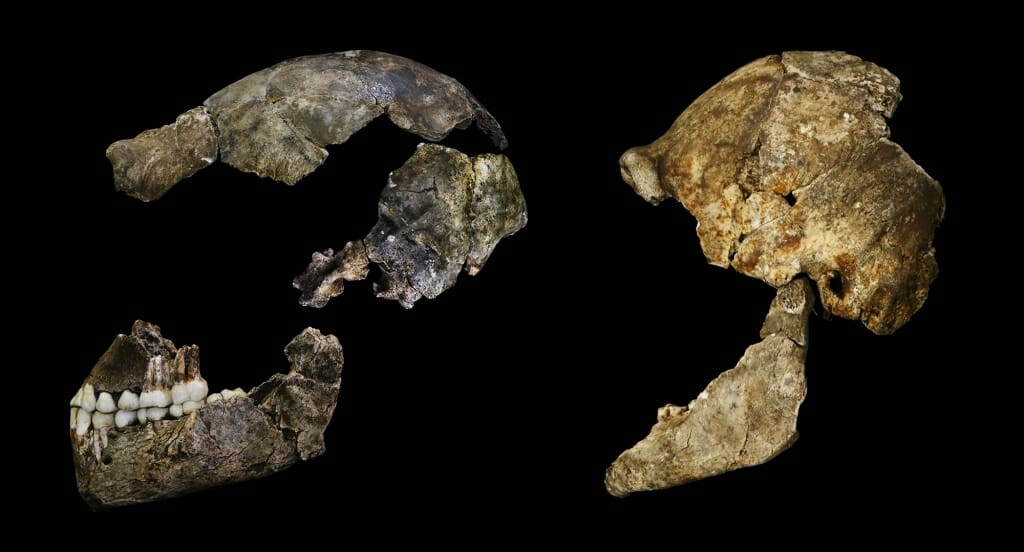 The skulls of Homo naledi bear traces on their inside surfaces of the shape of naledi’s brain. Only a third the size of human brains, they nonetheless had some surprisingly human-like features. John Hawks, UW–Madison

In Africa, between 200,000 and 300,000 years ago, a small-brained human-like species called Homo naledi roamed the landscape alongside other early humans with larger brains, including those that may have ultimately become us — modern Homo sapiens.

Scientists and nonscientists have often associated larger brains with greater intelligence, but a new study published Monday (May 14, 2018) in the Proceedings of the National Academy of Sciences may challenge that notion. It shows that though its brain was small like those of apes and our more distant human ancestors, such as Australopithecus sediba, Homo naledi’s brain shared structural features (grooves and folds) decidedly more like humans.

“Maybe brain size isn’t all it’s cracked up to be,” says one of the study’s corresponding authors, John Hawks, a paleoanthropologist at the University of Wisconsin–Madison. “It opens the door for us to say that maybe they were more capable than we might assume; maybe it isn’t just (brain) size.” 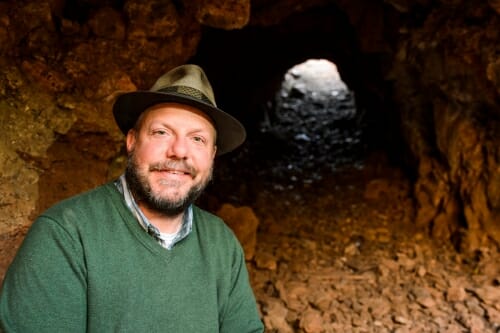 The study team used seven cranial, or skull, fragments from at least five individuals of Homo naledi found in 2013 in the Dinaledi Chamber of South Africa’s Rising Star Cave to develop a virtual three-dimensional model of part of the cranium. From these, they recreated the inside portion of the skull (an endocast) and were able to examine the imprints left behind by the brain.

This revealed information about the size and shape of individual parts of the brain, including features of the frontal lobe that are known to differ between apes, Australopithecus, and other Homo species, like Homo erectus and Neanderthals. Homo naledi’s brain was one-third the size of the modern human brain.

Hawks and study co-author Shawn Hurst, a graduate student at Indiana University Bloomington, presented some of the size and structure data at a meeting in April 2017, but the current study includes new comparative data that examines differences between Homo naledi and its Australopithecus cousins — sediba and africanus. 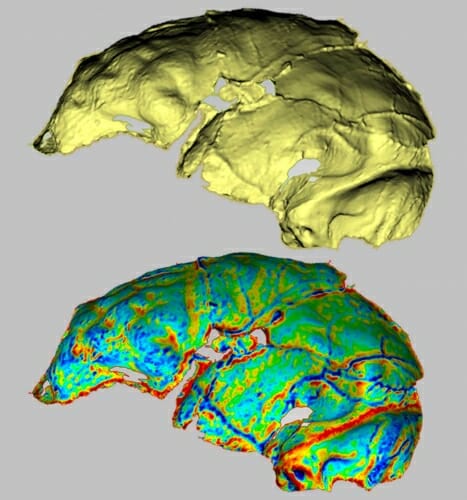 In these cousins and in apes, a groove called the fronto-orbital sulcus is visible. In humans and other Homo species, this feature isn’t there, because two neighboring areas of the frontal lobe have expanded, partly covering over another area known as the insula. The best-preserved endocast from Homo naledi also lacks evidence of the fronto-orbital sulcus and mirrors the human form despite its small size.

A study published by another group last year showed that apes have more human-like brain features than scientists originally understood, but Hawks says the new study provides solid evidence that there are still differences in frontal lobe structures between apes and members of the genus Homo, including Homo naledi.

“When you look at human versus chimpanzee brains and their superficial similarities, it’s hard to identify these grooves in humans,” he explains. “But if you turn it to look at the bottom of the brain, you see they’re not similar at all. We’ve presented these images with the curvature highlighted to show this is actually where these grooves are and what the curvature is … When you look at this, there is no way to orient it in a way that’s equivalent to chimpanzees.”

The virtual models also suggest that Homo naledi may have had an asymmetrical brain. This is known as petalia, in which the two halves of the brain differ in size. For instance, the right frontal pole and left occipital lobe (in the back of the brain) are often larger and shifted forward and backward, respectively, in some right-handed people.

This asymmetry tends to be more pronounced in larger-brained Homo. However, while the scientists did not have enough fragments to fully assess asymmetry in Homo naledi’s brain, one fragment from the occipital region of the brain suggests it may also have shown human-like petalia.

“Maybe brain size isn’t all it’s cracked up to be.”

To complement the virtual models, Columbia University physical anthropologist Ralph Holloway, the study’s other corresponding author, created physical, latex-based endocasts of Homo naledi based on the scans the team took. Holloway has studied hominin brains for more than 50 years and, as Hawks explains, he has created “an incredible archive of endocasts across the fossil record.”

Before he built his models, Holloway did not believe the structures the virtual reconstructions described could possibly belong to a brain as small as Homo naledi’s, Hawks says.

“He said: ‘This looks very human-like to me and I have only seen this in bigger brains,” Hawks says. But Holloway’s physical models showed the same structural characteristics and were within five milliliters of the volume estimated from the virtual reconstructions.

The study shows that the more complex structural features of brains may not solely be a consequence of size, and it suggests that modern humans, Neanderthals and Homo naledi may have a common ancestor. 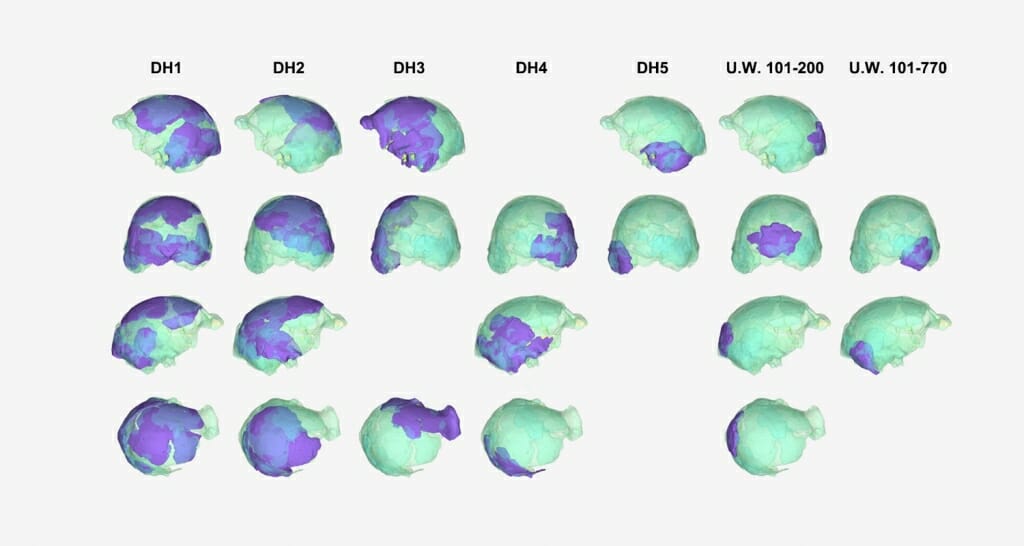 Evidence about the brain shape of Homo naledi comes from many partial skulls. The team used virtual methods to understand how naledi’s brain fits into the big picture. Heather Garvin, Des Moines University

“This is the smallest brain for which we have this clear evidence,” says Hawks. “Having big brains didn’t make our brains this way.”

The study cannot answer what these structures might have meant in terms of Homo naledi’s intelligence and behavior, though the features have been associated in other species with tool use, language and social behavior.

Homo naledi may have been burying its dead, a conclusion the research team reached after excavating a large assemblage of specimens from the Rising Star Cave, and it was contemporary with early humans who were making stone points and even using pigments. Or perhaps that was Homo naledi, too.

“What is brain size about?” Hawks ponders. “We don’t think we can conclude it means nothing or conclude we know much about (Homo) naledi’s function.”

For Hawks, the findings present even more questions about a time in human history where much still remains to be explored. “What do we say about Africa in the time that Homo naledi was there?” he asks. “What does it tell us about hominids and diversity and what it was about?”

He also says to stay tuned.

Other study authors include Heather Garvin from Des Moines University, P. Thomas Schoenemann from Indiana University Bloomington, William Vanti from Columbia University and Lee Berger from the University of the Witwatersrand.