Helmkamp, go-to guy when chips are down, to retire as associate dean of students

The assignment came with no road map or template.

It was 2007, and an undergraduate had just shot and killed 32 people at Virginia Tech. Colleges across the country hastened to implement measures that would identify troubled students and defuse potentially violent situations.

At the University of Wisconsin–Madison, Dean of Students Lori Berquam turned to a trusted aide, Associate Dean Kevin Helmkamp, to take on the difficult, uncharted work.

“He was a natural for it — a critical thinker with a calm demeanor and a thoughtful approach,” she says.

As Helmkamp prepares to retire Aug. 15, colleagues say his efforts to make the campus safer will be among his legacies. The work, they say, embodies what made him so valuable during his nearly 30 years at UW–Madison. 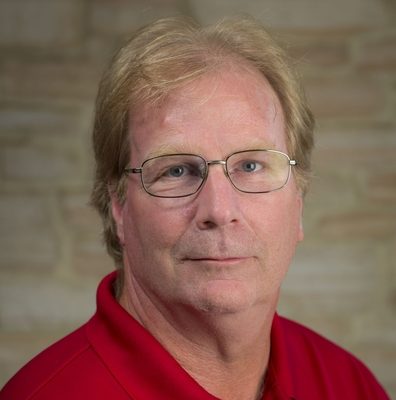 “Kevin always took on tasks outside the routine that served the university well,” says Assistant Dean Kipp Cox. “He always did what was asked of him, even if it wasn’t in his job description or even part of the profession.”

Often those tasks were some of the thorniest on campus, like complex investigations into student conduct code violations.

“We would joke that he must have a white horse stored somewhere at Bascom Hall, because people expected him to ride in on one,” says Assistant Dean Tonya Schmidt, director of the Office of Student Conduct and Community Standards.

The work came with a heavy burden of responsibility, but Helmkamp’s affection for students and his desire to see them succeed kept him focused, according to colleagues. A bone-dry wit also leavened his work, although it was buried beneath an exterior that Helmkamp acknowledges could come off as a bit gruff.

“I don’t think the term ‘happy-go-lucky’ has ever collided in the same sentence with my name,” he says.

More on that in a minute.

A native of northeast Indiana, Helmkamp spent his first 17 years at UW–Madison in the Division of University Housing as an assistant director of residence life. It was a period of major philosophical change for housing on campus. Residence halls became academic hubs, not just social centers. The focus shifted from developing a small group of student leaders to fostering a sense of community where every student felt empowered to lead.

“Kevin played a key leadership role in these critical changes,” says Kay Reuter-Krohn, who retired as director of residence life in 2013. “He always had a really strong sense that we’re here to help all students make the most of their opportunities. It was a core value for him, one he took with him to the Dean’s Office.” 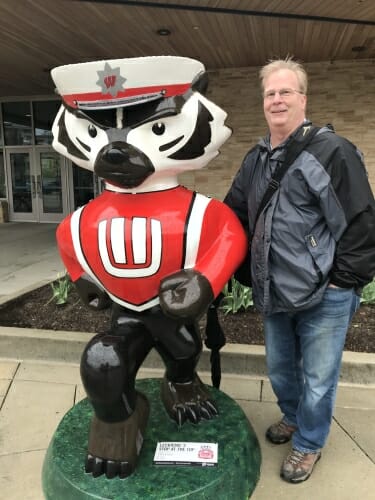 Kevin Helmkamp, pictured with one of the Bucky on Parade statues, says he loved being an associate dean. “I’m a good No. 2 guy, a good behind-the-scenes guy. My motto was always, ‘Get the job done.’” Photo: Tonya Schmidt

As an associate dean of students since 2006, Helmkamp has taken on duties as varied as leading the effort to establish student protest guidelines to helping shape the Our Wisconsin community-building workshops for new students in university housing.

He successfully pushed in 2016 for the Office of Student Conduct & Community Standards to be split from the Dean of Students Office. The restructuring was needed, he says, to differentiate for students the distinct roles of each.

“I never liked that the same people saying, ‘Come to us for help’ were also the ones who could suspend or expel a student from the university,” Helmkamp says.

Following the Virginia Tech tragedy, Helmkamp co-led with UW Police Capt. Karen Soley the committee that developed the current campus threat intervention team. The team meets every other week and assesses 60 to 70 cases each year in which threats are posed by students, faculty, staff, visitors or people unaffiliated with the university.

The effort led to the hiring in 2013 of former FBI agent Chris Cole in the newly created role of director of threat intervention services. Before Cole’s hiring, any intervention with a student fell to Helmkamp. If, for instance, a student posted something on Facebook or Twitter that could be interpreted as threatening, Helmkamp sat the student down for a candid conversation.

“The direct approach always worked best for me,” Helmkamp says. “I was able to bring a sense of gravitas to the conversations in a way that helped students understand the seriousness of the incident.”

He’d also make a point of shaking their hand and reminding them that they had given him their word that their behavior was going to change. “That bit of old school served me very well over the years,” he says.

“I can’t tell you the number of times Kevin was able to de-escalate a situation and calmly see a person through a crisis. And he always did it quietly, kindly and respectfully.”

Helmkamp had a gift for working with struggling students, Cole says.

“There were times when students weren’t able to identify what was in their best interests, but Kevin was able to help them see it,” Cole says. “His ability to connect with students was really special.”

Says Berquam: “I can’t tell you the number of times Kevin was able to de-escalate a situation and calmly see a person through a crisis. And he always did it quietly, kindly and respectfully.”

Helmkamp describes himself as an introvert and says his personality is “very atypical” for student affairs.

“I’m not the most demonstrative person,” he says. “I will give out one hug per year. I don’t smile a lot, although that doesn’t mean I’m not happy. There was, I think, a certain intensity about me that probably created a greater sense of dread than I intended.”

“He’s way more sensitive than he lets on, and it shows up in fantastic ways, whether that’s mentoring students or being an incredibly supportive and loyal supervisor,” she says. “Once you break down the exterior, he’s just a big teddy bear.” 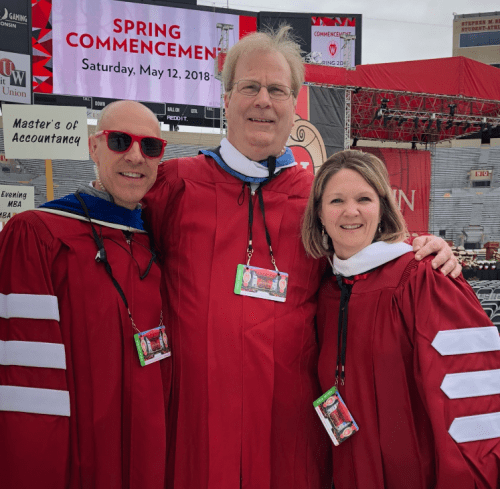 Colleagues hate to see Helmkamp go, yet they feel strongly that he deserves a long and happy retirement.

“Only a few can know the weight of the decisions Kevin made every day,” says Argyle Wade, who has worked alongside Helmkamp in the Division of Student Life since 2007, “He’s one of a kind, and I’ll miss him greatly.”

Wade will become interim dean of students when Berquam steps down Aug. 15. There is appropriate symmetry in Berquam and Helmkamp leaving campus on the same day. They have known each other since 1985, when Helmkamp, then at UW–La Crosse, hired Berquam for a position in residence life. Berquam later brought him onto her team in the Dean’s Office.

“He has always been my go-to person,” she says. “I look at my tenure as really being successful because of Kevin and what he brought to the associate dean role. He contributed to the division in a way that was unique to him but also exactly what the campus needed at the time.”

Helmkamp, 61, says he’s retiring at an age when “I think I have a reasonable chance of getting healthy and enjoying the next 15 years.”

“I loved being the associate dean of students,” he says. “There were many a day I thought, I can’t believe this happened to me. I have had the good fortune to work with so many outstanding staff and students. Their dedication to the mission of Student Life and Housing will be the memory I hold on to in retirement.”

Helmkamp’s wife, Sheryl, works for the Oregon School District. His younger son, Jordan, is a sophomore at the University of Notre Dame, his father’s undergraduate alma mater. His older son, Justin, an alumnus of UW–La Crosse, is a wilderness therapy guide in the Pacific Northwest.

After retiring, Helmkamp plans to disappear into the woods with Justin for a few months of hiking before deciding his next steps.

“I want my biggest decision on those days to be Three Musketeers or Snickers,” he says.