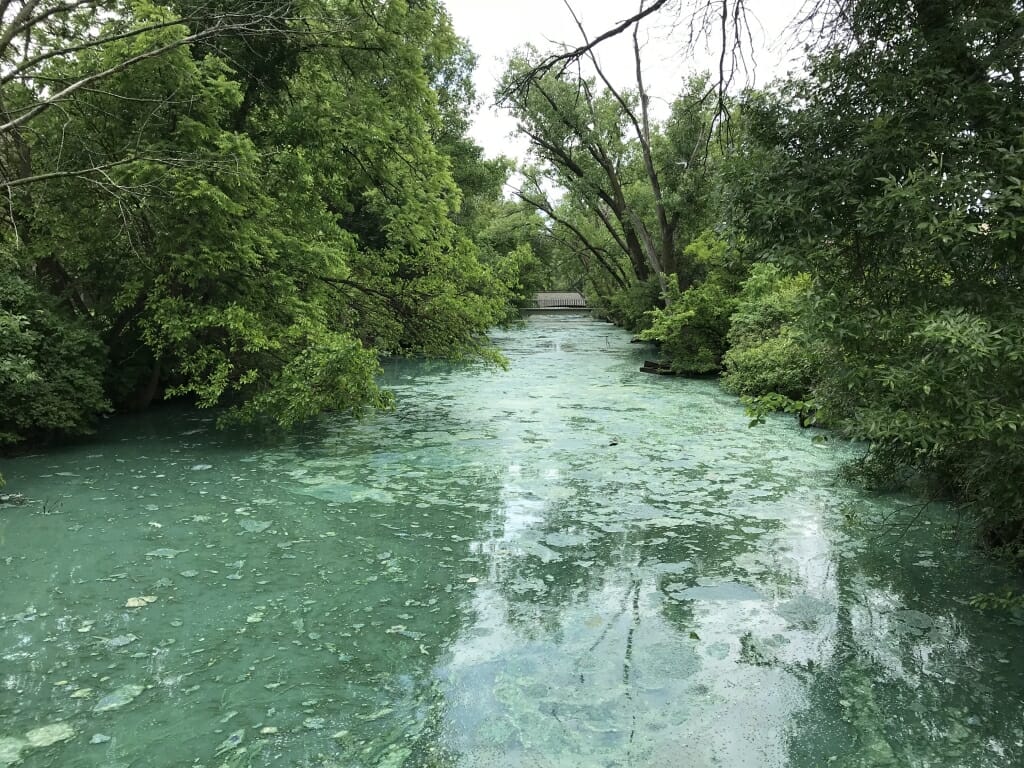 An algae bloom began to spread across Lake Mendota on June 6, 2018, prompting beach closures in affected areas. It led to foul-smelling, discolored water in places like Willow Creek on the UW–Madison campus, pictured here, spreading into the delta where the creek drains into Lake Mendota. Algae blooms can be prompted by phosphorus and other urban contributors to local waterways. Photo by Carrie Eaton, UW–Madison

On June 6, 2018, the Center for Limnology reported that a toxic algae bloom had begun to spread across Lake Mendota. It quickly led to the closure of beaches around Madison’s largest lake.

It also coincided with the launch of a new, four-year effort by Dane County, called Suck the Muck, designed to literally suck a century’s-worth of phosphorus from 33-miles of streams that feed the county’s lakes.

Phosphorus, a nutrient found in the manure applied to agricultural fields, makes its way to Wisconsin waters (and waterways elsewhere) in runoff following rain storms. When the weather is warm, it can lead to the foul-smelling water and toxic algae blooms that plague lakes like Mendota, which is situated in an agricultural landscape. 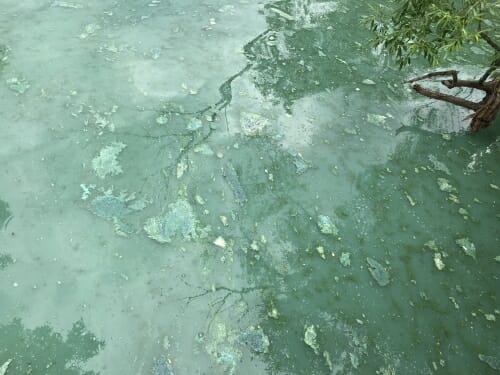 A new study shows that an increase in high-intensity rain storms interacts with manure applied to agricultural fields to make exacerbate phosphorus runoff, which can lead to toxic algae blooms. Photo by Carrie Eaton, UW–Madison

This runoff may be getting worse, according to a recent study from researchers with the Water Sustainability and Climate Project at the University of Wisconsin–Madison. With a changing climate, the frequency of high-intensity rain events is on the rise. These storms bring heavy rains over a short period of time and exacerbate phosphorus runoff from manure-covered agricultural fields, more so than scientists expected.

“Both things are bad for water quality – too much manure is bad and too many intense storms are bad, too,” says lead author of the study in Environmental Research Letters, Melissa Motew. “This is a story about how one problem really compounds another problem.”

Indeed, the Lake Mendota algal bloom came on the heels of the second-wettest May in Madison’s recorded history, and its eighth warmest. The National Weather Service reported that May 2018 was the wettest on record for the contiguous United States.

But Motew didn’t start out asking how heavy storms and manure interact synergistically to affect water quality. It was while studying legacy phosphorus in soils ­– the accumulation of the nutrient over time – that she and the research team noticed something interesting in the data.

“We knew that heavy rain transports a lot of phosphorus off of a field and in 2014, (co-author Stephen Carpenter, emeritus professor and director of CFL) found that a relatively small number of rain events each year were delivering the majority of phosphorus to the lakes,” she explains. “We happened to notice that it seemed like when we had periods of heavy rainfall we were seeing worse water quality than we expected. It prompted us to set up this study.”

Climate change is bringing more intense rainfall across the U.S., particularly in the Midwest and Northeast. The 2014 study from Carpenter and colleagues showed that 74 percent of the phosphorus load in Lake Mendota is now delivered across just 29 days each year, and a 2016 study from scientists at Marylhurst University in Oregon and UW–Madison showed that annual precipitation in the Yahara watershed, which includes Lake Mendota, increased by 2.1 mm each year between 1930 and 2010.

Using simulation models, Motew and the study team asked how more extreme rain events might interact with manure-and-fertilizer phosphorus supply on croplands to affect runoff at the level of an individual lake and the streams that feed it. That is, what happens when a given amount of rain falls on a field over the course of two hours instead of 24 hours?

“The model lets us scale up and make interesting observations from the scale of one field to the entire watershed,” she says. “Models let us home in and study the process of how phosphorus moves in great detail.”

“This result also has wide-reaching implications because the synergistic relationship will likely be present in many agricultural watersheds around the world, where livestock and surface water co-exist.”

It took into account the real-life practices of farmers in the watershed – including their typical fertilizer and manure applications and tillage practices, the amount of phosphorus already stored in the surface layers of the soil, and the composition of the land around Lake Mendota. More than half of the land surrounding it is agricultural.

Motew found that dissolved phosphorus – the kind found in manure, as compared to other fertilizers and that found in soil – combined synergistically with heavy rain events to increase the amount of phosphorus running off into Lake Mendota and its streams.

“This puts us at even greater risk of worsening water quality,” says Christopher Kucharik, study co-author and Motew’s former graduate advisor. “This result also has wide-reaching implications because the synergistic relationship will likely be present in many agricultural watersheds around the world, where livestock and surface water co-exist.”

Phosphorus is a critical nutrient for living organisms like crops. But what it does on land, it also does in water: encourages growth of organisms like plants and algae. When they die, these organisms fall to the bottom of an affected waterway, decomposing and consuming oxygen. This kills wildlife and encourages the growth of cyanobacteria, the organism behind toxic algae blooms. In some parts of the country, it can lead to dead zones, like in the Gulf of Mexico.

Farmers in Dane County and elsewhere are already applying less manure and doing so more precisely, Motew says, and she is hopeful these strategies will help to reduce phosphorus runoff from their croplands.

Motew, who is now a research fellow at The Nature Conservancy, also thinks farmers should be a part of continuing efforts to improve water quality. “We need to partner more with farmers so we can not only improve our own research by using better data, but so we can work together and build on their ideas, too.” she says. “They know the problems up-close-and-personal and can provide insights we haven’t considered. We as scientists can help explore where those insights may lead.”

Motew adds: “Farmers are key to solving the problem, even though they are frequently blamed. We all need to take responsibility for our food system and find ways to support farmers in better manure management.”