If you listen to its director, Google’s Madison office was founded in 2008 through a combination of good timing, great audacity and a world-class concentration of computer scientists on the University of Wisconsin–Madison campus.

The question was simple: Would Google be interested in starting an office in Madison? The time was 2007, just before the business contractions of the Great Recession, and UW–Madison electrical and computer engineering Professor James Smith and his former student James Laudon were both thinking about next steps. 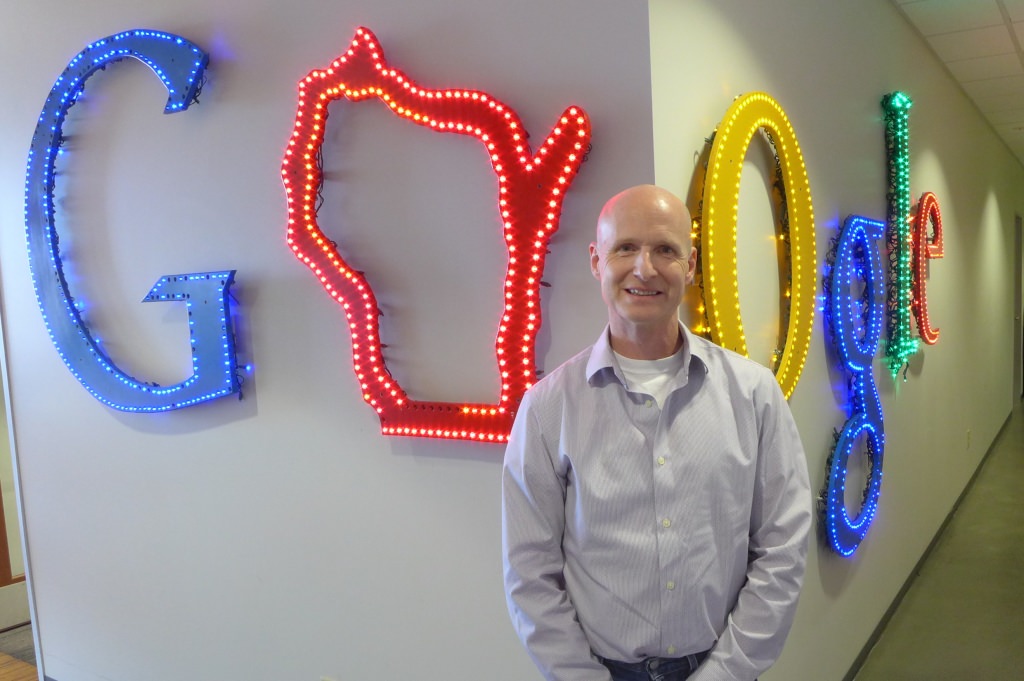 James Laudon is manager of Google’s outpost on East Washington Avenue in Madison. Signs in the office suite remind employees that although the are employed by a Silicon Valley giant, they live and work in Wisconsin. Photo: David Tenenbaum

“Jim wanted to retire but not retire,” says Laudon. “He wanted to leave academia but was still interested in research, and we wondered, who might be some companies to work with? Google quickly rose to the top as a really interesting place.” The pair contacted the company through an acquaintance.

Laudon, a native of Plover, Wisconsin, had learned programming with the antique language Fortran and the archaic technology of punch cards. After getting a bachelor’s degree at UW–Madison, he got a doctorate in computer architecture at Stanford. By 2007, he was working solo in Madison for Sun Microsystems and was getting tired of being a lone wolf.

The two learned that the search giant Google was looking to continue expanding from Silicon Valley to places with less competition for engineering talent. “They were exploring options, we interviewed with them and it worked out,” Laudon says.

Laudon directs 40 employees in sunny, screen-dense offices on East Washington Avenue in Madison. “We work on, what can I say? Large-scale distributed systems, storage systems, networking systems. How do you manage the system that stores whatever it is that needs to be stored, whether it’s indexing for the internet or everyone’s photos? We work on the systems that manage all of that data.”

“We wondered, who might be some companies to work with? Google quickly rose to the top as a really interesting place.”

A decade ago, Google was already running multiple data centers, aka server farms, but today their growth is being fueled via “cloud computing,” with Apple, Microsoft, Google and especially Amazon in the lead. One can speculate that the Madison office is working on the cloud, but nobody is saying for sure.

Google Madison is an all-engineering site, Laudon says. “People who go into engineering in general like to work on challenging problems, and they end up building something to tackle those challenges.”

About two-thirds of the office’s hires are UW–Madison graduates, and the UW System accounts for another significant share, Laudon says. “There are minimum requirements that all our engineers must meet: a computer science or related degree; they have to be really smart people who are passionate about what they are doing, who work well in a team, have good communication skills, and are really effective in delivering.”

Google would not be in Madison without UW–Madison, Laudon says, and a monthly series of research talks by UW computer students is a good source of interns. Faculty research proposals and research talks on campus are another way to maintain the informal relationship.

“We tend to get a lot of employees from UW–Madison, graduates who want to stay in the area.”

“It’s difficult to find the right people, but we manage to fill all the positions,” Laudon says. “We tend to get a lot of employees from UW–Madison, graduates who want to stay in the area. But we have also pulled some people in from elsewhere.”

Many of those who have moved to Madison for the job, like Laudon himself, already had ties to the area.

The job requires massive screen time, but Laudon says motivation was not an issue.

“Our people are passionate. We have some really exciting projects, and we have a lot of the technical complexity that can motivate people. And what a lot of people like about this job is the impact: Your system is behind some Google service. Even though your name is never on it, the cool things that Google is doing are used by billions of people.”