The rear of the Bakke Recreation & Wellbeing Center, toward Lake Mendota. Rendering by Kahler Slater/HOK

The facility features an indoor track. Rendering by Kahler Slater/HOK 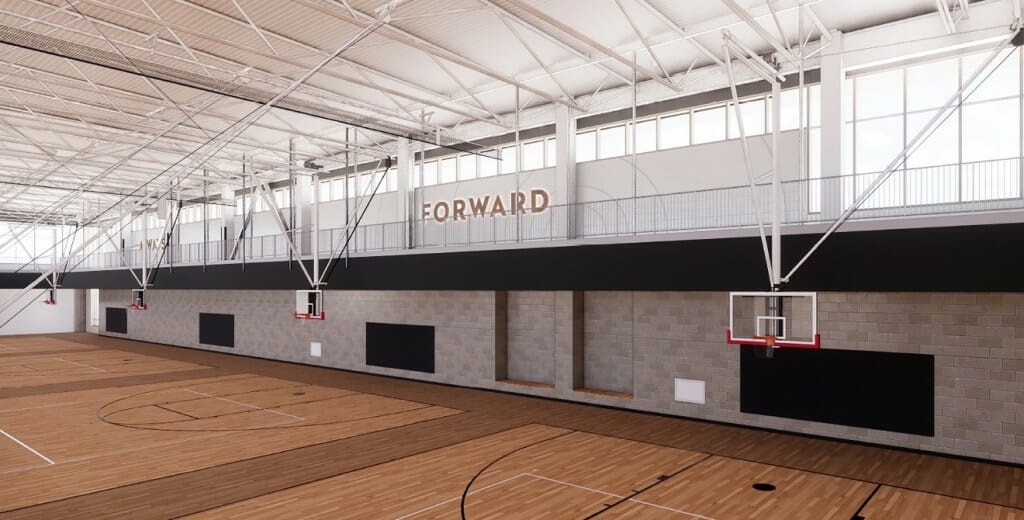 The facility will have eight basketball courts. Rendering by Kahler Slater/HOK 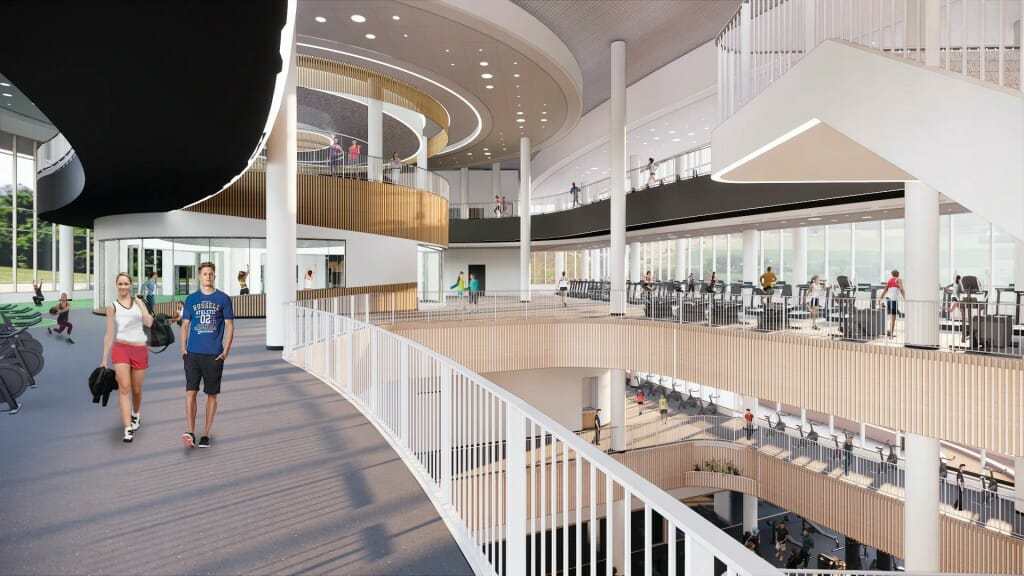 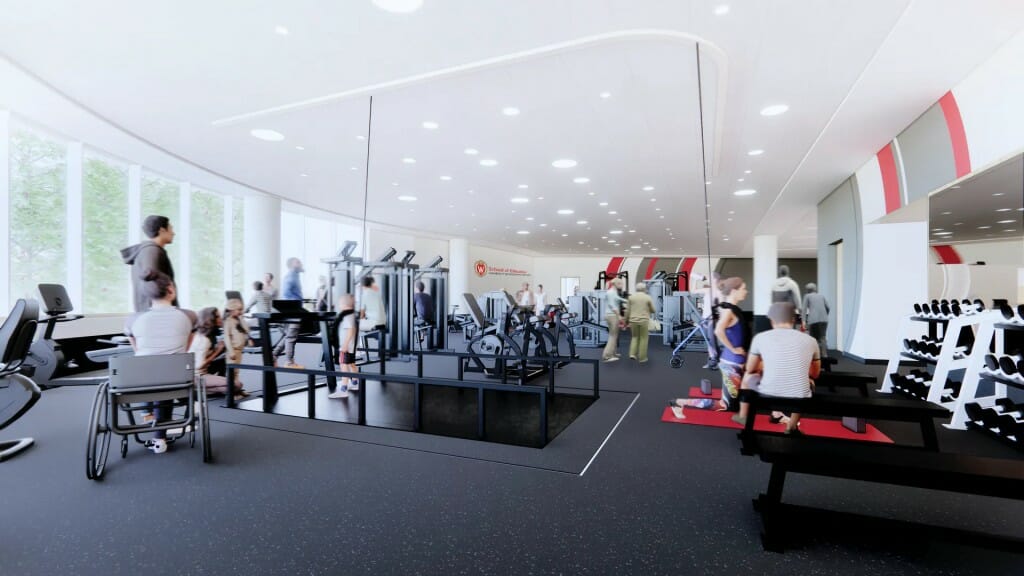 The facility will have multipurpose rooms and sports simulators. Rendering by Kahler Slater/HOK 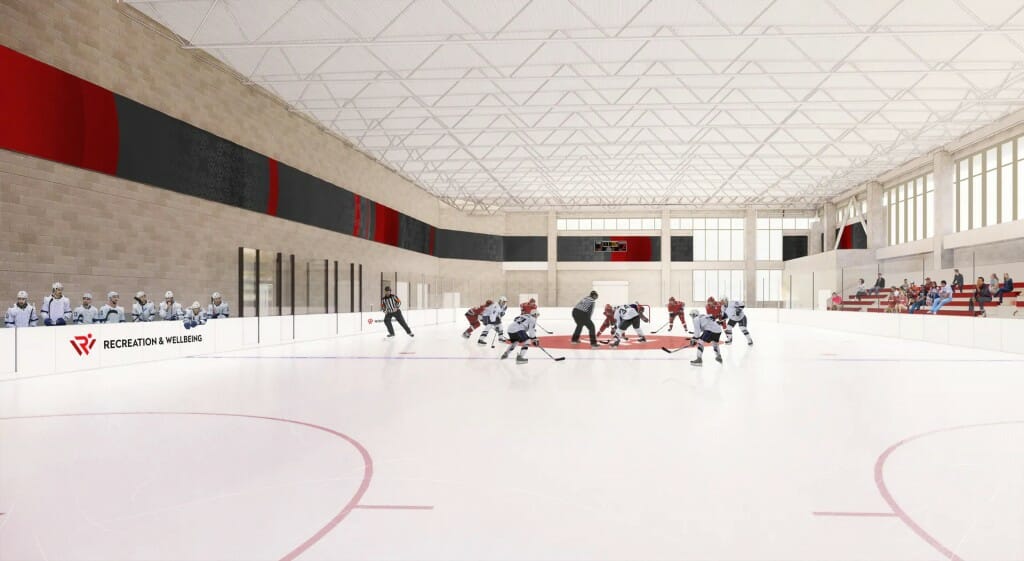 The new facility will include the Sub-Zero Ice Arena. Rendering by Kahler Slater/HOK

A rendering of the exterior of the Bakke Recreation & Wellbeing Center. Rendering by Kahler Slater/HOK

A new state-of-the art facility to support student and community health will nearly triple the size of the former Natatorium, serving more students and community members with recreational and well-being services.

The $113.2 million facility will be named the Bakke Recreation & Wellbeing Center.

The gift and details were announced today in a ground-breaking event on the site, where the building is already taking shape. Construction started in spring 2021 and is expected to be complete in 2023.

The Bakke Recreational & Wellbeing Center will be operated by UW–Madison’s Recreation and Wellbeing in Student Affairs.

In addition to housing a 25-yard recreational pool, the facility will include the Sub-Zero Ice Arena, an indoor track, well-being services such as massage therapy and meditation, and a teaching kitchen for nutrition programs. The building complements the Nicholas Recreation Center, which opened on the southeast side of campus in 2020. 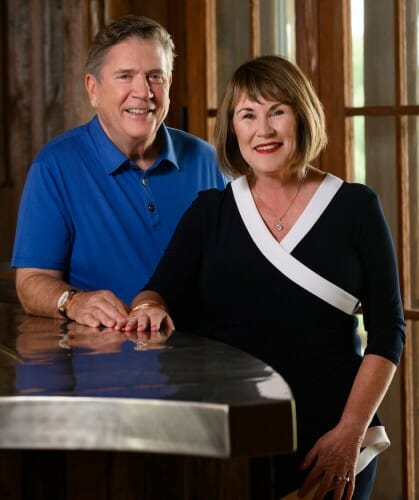 Jim and Sue Bakke provided the lead private gift of $20 million to support the Bakke Center. Jim is a UW–Madison alumnus and president and CEO of Sub-Zero Group, Inc., a luxury appliance manufacturer founded in Madison in 1945. Sue is a 1977 graduate of Boston University in physical therapy.

The Bakke family has supported many areas of campus over the years, including scholarships and fellowships in the Wisconsin School of Business and contributions to Athletics, the College of Engineering, the School of Human Ecology, and the School of Medicine and Public Health.

“We were inspired by the vision of a facility that could expand upon the incredible resource the Nicholas Recreation Center has come to be,” Jim Bakke says. “We believe it is vital to support the mental and physical health of both UW students and the wider community.”

“We believe outstanding student recreation spaces are critical to attracting the best students to UW–Madison,” Sue Bakke adds. “We were also motivated by the community access and especially the vital work done in the Adapted Fitness program.”

The facility also will be funded by $76.6 million in student segregated fees, an additional $13.6 million in private gifts, and $3 million from donors and campus for the Adapted Fitness Program. In a 2014 Associated Students of Madison referendum, students approved an increase in segregated fees to fund Rec Well’s master plan, which included the Bakke Center, along with the Nicholas Recreation Center and two outdoor recreational fields.

“The Bakke Center is going to re-define what a center for recreation and wellbeing can be,” Chancellor Rebecca Blank says. “It will be a space that welcomes the public with community memberships and events, camps and clinics, cooking classes, and 1:1 nutritional counseling. And there is no question that the Sub-Zero Ice Arena is going to be one of the hottest spots on campus!” 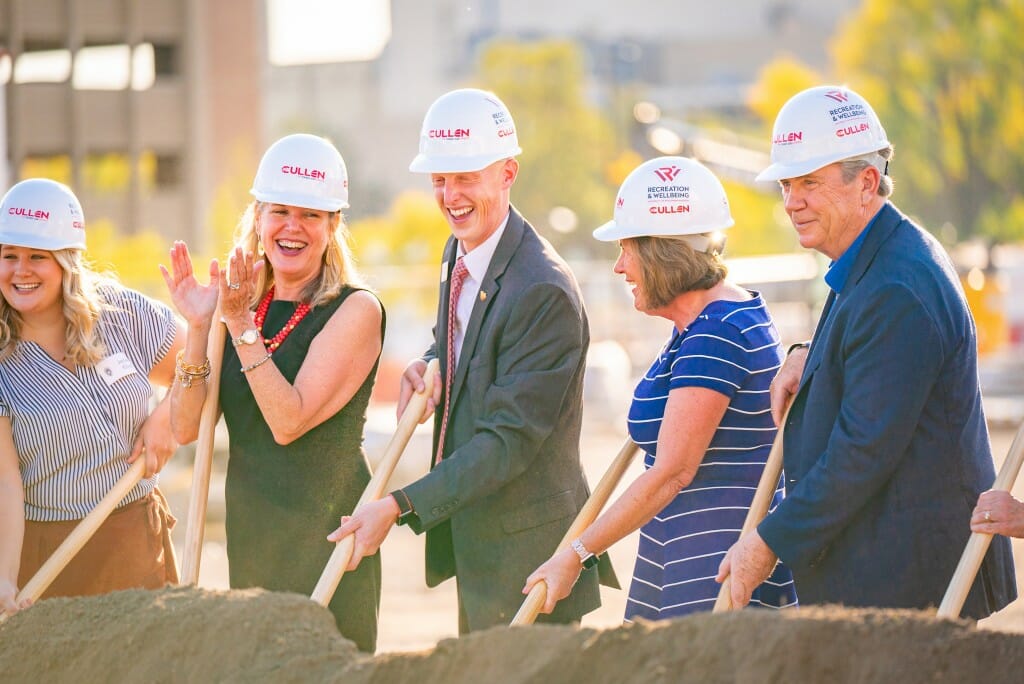 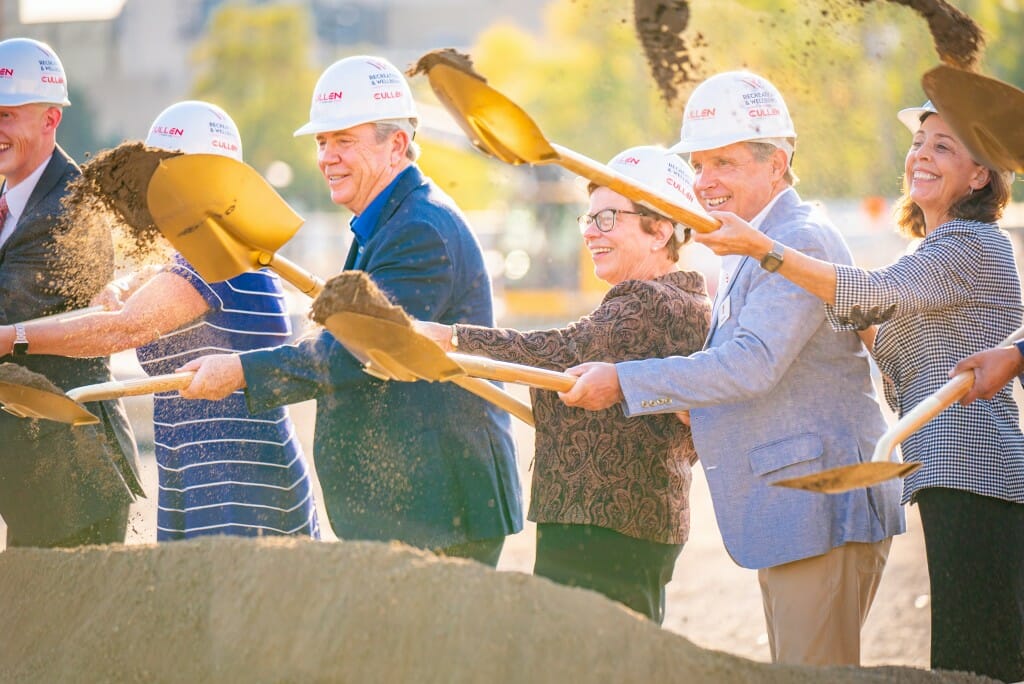 Chancellor Rebecca Blank vigorously throws a shovel full of dirt, as does Jim Bakke, to her right. Photo by Powers Spees 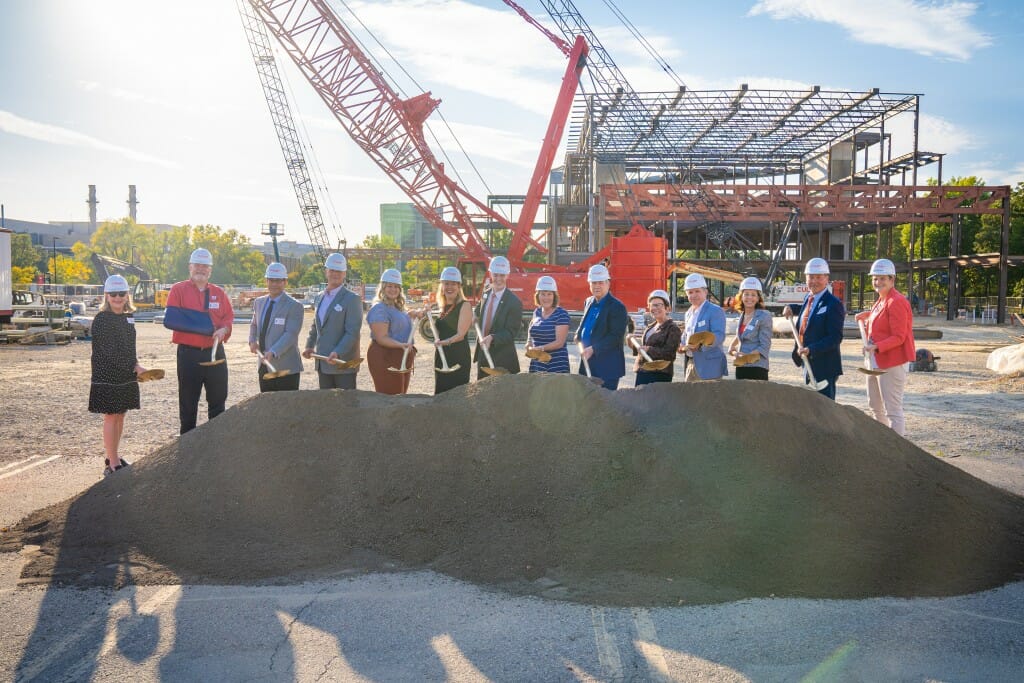 Members of the Bakke family and the UW–Madison community help break ground for the new recreation facility. Photo by Powers Spees 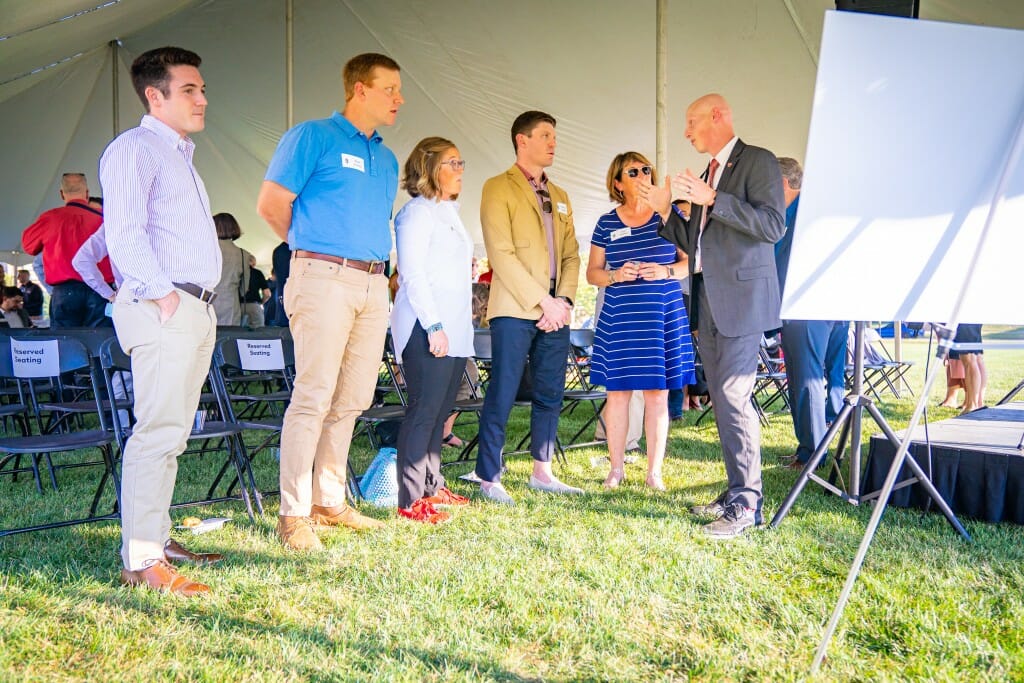 The Adapted Fitness program, housed in the School of Education’s Department of Kinesiology, personalizes physical activity programs to community members with a variety of disabilities. The program also provides academic coursework and service-learning opportunities for UW–Madison students to learn how to best serve these clients.

A generous gift from alumni Mike and Ginny Conway, along with support from campus, assured that Adapted Fitness will have 5,000 square feet of dedicated space in the Bakke Center, enabling the program to expand beyond its current limits.

About the Bakke Recreation & Wellbeing Center

“The Bakke Recreation & Wellbeing Center was designed for people of all physical abilities and fitness levels,” says Jackie Elliott, a spring 2021 graduate who served on the project’s design team. “Whether a student is walking into their first group fitness class or their 500th lift, they’ll have a space where they can learn and grow here.”

Since the Ho-Chunk people first began arriving in the region at least 12,000 years ago, they perfected the skills and technologies that have become the activities we recognize today as archery, canoeing, and snowshoeing, as well as team sports such as lacrosse. To acknowledge and celebrate the long tradition of health and recreation activities in the Teejop region, Director of Recreation & Wellbeing Aaron Hobson announced a partnership with Ho-Chunk artist Ken Lewis and Ho-Chunk leaders to design a sculpture that will serve as a space for reflection and celebration of the Ho-Chunk people near the building. The design will be unveiled at a later date.

UW–Madison occupies ancestral Ho-Chunk land, a place the Ho-Chunk call Teejop (Dejope, or Four Lakes). In an 1832 treaty, the Ho-Chunk Nation was forced to cede this territory. The Our Shared Future heritage marker at UW–Madison recognizes this history.