A University of Wisconsin–Madison researcher and his collaborators at the University of California, San Francisco have repurposed the gene-editing tool CRISPR to study which genes are targeted by particular antibiotics, providing clues on how to improve existing antibiotics or develop new ones.

Resistance to current antibiotics by disease-causing pathogens is a growing problem, one estimated to endanger millions of lives and cost over $2 billion each year in the U.S.

“What we need to do is to figure out new weaknesses in these bacteria,” says Jason Peters, a UW–Madison professor of pharmaceutical sciences, who developed the new system. 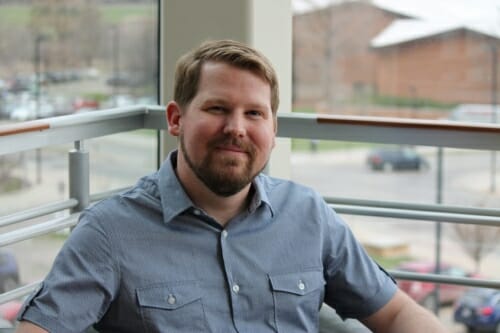 The technique, known as Mobile-CRISPRi, allows scientists to screen for antibiotic function in a wide range of pathogenic bacteria.

Using a form of bacterial sex, the researchers transferred Mobile-CRISPRi from common laboratory strains into diverse bacteria, even including a little-studied microbe making its home on cheese rinds. This ease of transfer makes the technique a boon for scientists studying any number of bacteria that cause disease or promote health.

Peters worked with Carol Gross, Oren Rosenberg and other colleagues at UCSF and other institutions to design and test Mobile-CRISPRi. The system reduces the production of protein from targeted genes, allowing researchers to identify how antibiotics inhibit the growth of pathogens. That knowledge can help direct research to overcome resistance to existing drugs.

The researchers published their findings Jan. 7 in the journal Nature Microbiology. They took advantage of the increasingly popular molecular tool CRISPR, but in a unique way.

“Most people, when they think about CRISPR, think about gene editing,” says Peters, who earned his doctorate at UW–Madison and recently joined the School of Pharmacy as an assistant professor. “But that’s not what I do.”

Normally, the CRISPR system gets targeted to a gene where it cuts the DNA in two. The gene can be edited while the cell repairs the damage.

But Peters and his collaborators worked with a defanged form of CRISPR known as CRISPRi. CRISPRi has been engineered to be unable to cut DNA. Instead, it just sits on the DNA, blocking other proteins from gaining access to and turning on a particular gene. The result is lower expression of the gene and a reduced amount of the protein it codes for.

“Most people, when they think about CRISPR, think about gene editing,” says Peters. “But that’s not what I do.”

The researchers showed that if they decreased the amount of protein targeted by an antibiotic, bacteria became much more sensitive to lower levels of the drug — evidence of an association between gene and drug. Thousands of genes at a time can be screened as potential antibiotic targets this way, helping scientists learn how antibiotics work and how to improve them.

To make CRISPRi mobile, the researchers developed methods to transfer the system from common lab models like E. coli to disease-causing species, which are often harder to study. Peters’ team turned to one of the natural ways bacteria link up and exchange DNA, a kind of bacterial sex called conjugation. Former UW–Madison Professor of Genetics Joshua Lederberg discovered conjugation, which earned him a Nobel Prize in 1958.

“You basically mix the bacteria together and it happens,” Peters says of conjugation. “It doesn’t get much easier than that.”

Using conjugation, Peters’ team transferred Mobile-CRISPRi to the pathogens Pseudomonas, Salmonella, Staphylococcus and Listeria, among others.

“What that means is that you can now do studies on how antibiotics work directly in these pathogens,” says Peters. “That could give us a better clue about how these drugs work in the different organisms and potentially what we can do to make them better.”

The technique is a boon for scientists studying any number of bacteria that cause disease or promote health — helping direct research to overcome resistance to existing drugs.

The real test of Mobile-CRISPRi’s mobility came from cheese.

As cheese ages, it curates its own landscape of microbes. Scientists are just starting to investigate the immense diversity of bacteria and fungi on cheeses, which contribute to their complex flavors. One of those bacteria, Vibrio casei, was found on the rind of a French cheese in 2010 by Peters’ collaborator Rachel Dutton of the University of California, San Diego.

Manipulating genes is simple in established laboratory bacteria such as E. coli, but there is often no way to study genes in bacteria recently isolated from the environment, such as V. casei. But Mobile-CRISPRi was easily transferred into the strain, opening up new avenues for understanding how the bacteria colonizes and helps age cheese. As a proof-of-concept, V. casei suggests that Mobile-CRISPRi should be useful for any number of previously understudied bacteria, both those that harm us and those we rely on.

Now Peters is offering up Mobile–CRISPRi to other researchers to study their germs of choice.

“So now it’s going to be completely available to the community,” says Peters. “Now this gives people a path forward.”