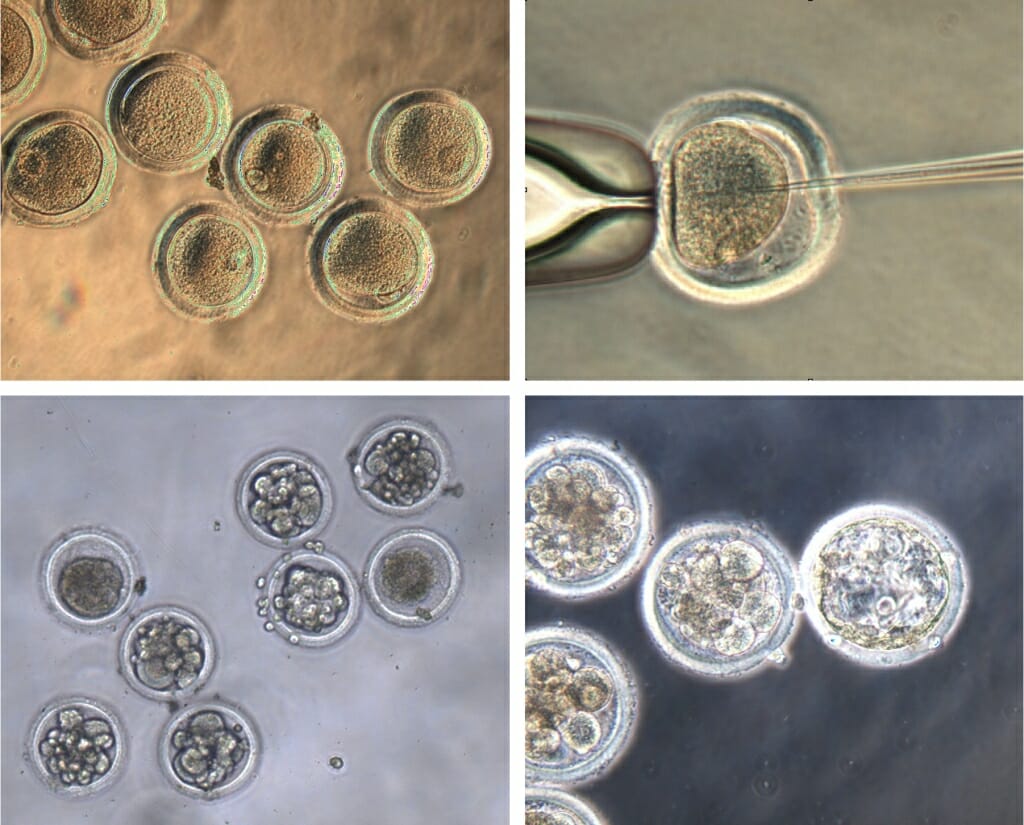 Egg cells harvested from Mauritian cynomolgus macaques (top left) were fertilized (top right) and injected with CRISPR gene editing materials to insert a genetic mutation that cured two men of HIV in the last decade. The growing embryos (developing in the bottom images), if carried to maturity by surrogates, will help researchers study the mutation as a potential treatment for HIV. Courtesy of Golos and Slukvin labs

A gene that cured a man of HIV a decade ago has been successfully added to developing monkey embryos in an effort to study more potential treatments for the disease.

Timothy Brown, known for years as “the Berlin Patient,” received a transplant of bone marrow stem cells in 2007 to treat leukemia. The cells came from a donor with a rare genetic mutation that left the surfaces of their white blood cells without a protein called CCR5. When Brown’s immune system was wiped out and replaced by the donated cells, his new immune system’s cells carried the altered gene.

“This mutation cuts a chunk out of the genome so that it loses a functional gene, CCR5, that is a co-receptor for HIV,” says Ted Golos, a University of Wisconsin–Madison reproductive scientist and professor of comparative biosciences and obstetrics and gynecology. “Without CCR5, the virus can’t attach to and enter cells to make more HIV. So, in Timothy Brown’s case, his infection was eliminated.”

In 2019, a second cancer patient — Adam Castillejo, initially identified as “the London patient” — was cleared of his HIV by a stem cell transplant conferring the same mutation.

“That’s very exciting, and there have been some follow up studies. But it’s been complicated, to say the least,” Golos says.

Between the two transplants came a more infamous application of the mutation, when in 2018 Chinese biophysicist He Jiankui announced he had used the DNA-editing tool CRISPR to write the mutation into the DNA of a pair of human embryos. His work drew criticism from scientists concerned with the ethics of altering genes that can be passed down to human offspring, and he was jailed by the Chinese government for fraud.

The promise of the CCR5 mutation remains, but not without further study. The mutation occurs naturally in fewer than 1 percent of people, suggesting that it may not be associated only with positive health outcomes. An animal model for research can help answer open questions.

Golos, Slukvin and colleagues at UW–Madison’s Wisconsin National Primate Research Center and schools of Veterinary Medicine and Medicine and Public Health employed CRISPR to edit the DNA in newly fertilized embryos of cynomolgus macaque monkeys. They published their work recently in the journal Scientific Reports.

Slukvin’s lab had already established a method for slicing the CCR5-producing gene out of the DNA in human pluripotent stem cells, which can be used to generate immune cells resistant to HIV.

“We used that same targeting construct that we already knew worked in cells, and delivered it to one-cell fertilized embryos,” says Jenna Kropp Schmidt, a Wisconsin National Primate Research Center scientist. “The thought is that if you make the genetic edit in the early embryo that it should propagate through all the cells as the embryo grows.”

Primate Center scientist Nick Strelchenko found that as much as one-third of the time the gene edits successfully deleted the sections of DNA in CRISPR’s crosshairs — base pairs in both of the two copies of the CCR5 gene on a chromosome — and were carried on into new cells as the embryos grew.

“The goal now is to transfer these embryos into surrogates to produce live offspring who carry the mutation,” Schmidt says.

Cynomolgus macaques are native to Southeast Asia, but a group of the monkeys has lived in isolation on the Indian Ocean island of Mauritius for about 500 years. Because the entire Mauritian monkey line descends from a small handful of founders, they have just seven variations of the major histocompatibility complex, the group of genes that must be matched between donor and recipient for a successful bone marrow transplant. There are hundreds of MHC variations in humans.

With MHC-matched monkeys carrying the CCR5 mutation, the researchers would have a reliable way to study how successful the transplants are against the simian immunodeficiency virus, which works in monkeys just like HIV does in humans.

“Anti-retroviral drugs have really positively changed the expectation for HIV infection, but in some patients, they may not be as effective. And they’re certainly not without long-term consequences,” says Golos, whose work is funded by the National Institutes of Health. “So, this is potentially an alternative approach, which also allows us to expand our understanding of the immune system and how it might protect people from HIV infection.”

The animal model could lead to the development of gene-edited human hematopoietic stem cells — the type that work in bone marrow to produce many kinds of blood cells — that Slukvin and Golos say could be used as an off-the-shelf treatment for HIV infection.