What do songbirds and humans have in common? We crave social interaction, and the chemical rewards that flood our brain when we get it.

In a study recently published in Scientific Reports, University of Wisconsin–Madison researchers led by Lauren Riters, professor of integrative biology, found that when songbirds sing during non-mating seasons, it’s because singing releases an opioid naturally produced in their brain —that’s right, a compound with the same biological makeup of the highly addictive painkillers. 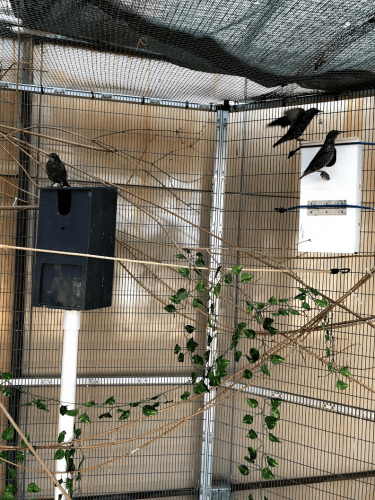 Dosed with the opioid fentanyl, swallows like these would “sing like crazy” — but fall silent when researchers switched off their brains’ opioid receptors. Photo courtesy Lauren Riters

People have naturally-produced — or endogenous — opioids in our brain released in certain situations, like social situations, that make us feel good. That’s why we like hanging out with friends, Riters says.

These naturally produced, feel-good compounds are also why many songbirds like to sing in large flocks, says Riters, after years of careful study.

“Animals — including birds, including humans — we produce our own endogenous opioids, and they reward behaviors naturally, like sexual behavior or feeding behavior,” Riters says. “Studies show that endogenous opioids also make play rewarding. Songbirds learn their songs, and must practice. When we listened to birds practicing in flocks, it almost sounded as if they were playing around with the notes. Darwin even suggested that birds in flocks may be singing for ‘their own amusement.’ So, we thought if singing is a playful behavior, it should involve opioids.” 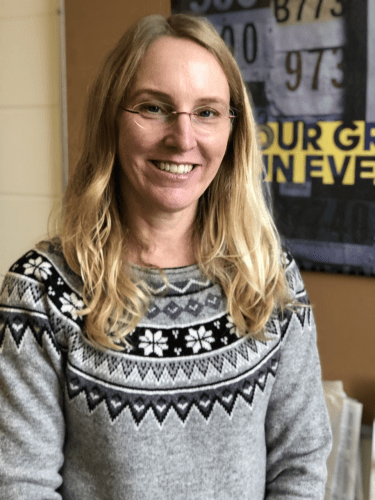 About six years ago, a researcher in Riters’ lab found a way to reduce the resonse of the Mu opioid receptors in European Starlings, a type of songbird. This receptor, a protein on the surface of a nerve cell, controls responses to endogenous opioids, and they wanted to figure out if it might regulate what sounded like playful song in birds.

To put this to the test, they had to develop a method in starlings to measure reward associated with singing. Riters’ team used a method called CPP, a conditioned place preference test, where they trained the birds to associate a certain cage with singing.  Later, when given a choice between two cages, birds showed a preference for the cage that they learned to associate with their own singing behavior. This shows that birds think of singing in flocks as a positive experience, Riters says.

Once they could recognize what the birds looked like in the reward state, they administered tiny doses of fentanyl, a type of opioid that also binds to the Mu receptor, and found the drug made the birds “sing like crazy.” Then they reduced the response of the opioid receptors and found that starlings no longer showed a CPP for song. This shows, Riters says, that endogenous opioids regulate intrinsically-rewarding bird song.

Riters’ team ran tests over 2 years. They set up the experiment in an outdoor aviary where they’d observe the birds. Sometimes, Riters says, it proved challenging, since so many other factors contributed to the birds singing or not. Riters says her team had to make the environment as welcoming and relaxing as possible for the birds. For example, if a hawk landed near the aviary, the songbirds wouldn’t sing because they’d get stressed out.

The results stood out amongst other research, because most studies of starling song involve the mating season and sexual selection, while the new study focused on song outside the breeding season in large flocks, and its connection with endogenous opioids.

She says her results might suggest that, in starlings, endogenous opioid-prompted song is evolutionarily advantageous, because singing in flocks allows them an opportunity to practice their song to prepare for the mating season. It might not be the most beautiful to listen to — Riters likened their chaotic song to freeform jazz — but that’s okay. To them, it’s just a warm-up for when they start looking for a mate.

“When the birds are singing they’re also practicing motor patterns that they will later use in more serious adult contexts,” Riters says. “They’re also learning how to produce a vocalization that gets a social response, and they also learn how to attract a female, for example.”

Riters thinks the release of opioids might also encourage sociable behavior for these songbirds. Humans have endogenous opioids that do just that, and Riters’ research may also have implications for human sociality and even mental health. When humans interact in a social context, like hanging out with friends, their brains also release endogenous opioids, just like the songbirds.

Riters believes birds and mammals share the common ancestor in which these social rewards evolved, so there’s a chance parts of their work can be generalized to humans.

In this case, the importance of sociality to both humans and songbirds cannot be understated. When humans don’t receive enough social interaction, they might become depressed or experience other negative mental health conditions because their brains aren’t producing those endogenous chemicals anymore. For example, people with social anxiety might not want to hang out in social groups, because they might have negative interactions. By studying birds, Riters says, maybe they can find ways to promote positive social interactions.

“We think that studying this kind of gregarious positive social play in songbirds is providing a unique way to come up with new ideas for treatments that might promote positive interactions in humans,” Riters says. “During this pandemic and social distancing, we are missing our flockmates, right? And without contact with our flockmates, without socializing in our groups, I think we’re really deprived of opioid release.”