On Nov. 18, 2017, the National Oceanic and Atmospheric Administration (NOAA) and NASA launched the Joint Polar Satellite System, the first in an advanced series of polar-orbiting weather satellites.

The new satellite, named NOAA-20 after its launch, continues a legacy of providing scientists and citizens across the world free access to the weather data it collects — without restrictions or encryption. 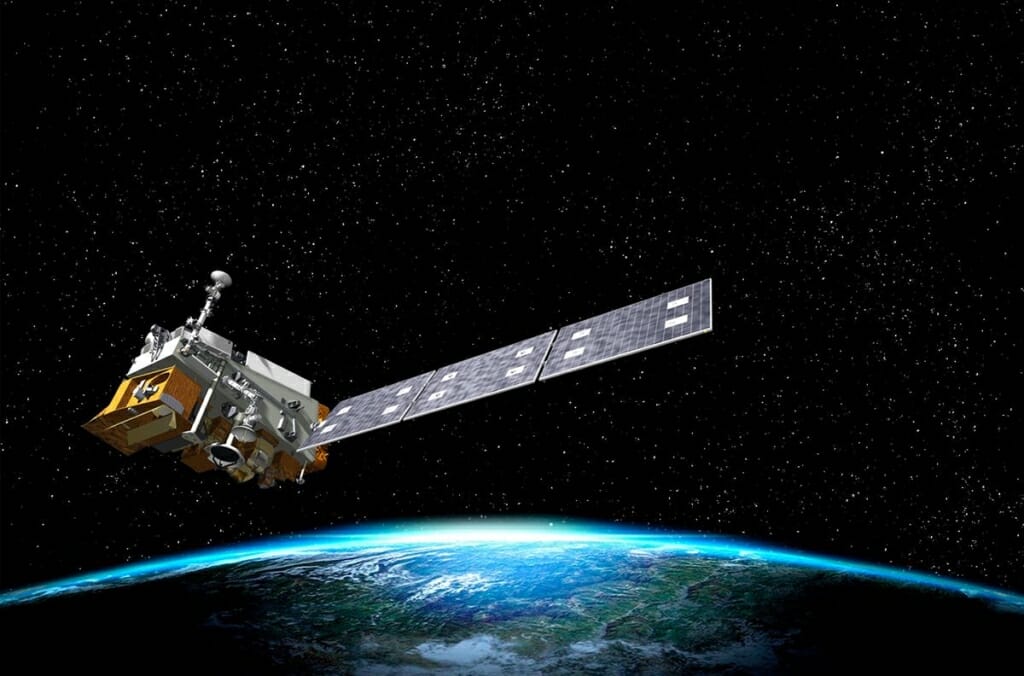 Artist’s rendering of NOAA-20, originally known as JPSS-1, orbiting Earth. It is the first in an advanced series of polar-orbiting weather satellites. NOAA, NASA

For decades, the world meteorological satellite community has operated under a policy of freely shared data. It represents a philosophy and model of cooperation first promoted by the United States and adopted by global satellite agencies, which endure regardless of political or national persuasion.

It’s also a legacy and philosophy with roots that trace back decades to the University of Wisconsin–Madison Space Science and Engineering Center and the Cooperative Institute for Meteorological Satellite Studies.

“We at SSEC and CIMSS are very proud of our part in establishing and promoting this world community approach to better understanding and forecasting weather and climate,” says SSEC scientist Liam Gumley.

In the early 1980s, scientists at SSEC developed some of the first software tools to process data from instruments on NOAA’s early polar-orbiting satellite series known as TIROS.

Today, Gumley specializes in receiving and processing data from satellites like NOAA-20 for use by everyone from other researchers and meteorologists to the general public. 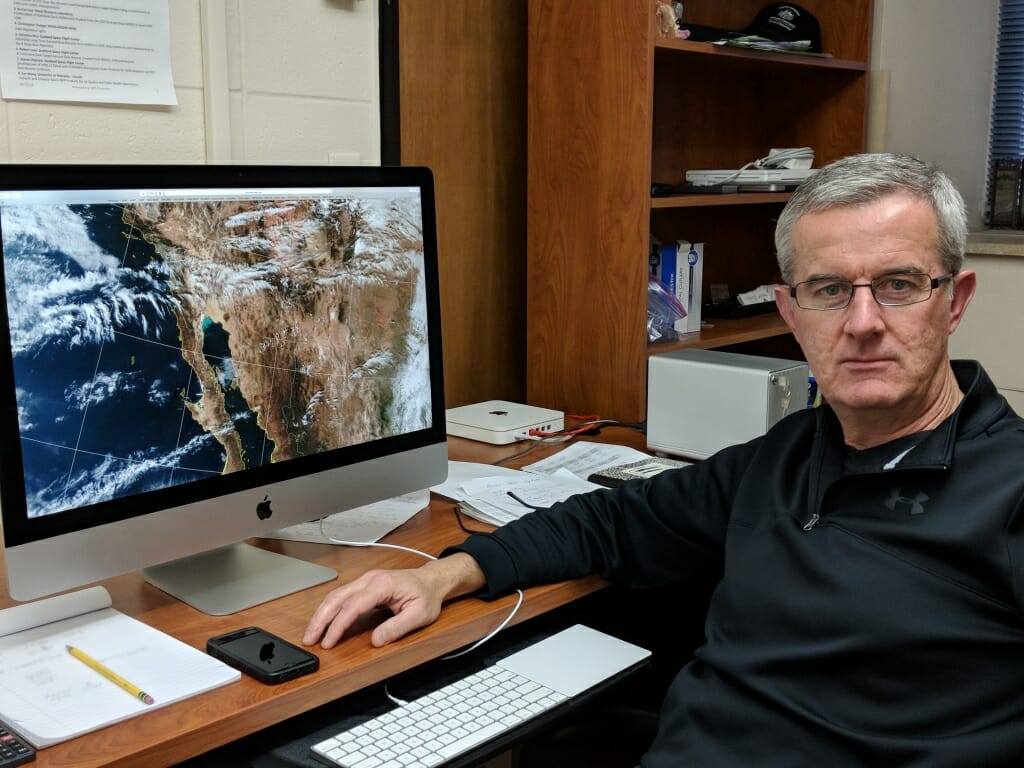 The NOAA-20 satellite was designed to circle the planet 14 times each day. From its low orbit just over 500 miles above the Earth, it collects high-resolution data in consecutive swaths to construct a picture of the planet twice daily.

The satellite joins its predecessor, Suomi NPP (named for SSEC’s founder, the late Professor Verner Suomi), as well as satellites operated by other countries, in making important measurements of Earth’s environment, forming the backbone of the global observing system by delivering detailed information on the state of the planet’s atmosphere, land and oceans.

Gumley and his team, other scientists at SSEC, and scientists worldwide are using NOAA-20’s data in three distinct ways: to improve forecasts; to assist in real-time decision-making; and to analyze global environmental processes over longer periods of time.

Improving forecasts is paramount to scientists like Gumley, who notes that while weather balloons, aircraft, ground-based instruments and other sources provide data that feeds into weather prediction models, “by far, the most important data source is the satellite data,” he says. 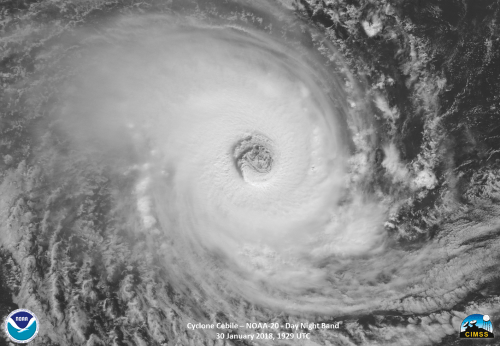 NOAA-20 observed Tropical Cyclone Cebile, and its well-defined eye, in the Indian Ocean on Jan. 30, 2018. Imagery and data from NOAA-20 are preliminary, until the satellite is declared operational. NOAA, CIMSS

Data from these satellites — all of which have infrared and microwave sensors onboard — are crucial to the numerical weather prediction (NWP) at the heart of U.S. forecasting, which harnesses the power of computers to run algorithms that process massive amounts of satellite data.

Data from all United States geostationary and polar orbiting environmental satellites are stored in NOAA’s CLASS archive (Comprehensive Large Array-Data Stewardship System) within about 10 hours of collection. Anyone can visit CLASS and download these data.

However, those with an interest or need to obtain the data sooner — like weather agencies for forecasting purposes — can install an antenna and specific hardware to receive data in real time, directly from the satellite. Within minutes of digitization on the satellite, this direct broadcast data is transmitted to receivers below.

In developing countries, where acquiring and running the proper equipment to directly receive and process the data may be cost-prohibitive, Gumley says that for less than $1,000 they can purchase a small antenna or computer to receive rebroadcasts from another source.

“It is gratifying to see that all of the money, expertise and hard work that goes into building these systems results in something that is shared for the global good.”

For NOAA-20, the European satellite agency EUMETSAT or NOAA can receive and process the data, uplink it to a telecommunications satellite, and then beam it back down on a signal similar to that of a digital television.

Rebroadcasting is not done directly at SSEC, Gumley says, but the center does assist EUMETSAT with some of the data to rebroadcast it over Europe as part of a system called EUMETCast.

“It is gratifying to see that all of the money, expertise and hard work that goes into building these systems results in something that is shared for the global good,” Gumley says.

Data from satellites like NOAA-20 also play a key role in decision-making, especially when time is of the essence. Scientists like Gumley are critical to that endeavor.

Satellite Data Services at SSEC ingests and archives daily data from numerous satellites. With almost immediate access, Gumley and colleagues can view and analyze satellite data streams and imagery in 15 minutes or less.

In fact, his team developed a suite of software called the Community Satellite Processing Package (CSPP) that can be downloaded from the program’s website, without cost or restriction, aimed at supporting the decision-making process in the U.S. and making it more economical for other countries. 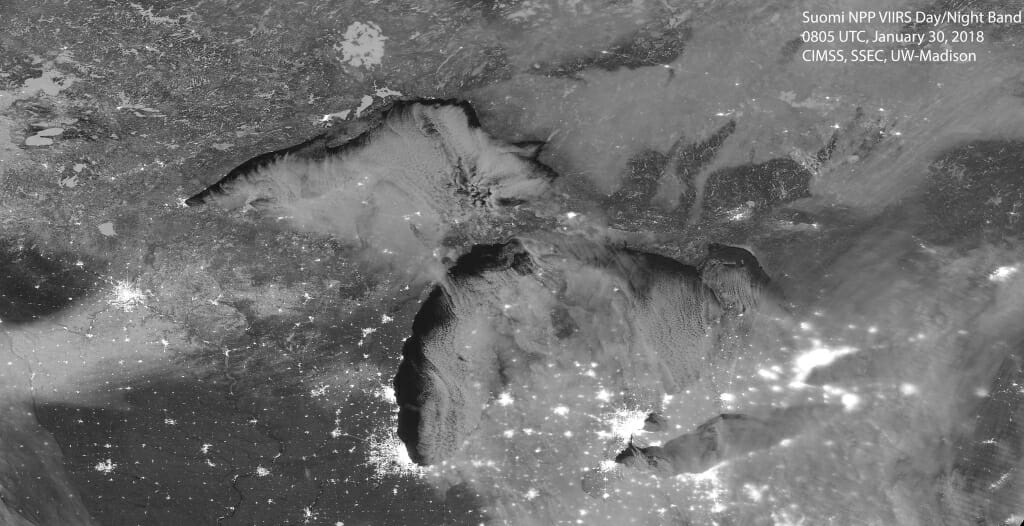 The Great Lakes region early on the morning of Jan. 30, 2018 via the Suomi NPP VIIRS Day/Night Band. Data acquired and processed via SSEC direct broadcast antenna.

As part of a community effort, SSEC and partner sites have developed CSPP products that convert digital satellite signals into usable information. The products can be used to detect fires, gain information about temperature and water vapor, assess vegetation and more. The data can aid in weather forecasting and disaster response.

The immediacy it affords users, like NOAA’s National Weather Service, allows them to quickly assess situations that could affect public safety. For example, the VIIRS Day/Night Band on NOAA-20 can detect nighttime fog in valleys. If low-level fog is blanketing a highly traveled interstate, forecasters can quickly inform the state highway patrol or other relevant agencies to alert drivers of diminished visibility.

Or, notes Gumley, “fires can be spotted from satellite images, too. If we see a fire at a particular latitude and longitude, we can notify fire protection agencies so that they can dispatch personnel.”

Researchers are also using these data to study global processes over an extended period of time (20-30 years) to determine climate trends. For example, scientists have already determined that clouds are one important variable in the global radiation budget. For today, says Gumley, the question is: “Are we seeing more or less high clouds as a result of climate change?” 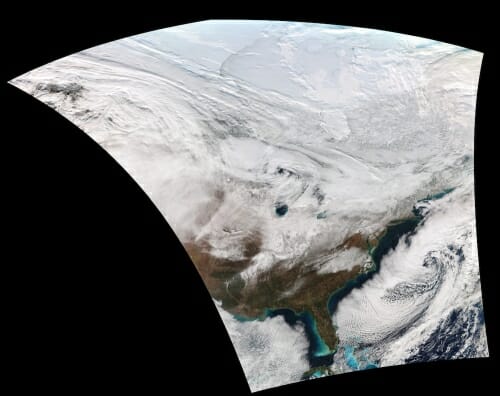 NOAA-20 will continue these and other types of observations collected and archived from previous generations of satellites for the last 25 years, which makes identifying trends more reliable.

Additionally, Gumley’s group is part of the ground team tasked with characterizing the data from NOAA-20 for its completeness, validity, accuracy and consistency. Starting three days after launch, and as sensors onboard the spacecraft were turned on, his team has worked with NASA and NOAA to ensure the integrity of several terabytes of data each day.

“Now that NOAA has given the go-ahead,” says Gumley, “we are supplying it to NWP centers so they can start evaluating the NOAA-20 data, too.”

Tracing back to Suomi NPP and extending to NOAA-20, SSEC also continues to be involved in a contract with NASA to create atmosphere products that support long-term climate study, called Science Investigator-led Processing Systems (SIPS). It is the only one of six groups involved in SIPS development that is based outside of NASA.

For Gumley, it is rewarding to work within a global collaboration where despite differing environments and locations, everyone receives the same data and is interested in using it for improving forecasts and studying environmental conditions.

“It’s not just the U.S., but because of its example, all the major satellite operators are participating,” he says.