Late Wednesday night (Aug. 31), a shiny white aircraft with a wingspan of roughly 120 feet soared aloft from Wallops Island, Virginia. Following takeoff, the aircraft — a high-altitude drone known as a Global Hawk — flew patterns off the east coast of the U.S., tracing two big loops as it headed south toward Florida’s west coast. Its destination: Tropical Storm Hermine in the Gulf of Mexico.

Meanwhile, scientists at the University of Wisconsin–Madison Space Science and Engineering Center (SSEC) and the associated Cooperative Institute for Meteorological Satellite Studies (CIMSS) who help coordinate the flight of the unmanned aircraft were at the ready. They were waiting for data from the drone that would help them and other scientists determine whether the storm was likely to intensify into a hurricane before making landfall near Florida’s panhandle, as well as help predict what the storm was apt to do afterward. 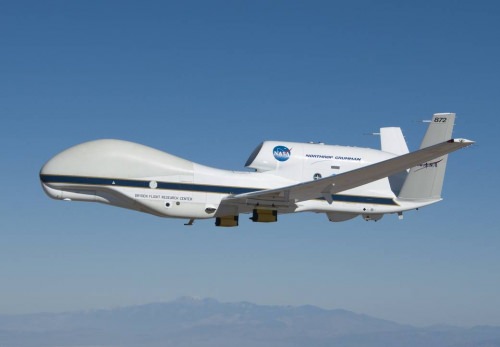 The Global Hawk is part of a three-year experimental mission focused on studying whether the drone can improve hurricane analysis and forecasting in an economically feasible way. NASA Photo

Hermine was upgraded to a hurricane later in the afternoon of Thursday, Sept. 1, just before making landfall on Florida’s west coast. It is eventually expected to head back over the open waters of the Atlantic Ocean and forecasters are working to predict what it will do next. The Global Hawk may be a key part of that effort, providing the National Weather Service with better information to help make those predictions.

“The models initialized using the data we are gathering now with the Global Hawk will affect that forecast, even though it’s three or four days away,” says Chris Velden, the lead scientist on the CIMSS Tropical Cyclone Team, which is exploring the use of the Global Hawk for the study of tropical storm systems.

Historically, hurricane forecasters have a harder time tracking the evolution of storms as they move back over water after a landfall.

Overnight, the aircraft flew a series of sweeping “butterfly” patterns above and around the storm, 55,000-to-60,000 feet above the Earth’s surface — high enough to achieve a bird’s eye view of the system and avoid its potentially damaging thunderstorms and high winds, while close enough to drop roughly 85 sensors in and around the heart of the storm. The sensors, called “dropsondes,” provide an atmospheric biopsy, giving real-time data from the storm, including moisture, pressure, temperature and wind speed as they descend through the storm. 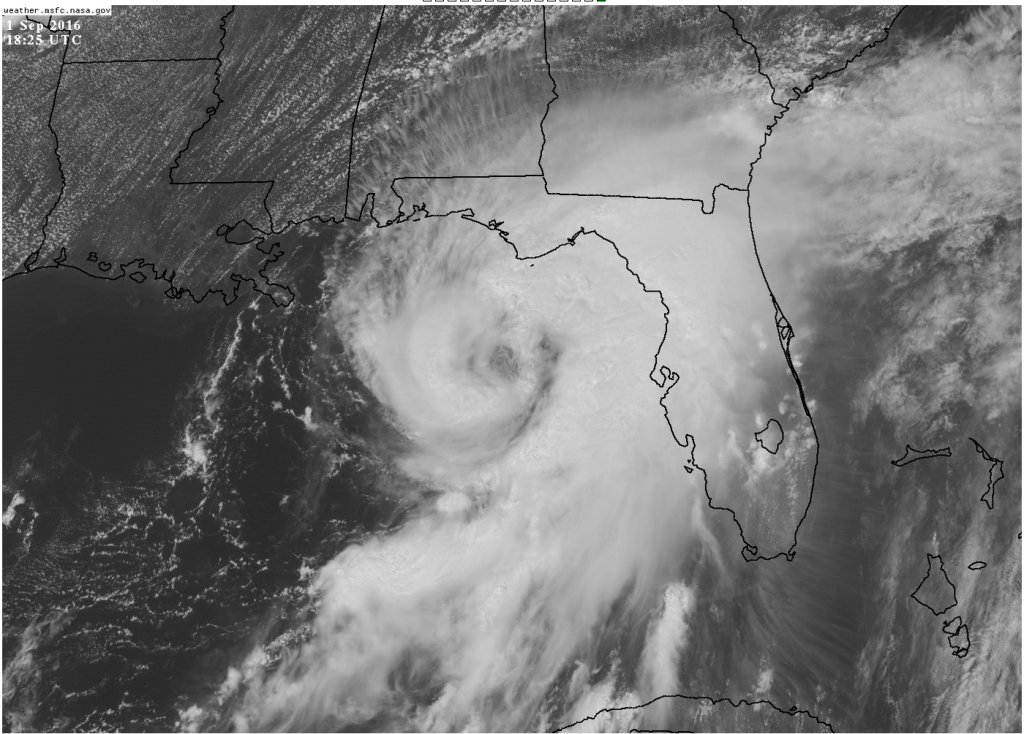 Hurricane Hermine off the west coast of Florida on Sept. 1, 2016. The storm was upgraded from a tropical storm to a hurricane just before making landfall. Photo courtesy of Chris Velden

“The Global Hawk passed over the center of Hermine a number of times,” says Derrick Herndon, a CIMSS scientist on the team. “The data showed strong upper-level southwest winds that could impact the storm later today, and also showed that the upper-level outflow from the storm is well-developed.”

This outflow is like the exhaust mechanism of the storm. It is a measure of the ability of the storm to intensify, revealing the efficiency of its “engine.”

The Global Hawk is part of a three-year experimental mission called SHOUT, for Sensing Hazards with Operational Unmanned Technology, from the National Oceanic and Atmospheric Administration (NOAA) in partnership with NASA, focused on studying whether the drone can improve hurricane analysis and forecasting in an economically feasible way.

The Global Hawk was first used by NASA in 2013 for its HS3 mission, the Hurricane and Severe Storm Sentinel, which was focused on studying how tropical storms form and gain intensity.

Unlike manned aircraft, the Global Hawk is capable of flights lasting 24 hours, allowing researchers and forecasters to study storms as they undergo changes in ways manned craft cannot. They also provide data that satellites cannot achieve.

Plus, says Herndon: “The drone doesn’t get tired.” 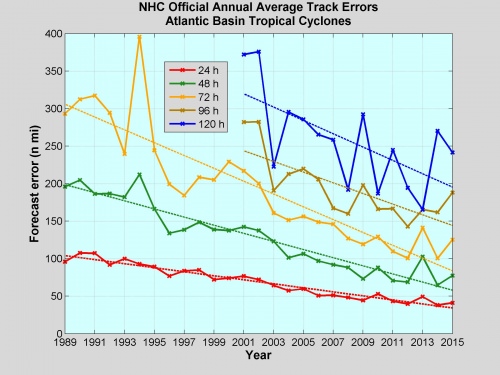 The ability of forecasters to predict the track of tropical cyclones (which includes hurricanes, tropical storms and tropical depressions) has largely improved over the last several decades. Click to enlarge. Courtesy of Chris Velden

And because the Global Hawk can fly so high, it is providing scientists like Herndon and Velden, who are part of SHOUT, with data from layers of the storm they have never been able to explore before. 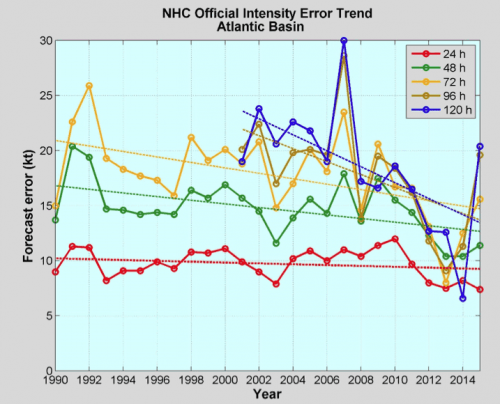 While the ability of forecasters to predict the track of tropical cyclones (which includes hurricanes, tropical storms and tropical depressions) has largely improved over the last several decades, their ability to predict the intensity of a storm has not kept pace, though recent years have brought improvements. Click to enlarge. Courtesy of Chris Velden

“Historically, the regions above a hurricane’s cloud canopy is void of hard data, so we are hopeful it will improve our computer forecast models,” says Herndon.

Critically, the computer models help forecasters predict where storms will go and how strong they will be if they make landfall. They rely on high-quality data that depict storm structures, as well as the physics of how storms evolve. More and better data typically mean better, more accurate models.

For each new tropical storm of interest during SHOUT, researchers can identify sensitive areas of a storm where extra data may help forecasts. Scientists can then direct the Global Hawk to those regions in and around the storm.

While forecast models have greatly improved with respect to where storms will go, Herndon says that over the last several decades the ability of scientists to predict storm intensity has not kept pace. He and Velden hope the Global Hawk data will make a difference.

The drone first flew into Hermine on Aug. 30 and the data it gathered was assimilated into models that showed a higher likelihood the storm would intensify into a hurricane before landfall on the Florida coast. While Herndon is concerned about the impact a hurricane could have where it makes landfall, Hermine offers a chance to show that the data Global Hawk provides to computer models is reliable, and that the missions are worthwhile.

“Lives are at stake during a hurricane and it’s very satisfying to see our data and the products we’ve developed used to help strengthen predictions.”

“In terms of any preliminary good news, the models seemed to do a good job in assimilating the data and it’s gratifying in terms of the effort that has been spent on this,” he says.

Some U.S. models do not yet incorporate data from Global Hawk in real time but the primary European model does, Herndon says. However, the NOAA National Hurricane Center (NHC) can use the data experimentally in making its official predictions. The NHC also relies on other products developed and provided by CIMSS and SSEC to analyze and monitor tropical storm systems, mainly from satellites.

“We’re researchers, not a 24-hour support team, but people use our products 24 hours a day,” says Herndon. “Lives are at stake during a hurricane and it’s very satisfying to see our data and the products we’ve developed used to help strengthen predictions.”

Especially now, he adds. Florida hasn’t been hit by a hurricane in over a decade.

“There are people there who have never been in a hurricane before. They are not familiar with what the threats are,” says Herndon. “Freshwater flooding and storm surge kill many more people than winds.”

The NOAA SHOUT project began in 2014 and will wrap up this hurricane season. The participating UW–Madison CIMSS Tropical Cyclone Team includes Velden and Herndon, as well as Tim Olander, Dave Stettner, Tony Wimmers and Sarah Griffin.