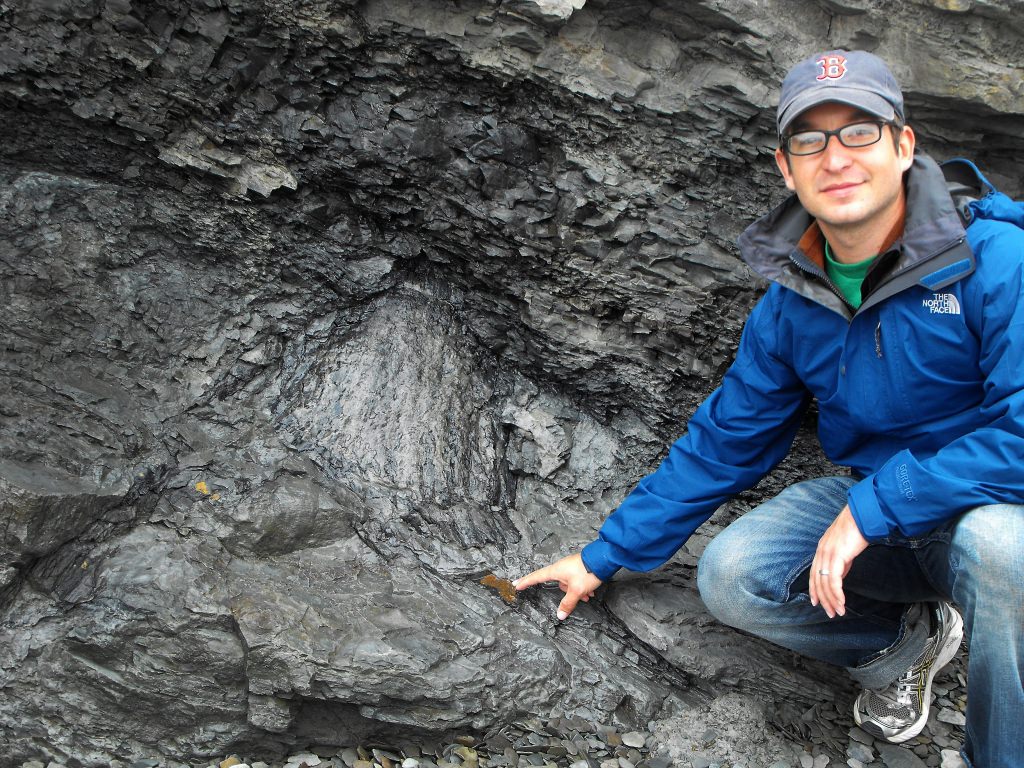 For the development of animals, nothing — with the exception of DNA — may be more important than oxygen in the atmosphere.

Oxygen enables the chemical reactions that animals use to get energy from stored carbohydrates — from food. So it may be no coincidence that animals appeared and evolved during the “Cambrian explosion,” which coincided with a spike in atmospheric oxygen roughly 500 million years ago.

It was during the Cambrian explosion that most of the current animal designs appeared.

In green plants, photosynthesis separates carbon dioxide into molecular oxygen (which is released to the atmosphere), and carbon (which is stored in carbohydrates).

But photosynthesis had already been around for at least 2.5 billion years. So what accounted for the sudden spike in oxygen during the Cambrian?

A study now online in the February issue of Earth and Planetary Science Letters links the rise in oxygen to a rapid increase in the burial of sediment containing large amounts of carbon-rich organic matter. The key, says study co-author Shanan Peters, a professor of geoscience at the University of Wisconsin–Madison, is to recognize that sediment storage blocks the oxidation of carbon. 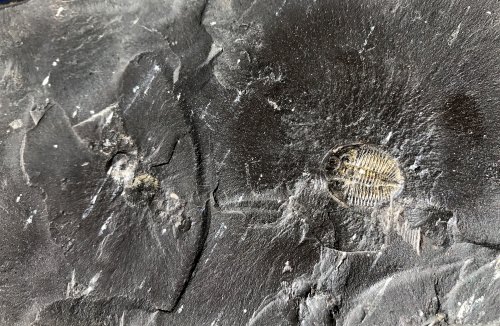 This black shale, formed 450 million years ago, contains fossils of trilobites and other organic material that helped support increases in oxygen in the atmosphere.

Without burial, this oxidation reaction causes dead plant material on Earth’s surface to burn. That causes the carbon it contains, which originated in the atmosphere, to bond with oxygen to form carbon dioxide. And for oxygen to build up in our atmosphere, plant organic matter must be protected from oxidation.

And that’s exactly what happens when organic matter — the raw material of coal, oil and natural gas — is buried through geologic processes.

To make this case, Peters and his postdoctoral fellow Jon Husson mined a unique data set called Macrostrat, an accumulation of geologic information on North America whose construction Peters has masterminded for 10 years.

The parallel graphs of oxygen in the atmosphere and sediment burial, based on the formation of sedimentary rock, indicate a relationship between oxygen and sediment. Both graphs show a smaller peak at 2.3 billion years ago and a larger one about 500 million years ago.

“Why is there oxygen in the atmosphere? The high school explanation is ‘photosynthesis.’ But we’ve known for a long time … that building up oxygen requires the formation of rocks like black shale.”

“It’s a correlation, but our argument is that there are mechanistic connections between geology and the history of atmospheric oxygen,” Husson says. “When you store sediment, it contains organic matter that was formed by photosynthesis, which converted carbon dioxide into biomass and released oxygen into the atmosphere. Burial removes the carbon from Earth’s surface, preventing it from bonding molecular oxygen pulled from the atmosphere.”

Some of the surges in sediment burial that Husson and Peters identified coincided with the formation of vast fields of fossil fuel that are still mined today, including the oil-rich Permian Basin in Texas and the Pennsylvania coal fields of Appalachia. 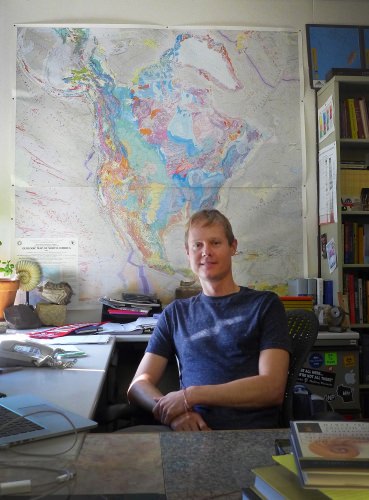 “Burying the sediments that became fossil fuels was the key to advanced animal life on Earth,” Peters says, noting that multicellular life is largely a creation of the Cambrian.

Today, burning billions of tons of stored carbon in fossil fuels is removing large amounts of oxygen from the atmosphere, reversing the pattern that drove the rise in oxygen. And so the oxygen level in the atmosphere falls as the concentration of carbon dioxide rises.

The data about North America in Macrostrat reflects the work of thousands of geoscientists over more than a century. The current study only concerns North America, since comprehensive databases concerning the other 80 percent of Earth’s continental surface do not yet exist.

The ultimate geological cause for the accelerated sediment storage that promoted the two surges in oxygen remains murky. “There are many ideas to explain the different phases of oxygen concentration,” Husson concedes. “We suspect that deep-rooted changes in the movement of tectonic plates or conduction of heat or circulation in the mantle may be in play, but we don’t have an explanation at this point.”

Holding a chunk of trilobite-studded Ordovician shale that formed approximately 450 million years ago, Peters asks, “Why is there oxygen in the atmosphere? The high school explanation is ‘photosynthesis.’ But we’ve known for a long time, going all the way back to Wisconsin geologist (and University of Wisconsin president) Thomas Chrowder Chamberlin, that building up oxygen requires the formation of rocks like this black shale, which can be rich enough in carbon to actually burn. The organic carbon in this shale was fixed from the atmosphere by photosynthesis, and its burial and preservation in this rock liberated molecular oxygen.”

What’s new in the current study, Husson says, is the ability to document this relationship in a broad database that covers 20 percent of Earth’s land surface.

Continual burial of carbon is needed to keep the atmosphere pumped up with oxygen. Many pathways on Earth’s surface, Husson notes, like oxidation of iron — rust — consume free oxygen. “The secret to having oxygen in the atmosphere is to remove a tiny portion of the present biomass and sequester it in sedimentary deposits. That’s what happened when fossil fuels were deposited.”