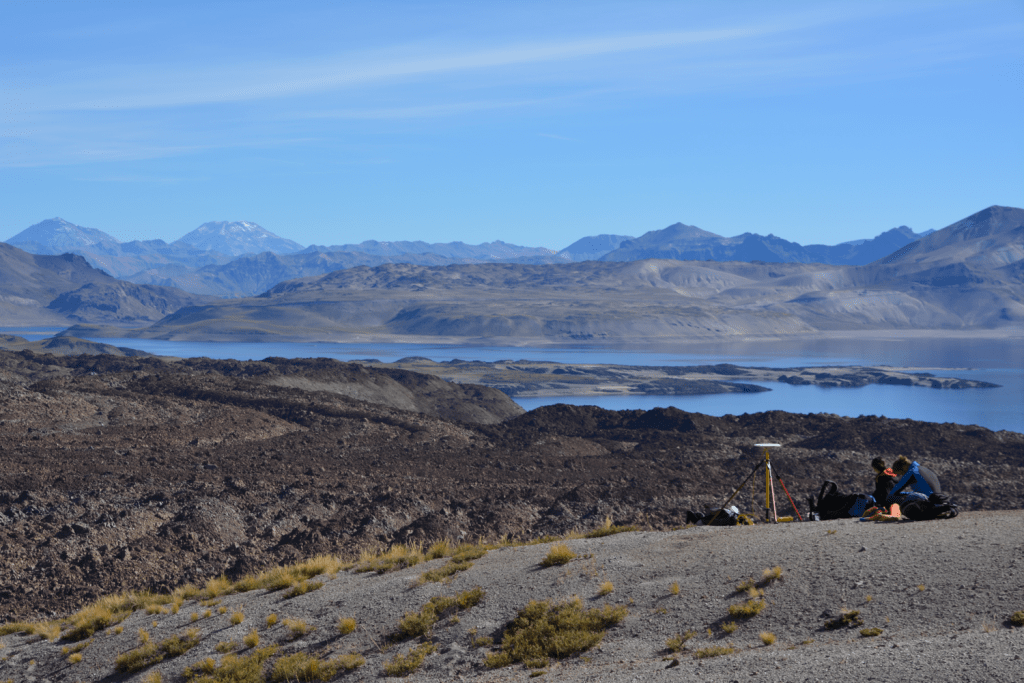 In a scene dominated by volcanism and erosion, Hélène Le Mével (left) and a colleague set up a precision GPS station to measure altitude of a portion of the ancient shoreline of Laguna del Maule, Chile. Photo by Brad Singer

The Laguna del Maule volcanic complex in Chile is a large, complicated and explosive landscape that, oddly, lacks the classic cone seen on many volcanoes, including Fuego, the Guatemalan volcano that killed hundreds in a June 3 eruption.

It’s a major task to understand a mountaintop region that has erupted 50 times over the past 20,000 years. But the starting point for grasping the big picture of a study published today (June 27) in Science Advances is pretty simple: It’s the ring that standing water leaves on a bathtub.

Like the shore of an ancient lake, a bathtub ring must be horizontal when it forms. But, as University of Wisconsin–Madison professor of geoscience Brad Singer noticed years ago, the ancient, elevated shoreline at Maule now slopes from a low spot in the north to a high spot in the south. 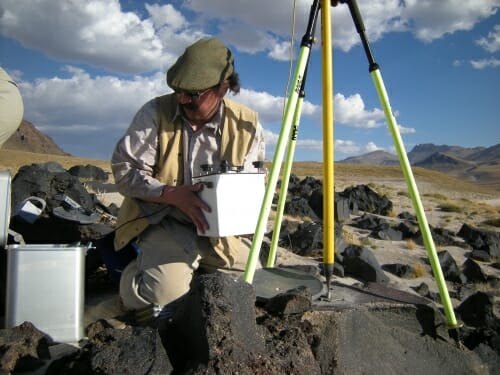 Basil Tikoff places a delicate gravity meter on bedrock on the east side of Laguna del Maule. Gravitational force is reduced when more hot, low-density magma gathers belowground. Tikoff, a UW–Madison professor of geoscience, is an author on the Science Advances paper. Photo by David Tenenbaum

The Maule volcanoes, located in a region that has seen enormous eruptions during the last million years, are restless. Since 2007, satellite instruments have measured an average uplift of 8 inches per year – far and away the fastest and longest measured rise of a restless volcano in the world, and an unmistakable sign that molten rock under the area is rising.

Singer, a volcanologist and specialist in dating rocks, currently directs a five-year National Science Foundation project to explore Maule with a wide variety of geologic techniques. Understanding why that rise is taking place, and what it portends, are two central goals of the project, which brought dozens of scientists and students to the site. 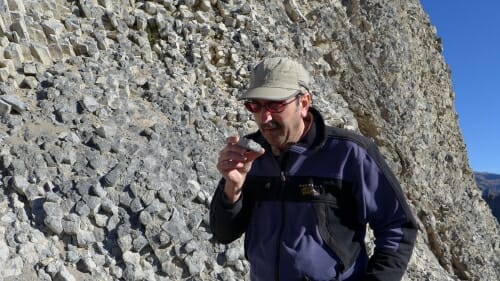 Generally, volcanology is a rearview-mirror exercise. Months, years, or even 50 million years after the lava cools and the ash settles, scientists examine the chemistry, shape, and distribution of rocks in a forensic effort to understand a volcanic site. At Laguna del Maule, among the most active volcanic regions in the world, Singer is trying to document conditions and processes before the next eruption.

Chile has more than 80 volcanoes. Maule, along with many others, erupts rhyolite, a particularly explosive kind of molten rock. Rhyolite contains a high level of water and carbon dioxide, which both flash to gas as pressure drops when the magma approaches earth’s surface.

Knowing the rate and variations of magma rising into a reservoir beneath a volcano is critical to questions about future eruptions, but measurements of rock properties up to a dozen miles underground must, by definition, be indirect.

The goal, Singer says, “Is to build a mental picture, a model, for the mechanisms that operate before a large, or ‘super’ eruption.”

The study in Science Advances used the ancient shoreline for baseline information about the area’s landscape 10,000 years ago. That was when a rhyolite lava flow that “plugged” the lake’s outlet collapsed, dropping the water level by about 200 meters down to its present level.

The relic shoreline was at least 60 kilometers long, although much of it has since been covered by lava flows. During four field trips, Singer and colleagues used precise GPS instruments to get altitude measurements at 64 points along the shoreline.

The highest point, they found, was 62 meters above the lowest point, allowing the researchers to calculate an average rise of 6 millimeters per year. But if the current rapid uplift following a period of stability is typical, the total uplift likely occurred in as many as 16 rapid pulses, averaging 50 years each, during the past 10,000 or so years.

The baseline information on uplift was then combined with data on earth shaking, gravity and electrical conductivity, and analyses of minerals at the surface – the relics of past eruptions – to paint a better picture of the geologic situation.

Hélène Le Mével, a UW–Madison geoscience Ph.D. and paper co-author, used the warping of the shoreline to estimate the shape, size and depth of the magma body that grew beneath the southern end of the lake. The body is 7 kilometers deep and has a shape something like an egg.

Since the natural lava dam burst and the lake level fell, the researchers calculated that 13 cubic kilometers of magma rose into this reservoir to create the magma body that raised the overlying volcanic region. 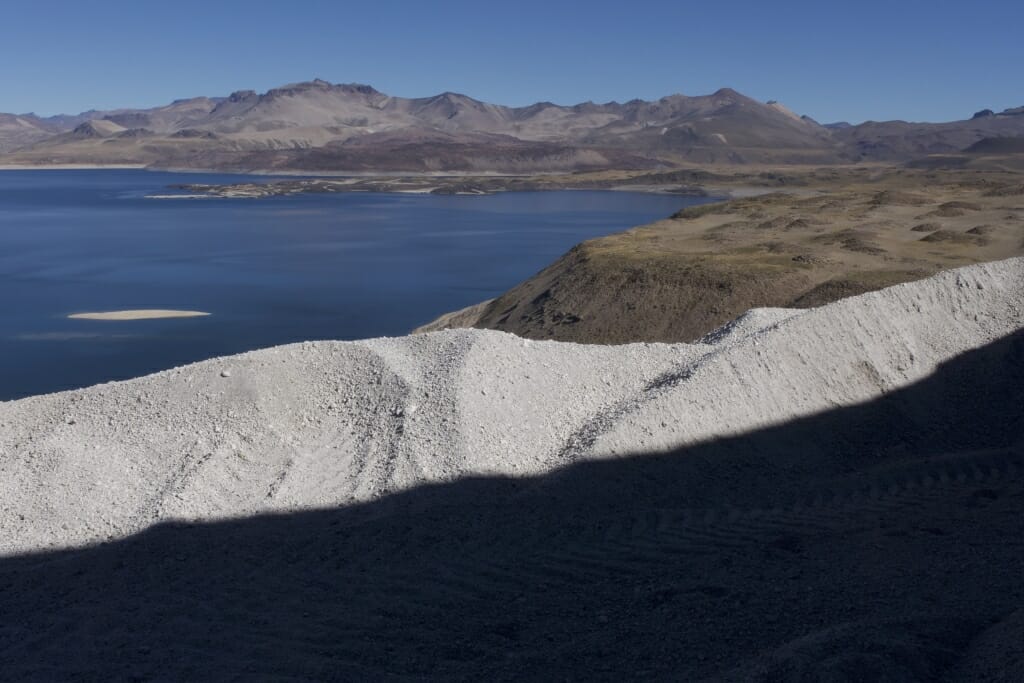 Laguna del Maule is the focus of intense volcanism in the Andes Mountains in central Chile. Photo by David Tenenbaum

The shoreline that has warped due to underground magma intrusion over the past 10,000 years is visible. Photo by David Tenenbaum

In the same period, another nine cubic kilometers of magma has erupted.

A clarified view of the pace and details of the uplift helped Singer’s team address two pressing issues in volcanology:

As for Maule itself, the rate of rise seems to be slowing after 11 race-car years. That likely reduces the probability of an eruption in the near term, which is good news to Chileans, and to Argentines, who live downwind from this border-straddling complex.  Maule’s alert status is currently low on the list of more than 40 hazardous volcanoes that Chile’s Southern Andes Volcano Observatory monitors.

But that’s not the end of the story, says Singer. Even if the magma intrusions at Maule slowly grind to a halt, other factors could trigger an eruption.

Chile, part of the Ring of Fire, was site of two of the four most intense earthquakes in the past century. Moreover, even as uplift declines, an earthquake along a small local fault could promote enough movement of magma to trigger another eruption at Maule, Singer says.

This research was supported by U.S. NSF grants EAR-1411779 and EAR-1322595, OVDAS/SERNAGEOMIN, and the USGS Volcano Disaster Assistance Program.