Fine-tuning a new crop that saves soil, produces grain and forage for cows 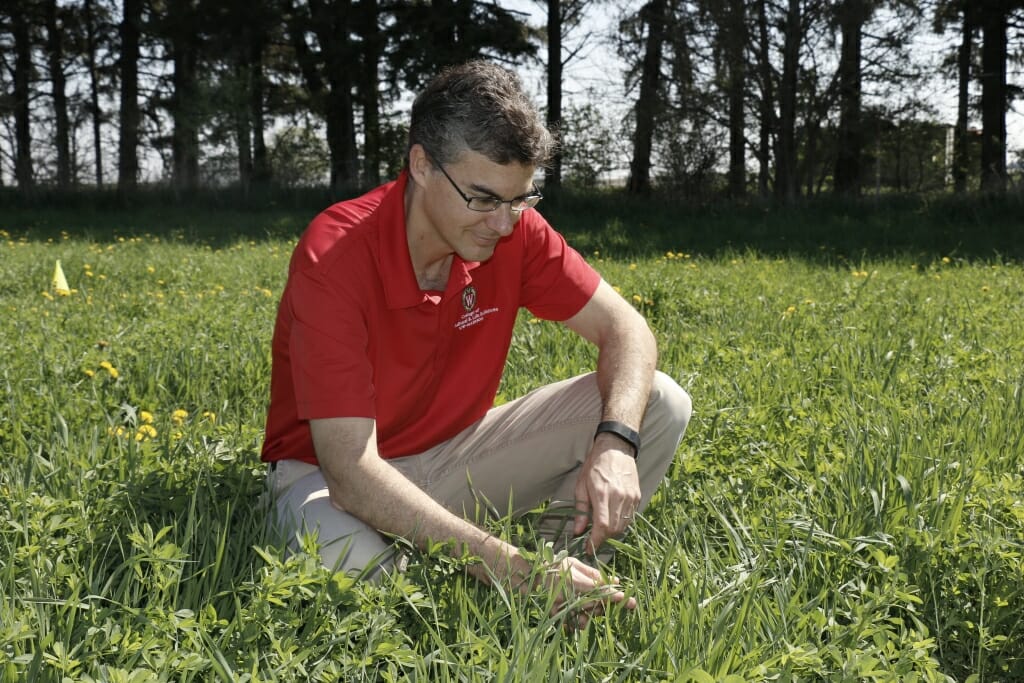 Valentin Picasso, an assistant professor of agronomy at UW–Madison, is unraveling the potential of intermediate wheatgrass, a perennial grass that produces grain, and can be baled or grazed for hay. Like many of his experiments at Arlington Agricultural Research Station, these grow kernza along with legumes, to improve soil holding and replace nitrogen fertilizer. Photo by David Tenenbaum

On a splendid May day, Valentin Picasso is visiting tests of a crop called kernza at the Arlington Agricultural Research Station north of Madison. As a perennial, kernza must survive the winter, and that is what the assistant professor of agronomy at University of Wisconsin–Madison is checking.

Developing kernza is part of a vision to shift an agricultural economy reliant on “till-plant-harvest and repeat,” toward a one-time tilling and planting, followed by harvesting forage and grain for years or decades. The forage – hay — can be baled or fed directly to cattle in the spring and fall.

Annual crops require annual tillage, which often leaves the soil bare all winter and into the spring. Although no-tillage techniques and cover crops can provide some soil cover, perennial crops and forages are the ultimate long-term solution to soil erosion, Picasso says. Once planted, perennial kernza covers soil year-round without the cost of further tillage. 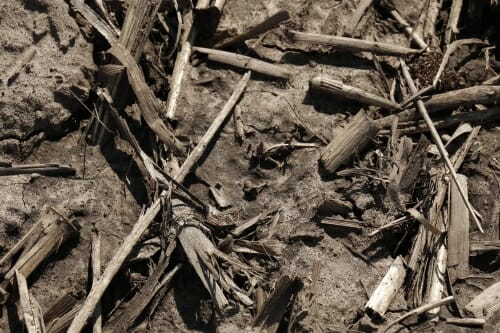 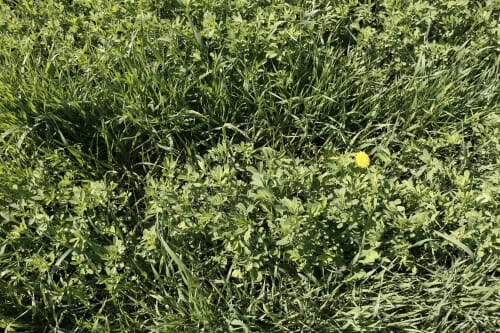 Kernza and alfalfa were planted in fall, 2016. The contrast shows one advantage of perennials like kernza, which cover the ground year-round. Photo by David Tenenbaum

At more than 300 small plots at Arlington, Picasso is testing kernza with variables such as planting dates, seed varieties, and the effect of leguminous companion crops like alfalfa.

Kernza, generically intermediate wheat grass, was developed by the Land Institute, a Kansas environmental non-profit that trademarked the brand “kernza.” Those who sell seeds under that name must pay royalties; seeds of the same crop, sold as intermediate wheatgrass, are exempt from royalty.

The interest in intermediate wheatgrass, and other perennials like silphium and lupine, reflects a small-scale effort to reverse what Picasso wryly calls “a little mistake at the dawn of agriculture 10,000 years ago.” The decision to domesticate annual plants instead of perennials can leave bare soil prone to erosion and allow soil and nutrients to run off in the rain, causing water pollution.

To date, kernza breeders at the Land Institute and the University of Minnesota have used time-tested approaches such as selecting and replanting the largest seeds, to turn an idea into a crop. No genetic modification technologies are used.

Although the grain yield of the new crop cannot compete with corn or soybeans, its yield has tripled in just 10 years, Picasso says, to a maximum of 900 pounds of grain per acre in Wisconsin fields.

“Kernza is only in the fourth cycle of selection, and we have been selecting the major crops for at least 5,000 years,” he says. “In another 10 years, we expect to see a much higher yield that will look more like a traditional crop, with the advantage of being perennial.”

Kernza leaves and stems have a high nutritive value for cattle, especially in spring and fall, which makes it more valuable to farmers as a dual-purpose (grain and forage) crop.

Picasso is working on several research questions about the new crop:

Kernza does not flower and set seed the first year, because it needs to endure winter before flowering, but that could change in a crop that is still genetically malleable. While leaving the farm, Picasso points out where he gathered seeds from a hundred-odd plants that, strangely, did produce grain the same year they were planted. He is planting these unusual seeds in a new experiment aimed at developing a crop that can produce grain even before a winter.

Forages are extremely valuable, but their economic contribution is difficult to measure, Picasso says. The total value of marketed hay and related products in Wisconsin was $816 million in 2017, according to the National Agricultural Statistics Service, “but that does not come close to the full value of forages, as this is only forage that is sold. Most forages are grown and fed on the same farm, and therefore not counted.”

A comprehensive estimate of the value of forages would consider that at least half of dairy and beef feed comes from hay such as alfalfa. In reality, Picasso says, “If you want to estimate the value, you should also add the economic value of clean water, and maintaining soil and biodiversity.”

Although Picasso says the kernza project is “in the infancy of research,” he adds that, “Wisconsin’s climate and soil are ideal, and the research benefits from a strong tradition of agricultural research.”

At field days at the Lancaster and Arlington Research Stations, Picasso adds, “farmers are really excited about kernza. There’s already some on-farm research, which I think will grow in the near future. We still have dairy farmers who know how to grow and graze crops, who know how to produce forage and grain, and are open-minded about trying new things.”